I haven't been writing, but I have been thinking. A lot.

I'm preparing to start a new book, the first in a new series, and I've been feeling for a while that I want this series to be different somehow. I just haven't been able to define different. I feel like I need to write something more. By that, I mean something with more depth, more to say. Maybe. The problem is, I still want romance, and I still want mystery. I don't want to switch from genre fiction to literary fiction.

This urge might have something to do with my general overall mood. When I wrote Unwritten Rules, I was a new empty-nester, work was going great, and I had life by the tail. I could try to be funny. For the past couple of years, humor has eluded me. I really struggled with the final book in my female bodyguard series, and while I love the final result, I know it isn't as funny as the previous two. 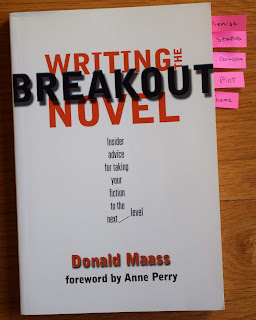 In an effort to find the right tone for the new series, I've been re-reading Donald Maass's brilliant book, Writing the Breakout Novel. I'm not trying to "break out" in the way he means--signing with a top agent, scoring a six-figure contract--but I am looking to add depth to my work. Several years ago, I attended one of his day-long workshops based on this book and found it very instructive. He puts into words many of the principles most of us sense about writing but never mange to articulate. The book was published in 2001, so some of the advice is dated, but much of it is still pertinent. I recommend you read it for yourself, but I thought I'd share some of the highlights I hope to incorporate into my next book.

Plot
Conflict in the breakout novel is meaningful, immediate, large-scale, surprising, not easily resolved and happens to people for whom we feel sympathy.

This all sounds pretty lofty, especially for what may turn out to be another quirky romantic mystery, but it has helped me think about my characters and my story in a new, deeper way.

Maass makes it sound so easy, doesn't he? It takes a huge amount of thinking, planning and executing to come up with all those elements and blend them seamlessly into a story. I know what you mean about wanting to write "more," Alison, and I think that's the perfect word. I've been feeling the same for a long time. Sounds like you're on the right track to finding your path. Keep at it!

I identify, for sure. Maass's way has a blood out of a turnip feel, authenticity is in question. I like it when a concept 'comes to me.' A little magic, a little luck, a challenge, perhaps. Still, I just found myself making it too easy on the character I'm writing about, so his reminder that our heroes do things we would never be able to do...makes sense.

Anyway thanks for the reminder of his principles, Alison. I needed that...and posted them on my two upcoming series as reminders...goals...teasers.

When it comes to writing, thinking is doing. 'Think of the very worst thing that can happen and make it happen.' I took a day long Maas workshop too. Filled a notebook with notes I implemented, I think, in my at the time wip. Rolynn's right, a little magic, a little luck and DONE. Best of luck with this, I'm sure you'll figure it out. Just enjoy it while you do.

Thanks for the review. Always good to keep these principles in mind.

I have that book packed away. It was my bible for a while with lots of underlines and crinkled pages. I need to find it and reread. You're right. He makes it sound easy but he's very good at inspiring. The first I hear do him was a day long workshop many years ago. Might be we were in the same room, in Bloomington I think. Anyway, I hated him. I was writing my lighthearted romantic suspense and he was telling me to kill someone off. To make my heroine suffer. I took him quite literally and I thought he was too uppity. I took home the notes and my bad attitude. Then I took a few weeks to think about what he said and how I could apply it to any story. I came around. Bought the book. He's now inspirational to me. Thanks for a great post and good luck. You'll no doubt end up with something "deeper".

Really interesting advice about the breakout novel premise. I felt like I did that with Book 1 of my new series, at least when it came to inherent conflict and originality. Then the editor I talked to said publishers don't want originality. She wanted conformity to take me, as an author, to the breakout level of sales. Maybe my main female character doesn't have that gut emotional appeal Maass says is critical--that was her take, anyway. Reading his bullet points felt like reading a playlist for writing the next Dan Brown novel with world and personal conflict and the good guy struggling to save humanity. I've thought about writing that sort of thriller. I'm kind of tired of writing love scenes--they all feel the same after 20+ books. But after working hard to carve out a tiny spot for myself in romantic suspense, I don't know if trying to reach a different audience is a smart move. Definitely something to think about. I hope all this contemplation has encouraged you to dig into the actual writing of your book, Alison!

It's fine to be told all that, but from what I can see breaking out, so to speak, is a matter of promo. That's my 2 cents Alison. I don't think it matters how terrific you are; without widespread promo, no one will know.

Thanks, Leah. I don't know if the "more" will show up in the first draft, I'll have to try to add it later, or I'm not capable of it. Only time will tell.

Rolynn, I'm keeping Maass's book on my desk with tabs marking the sections. I don't know if I'll open it again during the writing process, but it was useful to re-read it before I started.

Margo, I'm having fun with the story so far, and that's always a good sign.

Brenda, I had exactly the same response (and I'm sure we were in the same room.) I didn't expect to use those principle in my "type" of book, but like you, I've found there are pieces of very useful advice there.

Jannine, I accepted right up front that I wasn't trying to write the same type of "breakout" novel he was talking about (you're right about the Dan Brown comparison.) I'm looking to boost what I'm already writing instead of trying to turn into somebody else. As for what that editor told you, however, I don't think any writer is going to break out by conforming. There's simply too much of everything out there. You have to find that certain element that makes your work stand out in some way. So far, I've re-written the first 43 pages of my book. I don't know how different it's going to be yet, but I'm trying to keep Maass's challenges in mind as I go forward.

Andi, I don't know that breaking out is ALL about promo, but it's certainly A LOT about promo.

I'll have to check this book out. Thanks

I need to read that book again. I took a workshop by Maas and, like Margo, wrote pages of notes. The thing I remember most that he did. He made us write down the worst thing that could happen to our character. Waited while we wrote, then said "what's worse than that?" We thought & wrote. Then he had us do it again. Twice more, I think. Upping the stakes. I need to rethink my current WIP (which is temporarily stalled).

Writing humor is not easy. It can't be forced. I've lost some of my humor in my later books. Maybe it's me and my moods. I can feel when I'm trying too hard. Good luck on your new series. I'm sure it will be great.