Goodbye and Farewell by Andrea Downing

For some reason the song “So-long, farewell, etc. etc” from The Sound of Music is going through my head—probably because this is my last post here at The Roses of Prose.
Good-byes are always difficult, no matter what the situation.  I was in London last week for a wedding, which was happily followed by seven days of nonstop visiting with old friends from when I lived there. After the final dinner with one, I burst into tears because we happen to be at that age where ‘ya never know.’ But let me not get too morbid.  Here on the Roses’ blog, we’ve had some pretty good times, many laughs, shared a lot of important information, and hopefully made friends for the future. As Thanksgiving approaches, I find I have a lot to be thankful for.
And the best good-byes are brief so I won’t linger.  It’s been highly enjoyable for me and I’ve appreciated all the support over the months, and reading everyone’s thoughts, both in their own posts and in comments. So, farewell everyone!
Oh, but it wouldn’t be an author’s post without one more thing.  I know my fellow Roses will be entertaining you with their Christmas stories throughout December, but let me also mention my latest before I go, available at https://www.amazon.com/Christmas-Cowboy-Keep-Contemporary-Collection-ebook/dp/B07JF6LYWD/   Curl up with some great Christmas reading: 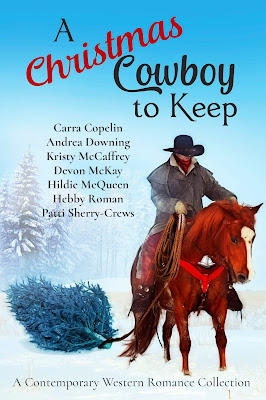 The weather is cold, the atmosphere is festive, and the cowboys are hot. How do you keep a cowboy at Christmas?

CHRISTMAS, LIBERTY, AND THE THREE MINUTE MAN by Carra Copelin
Nashville event planner Liberty Ann Hart has come to Mistletoe, Texas, to set up and promote a Christmas fundraiser for country music star Lilah Canfield. She tries not to fall for the local carpenter building the outdoor stage, but his cowboy charisma is hard to ignore.
Daniel Dylan Layman is happy to live his life in obscurity in Mistletoe, until a sassy, headstrong woman removes her shoe and beats an ATM machine for eating her debit card. From that moment, he’s determined to show her a Texas country life away from the glitz and glamour of Nashville. 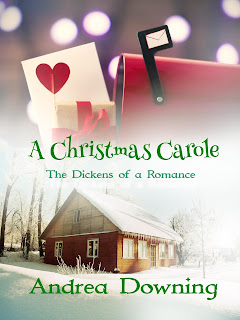 A CHRISTMAS CAROLE by Andrea Downing
When single mom Carrie Matheson inherits a Wyoming ranch and moves out of NYC, her six-year-old son is not happy. Trying to help Tim settle into life out west isn’t easy, especially when his pleas to Santa receive replies from a mysterious correspondent. Is it the crotchety ranch foreman upon whom she relies so much? Somehow, she doesn’t think so….
Tate Schrugge is amused by his new neighbor when she jogs over with some mis-delivered mail. But Tate has just finished with a long-term relationship, and the lithe blonde in front of him has just called him Scrooge.
If these two can get together, it might be the Dickens of a romance.

THE PEPPERMINT TREE by Kristy McCaffrey
Skye Mallory had always aspired to leave her family’s ranch, and she took pride in having achieved her dream of becoming a lawyer. But when an unexpected inheritance draws her home for the Christmas holidays, she’s surprised by a longing to set down roots in the wide-open meadows and woodlands of southwestern Colorado. Only one thing stands in her way—a cowboy who broke her heart nine years ago.
In high school, Joe Carrigan had admired Skye for her spirit and her intellect, but he had known she was destined for a life beyond ranching. Turning down her romantic overture had been the best course of action for them both. But now, he’s returned to the community he left years ago, and it’s inevitable that he’ll come face-to-face with his one regret in life—Skye Mallory. This time, however, he wouldn’t be so chivalrous.

THE DEVIL’S CHRISTMAS KISS by Devon McKay
Kristen Kelly is returning home with a new attitude. No longer the shy, awkward girl of her past, she’s determined to show the small town what she’s made of. Especially Cole Lawson. When she’s challenged by Cole at a holiday kissing booth, she finds the wicked cowboy hasn’t changed a bit. He’s still the most frustrating, infuriating, and tempting man she has ever come across.
The minute he sees Kristen again, Cole Lawson can’t believe his eyes. She’s the one girl he’s never forgotten but convincing her they belong together will take more than a Christmas kiss. Kristen doesn’t trust him but, this time, he’s determined to not let her go.

SLAY BELLS by Hildie McQueen
Big-city girl Carmen Dias is prepared for the worst when she accepts a writing assignment in rural Montana, but she’s pleasantly surprised by the jubilant atmosphere and warm welcome of the townspeople. Unfortunately, as she begins working on an article about their small-town Christmas festival, she discovers a dead body, putting her face-to-face with a local—and hunky—detective.
Weary from his all-work and no-play schedule, Detective Jared Bowden braces for a busy season helping at his family’s Christmas festival. When a beautiful writer arrives in town, his holidays immediately take a turn for the better. But a murder investigation, possible charges against him, and a pesky ex-girlfriend don’t exactly spell romance.
Can Carmen and Jared find love amidst the mayhem and sleigh bells?

THE BEST CHRISTMAS by Hebby Roman
Sofia Rossi travels to Texas to re-connect with her estranged teenage son, Aaron, who’s at a ranch rehab-center. An immigrant from Argentina, she has managed to thrive in the tough New York world of modeling. And she’s a survivor of an ill-advised liaison with a wealthy, married member of New York society. When her ex-lover manipulates their son into living with him, Aaron gets into trouble. Sofia will reclaim her son at any cost.
Gar McCulloch, after losing his wife to her high school sweetheart and his daughter to a drug overdose, believes his life is over. He dedicates himself to turning a dude ranch into a juvenile drug rehab-center. Selfless and with twenty years of juvenile counseling experience, Gar is a wizard at reforming other people’s kids, but he can’t forgive himself for his one failure… his daughter.
As two emotionally-damaged people come together to save Sofia’s son, neither feel they’re entitled to romance or happiness. Their mutual attraction and admiration come as a surprise and an unexpected joy, making this their best Christmas… ever.

COUNTING DOWN TO CHRISTMAS by Patti Sherry-Crews
Melody Evans grew up as the only child of a single mother, never putting down roots. Instead, they carried family traditions from home to home, none more precious than those surrounding Christmas. Romance? Melody has put a wall around her wounded heart and turned a cynical eye to the concept of happily ever after, despite making a living as a wedding planner.
Veterinarian Leland Jennings IV has roots long and deep at his family’s ranch in South Dakota. What he lacks, according to his meddlesome sister, is someone to settle down with. But he continues to hold out, nurturing an unwavering belief that there is only one woman out there for him. Christmas? It’s a holiday for children, not a bachelor living alone.
Once Melody and Leland get over their initial animosity, they come together like two pieces of a puzzle, sparking emotions and nostalgic memories that bring magic to the holiday season. But when tragedy strikes, will the budding romance become a case of the right person at the wrong time, or will they forge a new path together?

Goodbye, Andi. For now and for here anyway. This stint at The Roses of Prose has been great for me too. These friendships we’ve formed will go on. Best of luck with Carole.

Glad you had such a good time with friends in London...and yes, the effort to reconnect is so worthwhile. I am not good with goodbye's, so, like Margo, I have hopes we'll have ways to chat up each other in the future. This can be a lonely, befuddling business...writer friends are important. My formatter just sent me the doc on Fire is Nice and called it a POD. WTF? New term...felt ignorant...find out it means 'plain old documentation.' Really?

Your Cowboy anthology looks delightful. Happy sales to you all!

I don't feel that it's really goodbye. I think we'll be in touch, maybe not daily but as we can. It takes an effort, but it's worth it. Best of luck with the Christmas anthology!

Rolynn--POD might mean Print on Demand, one you can use to upload for print. Just a thought!

Nice post, Andi. It's been a long run. Rolynn, yes, POD is print on demand.

Thanks Margo. We'll no doubt be in touchnfrom time to time

Rolynn, my first contact here--memories of our days at the very first InD'Tale conference.. Maybe we'll do that again one day? And maybe you should tell the formatter POD means Print on Demand to you?

Leah, I hope you're right that we'll be in touch. Thanks!
I didn't see your comment before writing mine to Rolynn---yes, doesn't POD mean Print on Demand?

Brenda, we've had some good times here. May they continue!

Jannine, yes, that song is running through my head, too. Seems a long time ago that you were instructing me on how to load my posts without screwing up someone else's. Thanks for that. Keep singing :-)

Sorry to see the end of this blog, Andi. I can understand why it's hard to end, but I know you will keep in touch with all the good friends that you've made here. And what an honor, too, getting to leave the very last blog! Told you that you were the blog queen!

Hebby, it was MY last post here, not the very last one. The others continue through November and then have their Christmas stories posted, which I hope everyone will read! Thanks for stopping by.

I've already written my holiday story and am getting ready to write my last post for the blog. You're right--it's weird and unsettling and a bit sad after nearly ten years. Happily, we've forged wonderful, supportive friendships that will endure. Best wishes with your Christmas anthology!

Alison, you must know I wish you all good luck with the Christmas stories. I know you did a fabulous cover for them as well. This is sad, saying good-bye! But I guess we'll all see each other on FB.

Likewise Diane, and thanks for your good wishes.

I guess we'll see a lot of 'goodbye' posts this month. I've also enjoyed being a part of the Roses of Prose blog. I can't wait to read our Christmas stories. Best of luck on your new book.