Lucky me, I've been friended by a small group of paranormal authors who self-publish. Someone creates a storyline, sets up pages on facebook so we can keep in touch, and offers services like cover creation, formatting, and beta reads.

Our current project is "That Old Black Magic: Heart's Desired Mates" series. It is set in a Shifter Community of Stillwater, CA in the Sierra Nevadas. Eight books will comprise the series. Each author retains her rights with royalties paid directly to the author. We promote and support each other.

My contribution involves a Scottish bear-shifter sent to Stillwater after she's been targeted by a drug gang. A man she's dated hid drugs in her home. When she finds them, she turns the cache over to the authorities. She's shot, poisoned, and marked for more attempts on her life. The head of her bear sleuth sends her to America -- a new take on witness protection.

Police detective in the magical community is Mateo Savage. This panther-shifter is attracted and yet put-off by the Scottish bundle of sass. 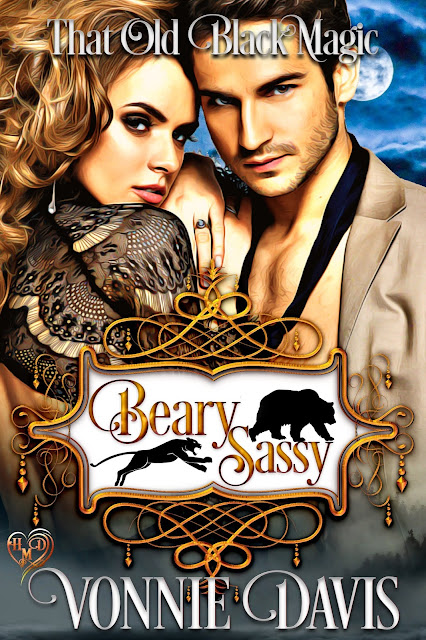 Keep watching. My new book will be available soon! It's in the formatting stages now. it'll be out in eBook and paperback formats. www.vonniedavis.com

'Beary' cool, Vonnie! :-) So glad you found that group--or they found you. Sounds like a great, fun project. I really like the common plot theme running through all the stories. Wishing you all much success with it!

Ahem. What Leah said. That is Beary Cool! Working in a group is always fun. Love your line We promote and support each other. Kinda says it all. Best of luck with your latest.

How ironic that we're all thinking "cool" for a comment on your latest read. My thoughts while I was reading this post was "cool book cover" -- the stares on those characters are very intense. Best wishes with your new release!

Sounds like a fun project and a great group to be part of.

What a great group. Best of luck. It sounds 'beary' good.

Vonnie, how great to have found writers who riff with the magic like you do. I'd never even heard of shape-shifters ten years ago, and clearly, they are a big hit these days. Ride the wave, baby! Happy sales to you!

This sounds like a terrific group for you, Vonnie! Love the cover. I'll keep an eye out for this one!

Wow. That is so cool, Vonnie. Please share on the FB page when it's available.