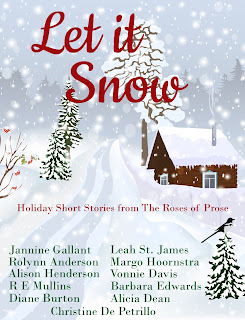 Come back tomorrow for a holiday tale from Rolynn Anderson! Happy Holidays!

So so glad Brooke found Flynn. No wait. It was the other way around, wasn’t it? Nice HEA.

What a lovely story and a very...ah...satisfying ending.

Perfect. A nice warm ending for a holiday tale.

You did us proud as the opening act for the Christmas stories. Thanks for a sweet read, Chris!

What a sweet ending to the story...or the beginning of a great love story. Thanks for kicking off the season with a charming story.

Perfect...sigh....love this story. Great way to kick off our Christmas tales!

I'm with Brooke--he looks and sounds like a great cuddler to me!

Thanks, ladies! I love writing these holiday tales! So much fun!

Such a wonderful beginning to the holiday stories. Will this story continue? I'd love to follow along.

I'm so sorry to be SOOOO late commenting, Chris. Wonderful story! I love the characters, the humor (like the comment about spending Christmas in snowy Vermont--words after my own heart!), and the way you brought it all together in the end. :-)