I’ve talked about my son’s wedding until everyone (I’m sure) is tired of hearing about it. LOL It went off without a hitch last Friday, which is why the lovely and talented Vonnie Davis posted in my place. So here I am in her place, pondering how to combine Lost in America or Rebel Without a Cause with a wedding.

Then it occurred to me that rebels seem to run in my family. Maybe not conscious rebels but rebels nonetheless. My mom went against her parents’ wishes and at nineteen married an army air force man six years older than she. While most girls in my high school class graduated one weekend and got married the next, I went to college (the first in my family), taught elementary school for several years then married. My son is thirty-eight, long past the time his buddies married. He waited a long time for Ms. Right and finally found her. Instead of getting married in a church, they decided to get married on the beach. Now Arizona (where she’s from and where they live) isn’t exactly known for beach weddings. So they went against the custom of marrying in the bride’s hometown and came to ours. 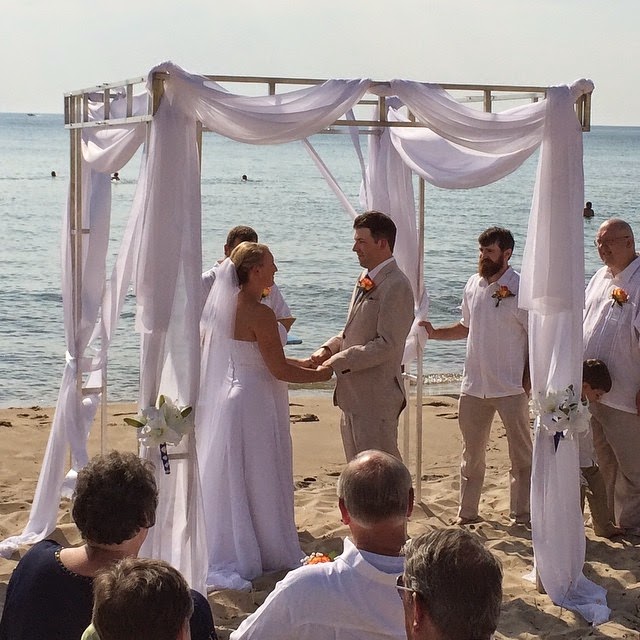 Friday was a gorgeous day. We couldn’t have ordered a better one.  Besides the invited guests, we had about a hundred or so sunbathers who applauded the new bride and groom. As they were leaving, a little girl ran up to them and said she was getting married on the beach just like them.

A little rebellion being spread around?

Email ThisBlogThis!Share to TwitterShare to FacebookShare to Pinterest
Labels: Rebel Without A Cause, weddings

The setting (and they) look beautiful! I got married outside, too. And I did all my own food. Who says traditional is best?

What a fantastic picture. Nothing wrong with changing things up now and then. Congratulations on your new daughter-in-law!

Sounds like a fabulous wedding. Congrats on getting a new DIL.

You did your own food, Jannine? Wow.

Thanks, Margo & Vonnie. I'm so happy for both of them.

Sounds like it was a beautiful wedding and I couldn't imagine a more amazing setting. Best wishes to the happy couple!

Wow, what a beautiful picture. Thank you for sharing. There's something to be said for being a Rebel, right? So happy for your son, and for you that it's over! :)

Beautiful day for a beautiful ceremony, Diane. Congrats to the happy couple and their families.

A fun post! Made me think about my youngest son's wedding to a Hawaiian bride. Only a few family members made the distance for the wedding, so we held a reception for the couple in our home state of VA a couple of weeks later. Married in Hawaii--honeymooned in Virginia! How about that for a reversal?

Thank you for all the lovely comments. It truly was a beautiful wedding, made more beautiful by the gorgeous bride and the handsome (I'm not prejudiced) groom. :)