Rebel Without A Genre By Donna Michaels

Yep, you guessed it. I’m the rebel.


In the writing world, branding is a huge way to get recognized and to gain a following. I should know. It happened to me without even trying. See, I write romaginative fiction, romance mixed with comedy, contemporary, suspense, sci-fi, fantasy, paranormal, adventure, time travel. I love to read variety and write variety. My books range from short to epic, sweet to very hot, and I’ve even written a story in first person. Variety. It is the spice in my writing life.
But something happened almost two years ago. The Wild Rose Press released my contribution to their Honky Tonk Hearts Series, COWBOY-SEXY. 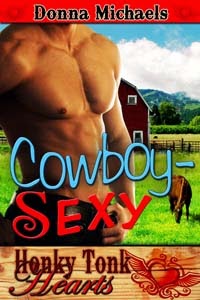 Amazon offered Finn for free for four days. This was all new to all of us. I made up promo, and advertised on Facebook and all social media I could think of, plus I handed out cards to anyone locally who would take one. lol The gals at the annual Vampire Diaries Party ( or as I like to call it-VD Party) were given special promo and, bless them, they all promised to download my free book and tell a friend.
It worked. I had thousands of downloads. Who knew cowboys were so hot?
I do now. Those thousands of free downloads somehow got the book into Amazon emails and I actually sold a good chunk. Good enough to generate a royalty check that could pay for more than lunch. Yeehaw! It also generated fan mail and readers wanting more. This got me thinking. Cowboys sell. I love cowboys. I have more cowboys. I’m going to turn those cowboys in to a series and see if that makes the readers happy. It did, and does. My Harland County Series is an Amazon Best Seller. With four books out so far, I have plans for four more, and I already have another cowboy series talking in my head.
But I told them to simmer down, especially since the contemporary military series I put on hold to wrangle those Harland cowboys was starting to chant really loud. I was getting antsy. Variety. I needed to mix things up or I knew I’d start twitching. Probably develop an eye tick, too. So my cowboy heroes and military heroes starting talking and negotiating. Here’s what they came up with:
They’re sharing custody of me. ☺
I get to write a Harland County spinoff series that ties the National Guardsmen from PA to my Texas cowboys. There will be characters crossing over from both series. In fact, the hero and heroine in cowboy book #3 will be getting married in the first book in the Citizen Soldier Series.
Brilliant. I’m happy. They’re happy. Now, I just hope my readers will be happy. The PA Guardsman aren’t exactly the quintessential cowboys, but they are outdoorsman. They own a resort in the Pocono mountains, so there’s hiking, fishing, boating, white-water rafting, skiing, horseback riding. Those men are no slackers. And they have great bodies to prove it. They may not wear cowboy boots, but they do wear boots. Combat boots.
As you've probably guessed, even though I write several genres, I’m mostly known for my cowboys. But that’s okay. I love writing them. I’m just not going to write them exclusively. That’s the rebel in me. Guess you could say the rebel made me do it. J
So, if you see me at a convention you’ll find two boots on my table, but they don’t match. One is a cowboy boot and the other is a combat boot. Too bad they didn’t make a suspense boot, or a sci-fi boot, or a paranormal boot…
What are your thoughts on branding and writing? I’d love to hear your input. Especially since my first book in the new series isn’t out until next month. I’ve no idea if it’ll bomb, or if my readers will embrace the change and go with the flow. I sure hope so. I really don’t want to twitch. And that eye tick thing doesn’t sound very fun.

My fourth Harland County book, Her Forever Cowboy is up for Book of the Month over at SSLY!


If you've read Kevin's story and would like to vote, I'd sure appreciate it. Click HERE. Thank you! I'll love you forever and back!
Pssst! Speaking of conventions, I’m in New Orleans right now...TODAY, this very minute! at the Author Reader Con at the Marriott. If you’re in the neighborhood, I hope you’ll stop by for the book fair today, it’s 2pm-6pm. You can’t miss me. Just look for the boots! Visit me anytime at www.donnamichaelsauthor.com
Posted by Donna Michaels at 1:07 AM

I'm like you, Donna! I like mixing it up, and I agree that readers like different things too. But you make a great point about favorite themes. I think you've hit on a winning strategy! On a side note, where in the Poconos? My hubby's from Scranton, and that's where I was married. I have fond memories of a wedding night at the Treadway Inn in Wilkes-Barre. :-)

Good for you, Donna. Why pigeonhole yourself? Readers enjoy a variety. My books always contain suspense and a bit of humor whether they take place here on Earth or in space. :)

What a great story, Donna. I should say stories ;-) you are an inspiration to all of us! Thanks for sharing.

Voted and you're in the lead! Oh, have I mentioned I want to be you when I grow up! I swear it was the cover of Cowboy Sexy that launched you, and great writing that kept the momentum going. I'm still looking for the "launch." I have cowboys and contemporaries and historicals and suspense. My focus is on the suspense going forward, but I could be persuaded back to cowboys for the right price...as in sales! I think you're smart to tie the two series. I bet it'll really help keep those cowboy readers buying the new books. Awesome job, Donna!

My agent would like me to stick to one or two themes to further my brand. I like writing whatever sparks my interest at the moment--contemporary, historical, cowboys, government agents, bear-shifters, firemen, romantic suspense and French historicals set in Paris. Right now I have 2 series going and, like you, hope the readers enjoy them both. It's scary, isn't it? Writing what pleases you at the moment and often what might not please editors or--gasp--readers. Great post.

Did you say TVD party? OMG...LOVE that show! I've been to a few conferences and had a blast! On writing, I agree. I'm a rebel as far as sticking to one genre. I write the stories that come to me. Hopefully, readers will find me wherever I go. :) Congrats on all your success!