Lost in America (Somewhere in Texas) by Alicia Dean

(If you are looking for the lovely Brenda Whiteside, she was kind enough to trade days with me, so I'm posting today in her place. She posted in my place on the 19th)

Leah’s story reminded me of a trip from Hell that I embarked on with some friends right after high school. (We weren’t really lost geographically, but boy, were we lost in every other sense of the word.)
After graduation, I shared a one-bedroom apartment with some girlfriends (at any given time there were 2 to 5 of us living there, and believe me, there are plenty of stories I could tell just about that, but this is about the trip). One of the Roomies—we’ll call her Liz (because that’s her name)—had a mother who lived in Odessa, Texas. As it turns out, country singer Mickey Gilley was appearing in Midland, Texas. My family and I had met and become chummy with Mickey a few years earlier, and when we went to his shows, we always hung out with them on the bus, and at hotels, etc . I thought it would be cool to introduce my friends to him.
So, Liz and I decided that we’d take a trip to see her mother and Mickey Gilley. Liz’s brother, Tom, and his best friend who was also our friend, Terry (who would end up being my husband, now ex-husband, which is, again, a whole ‘nother bunch of stories) decided to go too. They would ride in Terry’s little Chevy S-10 and me, Liz, Robin, and Kathy (I think Kathy went along. My memory sucks, and I can’t remember for sure) would ride in Robin’s car. So, we set out on the nearly 500 mile trip. For part of the drive, we remained in fairly close proximity of Terry and Tom on the highway. However, at some point, we lost contact. In that day, we did not have cell phones so we had no way of reaching them. Not that it mattered all that much, since we were all going to end up at the same place.
Sometime during the wee hours, on a dark, deserted stretch of highway, Robin’s car started making a funny noise (Not funny ‘haha,’ funny ‘concerning’) and in moments, it chugged to a stop and we pulled off on the side of the highway. Here we were, four 18 year old girls in the middle of nowhere in the middle of the night with no phone and a disabled car. At that point, we realized that we did indeed need to stay in close proximity with Terry and Tom, because we were now stranded.
For a period of time (I can’t recall how long, but it seemed like an eternity) we cried and cursed and tried to figure out what to do. (although, if I recall correctly, at some point, Robin settled down to sleep, which infuriated me. How could she sleep at a time like this????) Anyway, hardly any vehicles passed, and the few that did didn’t bother to stop and help. Until, finally, a vehicle’s red taillights glowed and it started backing up and off to where we waited on the side of the road. We were at once elated and frightened. Perhaps help had arrived, or perhaps we would all be raped and murdered. We waited in anticipation/dread for the good Samaritans/psychotic killers to reach us. Then, to our disbelief, we recognized the vehicle and its occupants. Yes, you guessed it, Terry and Tom. I still have no idea how, after all those hours of being separated, they were the ones who found us.  At the time, we didn’t know if they were behind us or ahead of us. Thankfully, they ended up being behind us.  If memory serves, they had stopped somewhere to eat or get gas or something and ended up meeting some random girls and hanging out/partying with them for a bit. We didn’t know whether to kiss them or kill them.
So…the six of us piled into the S-10 and drove the remainder of the way to Odessa/Midland. (Yes, six. Some of us were in the back and it was October and freezing with the wind whipping around us as we sped down the highway.) I don’t remember that much about our stay there, except if I recall, I did get to introduce my friends to Mickey Gilley, only briefly. And, it seems that Robin’s dad ended up coming to get her and the five of us ended up traveling the 500 miles back to OKC in that tiny truck.
We did figure out why Terry and Tom were so far behind us. Terry was known as being somewhat of a tightwad. And, even on a 10 hour drive, each time he stopped for gas, he refused to put more than $5 worth in the tank. I remember at some point screaming at him, “Are you kidding me???? Are you afraid you’re going to DIE before you use up the gas and you would have wasted the money????”
Somehow, we made it back. And, in case you’re wondering, you read the above correctly about Terry ending up being my husband. Yep, I actually married him. (We were together for twelve and a half years and have three amazing kids together and we are still friends, so I would say it was worth it. But, I do have to question my sanity at the time).

Because I don't have a pic from the trip, I thought I'd share this. My ex and my son, Presley, from a few years back on Presley’s prom night: 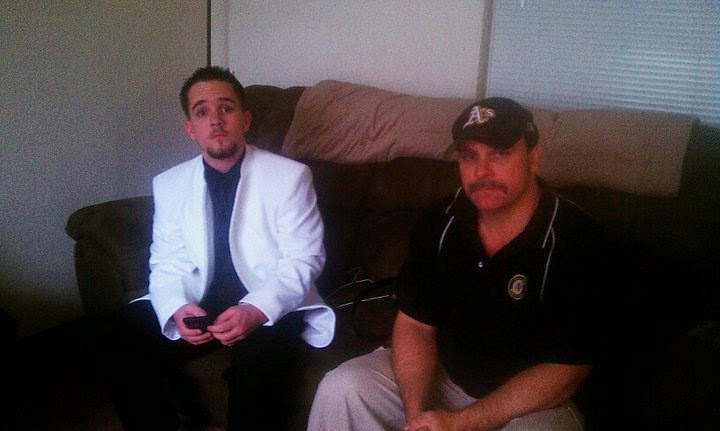 What a memorable trip. Good thing it was your friends and not a psycho killer or you'd never have lived to tell the story. :)

Yes, so true. I wouldn't have lived to tell any of my stories. :)

Fun story to read - probably not so fun to live!

'The good Samaritan/psychotic killers.' Loved the way you wrote that one, Alica. Thanks for the entertainment. Glad you all survived!

No, Alison, it was not fun at the time. Although, actually, once we got there, it was fun. :) You know how resilient young people are. It didn't phase us all that much once we were safe.

LOL, Margo. Thanks! Glad you enjoyed it.

Loved how you told this! I actually traveled cross country with 3 guys once (one was my boyfriend at the time who I didn't marry--I must be smarter than you, Ally. LOL). Anyway, they were riding bikes, and I was the support vehicle. Took us several weeks. The point to this is the "no cell phones" part. We lost one of the guys for a full day. Finally found him sitting by the road in front of an orphanage. Classic, right?

Sounds like the trip from hell--but it ended up OK, if not heavenly. I'm sure most of us have a similar road trip horror story. Thanks for sharing.

Wow. That's some trip! I can picture you screaming at your one-day husband about the gas. :-) My husband does the same thing--he'll only put in x-dollars at a time. I don't get it. He's only running short that much sooner! Argh.

Haha, Jannine. That is classic. I would imagine most of us have some kind of crazy story like that from our younger days. Yes, definitely smarter than me. :) Thing is, he wasn't even my boyfriend at the time, and he actually married one of my friends before he married me. Like I said, there are lots of stories I could tell about that time. :)

Yes, Susan. I imagine so. It's one of those "we'll laugh about this some day" kind of things. :)

LOL, Leah, I bet that does drive you nuts. Yep, they only have to stop more often. And, when you're on a 500 mile road trip, that means it will take that much longer...ugh!

What a great story! Thanks for the early morning chuckles! Well, early to me, anyway.