Pitching My Suspense Novels to Hollywood by Rolynn Anderson

I went to Hollywood and they treated me like a star author!  Yup, I went there for a FREE conference (with 125 other published authors) sponsored by Sisters of Crime.  I paid only for my way to Hollywood (I went by train); I also paid for my three night stay at the Hilton, a most luxurious hotel, with an extraordinary staff.  The food served, three breakfasts and two big lunches, was free and delicious!

We benefited from excellent sessions, led by generous, interesting folk from the industry, and beheld a fascinating big picture of how Hollywood works.  What’s more, I pitched my funeral planner suspense series to an Executive Producer of Lifetime…and did not choke!

Sessions:
How to pitch
How to build great characters through a series
Process from page to screen
Getting past the gatekeepers
Development to green light
Negotiating the sale
Putting it all together: author, screenwriter, director, actor

Producers, agents, managers, actors, an entertainment attorney, and screenwriters spoke to us on all aspects of the business of making movies, features and TV shows.  Our last speaker combined almost all the roles I’ve just mentioned.  Alison Sweeney writes mystery novels now, while she raises two children (husband is a detective), along with producing Murder She Bakes, a series on Lifetime Channel.  She’s also the lead actor in the series and script writer.  All the shows are based on Joanna Fluke’s popular mystery/baking novels.

My Take-Away’s from the three days:

#1 Welcome to Chaos
Hollywood is in turmoil much like the book-publishing industry.  Changes in technology, multi-production companies, often international, and new platforms like Netflix, HBO and Amazon, are changing the look of the industry.  No one is sure what will happen next! (I like this dust-up because we might sneak into the fray, but then, that’s the positive in me J)

#2 Sell lots of books and get lots of reviews
Producers want a book/concept that’s proven to appeal to readers.  They ask for LOTS of books sold, along with many reviews from satisfied readers.  They even want a marketing plan from the author/agent.  Series sell, especially if the hero or heroine continues through the series.

#3 Gatekeepers abound in Hollywood, even more than in the book-publishing industry.  The process is slower and more convoluted than it’s ever been.  You have to have an agent, preferably with Hollywood connections & know-how, before you make deals (and an entertainment attorney watching out for you).  Contract options have money and renewal clauses attached, but the author has no way to know how long or if ever her book will be made into a feature, movie or TV show.  Think two years duration, if you are lucky!

#4 Contacts Matter
You need an advocate!  Your best way in might be to find a producer or manager (young and hungry) who will champion your concept.  Don’t give up on coming in the back door!

#5 No one knows what the next big trend will be
All entities in the business were unsure about what’s next in the biz.  When Reese Witherspoon bought Gone Girl after everyone else rejected it (because the novel was too dark), she changed up the business.  This article on Reese and her production company will help you understand the big change-up in the market...and how a book gets to Hollywood faster, these days: http://www.wsj.com/articles/reese-witherspoons-new-role-power-broker-1460054342

-Producers are hungry for the next big concept.  You could go to them directly and they might be eager to push your idea.

-With Amazon and Netflix and other platforms in the mix, exciting things could happen

-Ask yourself: WHAT SETS MY CHARACTERS AND IDEAS APART?  What am I not seeing-in the industry-that I’d like to see?  What do I have authority on that no one else does? (e.g.  Take a classic and reboot it!)

-READ THE SCRIPTS OF MOVIES YOU LOVE (which are like your books.)  Pick the producers, directors and agents who will push/create stories like yours!

#7 Pitching
For those of us who have pitched our books to agents and publishers, Hollywood is a parallel universe.  Know who you are pitching to and what they are looking for.  Producers and agents in Hollywood want you to tell them the through-line or ‘spine’ of the series you are presenting.  Example:  in Mad Men the spine is “a man who is afraid of being found out that he’s a liar.”  His underlying self-esteem problem tracks throughout the series.

#8 Next steps (if you’re still in!):
-Read the trade journals to find your niche (match your book with a director/producer); sign up with IMDB-Pro…do a month free…join
-Get screenplays of the movies your directors/producers are doing and read them; think of actors to play your characters….approach these people with your project
-Find an advocate/agent
-Increase your sales, reviews, awards; develop a marketing plan 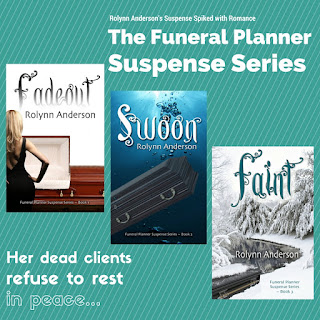 Boutique funeral planners morph into a quirky detective agency, exposing secrets of the dead.  The heroine, with a fainting disorder, has prescient faint dreams; the hero is a muck-raking journalist.  Add: blind forensic investigator, embalmer, retired Army general, and a service dog.

Wow! Not only did you get an education, but sounds like you had lots of fun, too. Thanks for the post.

Funny story: one of the clerks at the Hilton Hotel where the conference took place, looked at our ‘Sisters in Crime’ title, and thought we were all criminals who’d done time and were getting together after leaving prison :-)

As always, it's the people we meet and the contacts we make at these conferences that make a difference. For instance one friend I made designs gorgeous book covers. I'm going to have her craft my cover for Cezanne's Ghost!

Sounds like getting the nod from Hollywood is a long, convoluted process. I guess I'll focus on #2 (sell lots of books) for now before I start casting my books... Very informative post, Rolynn!

What a great conference ! SIC does so much for their members - a fabulous organization.

I don't have cable, so watch TV shows on DVD long after the season has ended. If your funeral planner books get picked up, that practice might have to change! Best wishes -

Excellent post. I was going to write one, but I couldn't improve on this one. Loved meeting you, Rolynn.

Very enlightening, Rolynn. Looks like things have changed immensely since I had a personal correspondence back in the 70s (yes, I am that old) with Fred Zimmerman (High Noon, From Here to Eternity, Oklahoma, A Man for All Seasons, and so on....) when I pitched an idea to him from a book I was working on and he responded!!

My guess is that we all think OUR books are the ones perfect for movies. (I KNOW my Southern Gothic series would make a fab movie!) That said, I find the protocol necessary for success you blog about to be daunting, to say the least. Sigh. Thanks for enlightening me and probably a whole lot of other naive authors.

What a great conference! The process of selling to Hollywood is so much like selling to New York, yet so different in many ways. As much as I'd love to see my female bodyguard series made into a movie or TV show, I'm stuck at the "Sell More Books" stage. Better concentrate on that first. However, your funeral planner series is different enough to catch the eye of an agent or producer. Good luck!

Great post, Rolynn. As Susan said in the previous comment, we all think our books would be perfect for the movies. But I'm not up for the time, nor the stress the process would require to even get a look-see from an interested party. I'll just keep writing, trying to get better.

Rolynn, great post. I'm not ready for that stage of my career, but sounds like you had lots of fun. I have a paranormal romantic suspense that I would love to see as a movie. Maybe some day!!

Hi Rolynn. Great Post. In the post I did of our trip to Hollywood, I mentioned the misperception of the hotel receptionist who thought we were an organization of "sister" survivors of crime. And locally, the police who've come to our meetings had the perception we were reformed prostitutes. Go figure.

I'm glad I could help suss out the truths about getting our books on film/TV.

Cora, I love hearing all three misconceptions which may not be as farfetched as women of a certain age loving to write about murders :-). So we could have been prostitutes, survivors of crime, and/or former criminals. All of them present some fun fiction stories!

Jill, don't give up...keep that romantic suspense in mind!

Vonnie, you have the right idea. One of your books will hit the big numbers and then you'll have a chance!

Alison, thanks for prodding me with the funeral planner series...that's what I pitched. Will work more with a couple contacts. I think your female bodyguard is high concept. Go for it!

Susan, I was daunted, I have to tell you. But I like to know the process/framework/gatekeepers. Being naive doesn't help us, as you wisely point out.

Andi, yay! It's something to say...we pitched to Hollywood!

Polly, great meeting you, too! Thanks for your enthusiasm in the face of daunting odds.

Ashantay, you know how to put a smile on my face...and push me to get the funeral planner series on TV!

Rolynn, That conference sounds like one fabulous experience. Convoluted or not, the process is like any other. Believe in yourself and your 'stuff' and persuade others to believe too. Uh, for right now, I'd be happy for a publisher excited about my latest wip and readers who enjoy the books I already have out there.

Margo, I needed to hear a practical approach. I tend to be scattershot about opportunities...and I'm not the type to gamble or play the lottery, knowing the pitiful chances I have. But I got to go to this conference, and entertainment attorney I know (retired) pushed me to pitch, Reese Witherspoon gives me hope, AND many are charmed by the funeral planner series. My head was turned!

Great Blog, thank you so much for sharing. I love Alison Sweeney, she's a real inspiration. Of course, I'm a geek and have watched her since she was a teenager on Days. She's worked very hard. I am picking up her new book "Opportunity Knocks".

Mary, I'm so impressed by Alison Sweeney! What a dynamo...she's a model to us all! So glad you liked my post!

OH wow, how exciting!! So thrilled for you. Thanks for the tips!

What a time you had. Thanks for sharing.

Diane, thanks for your shout out...that my books are strong material for movies. Now that I see the kinds of shows the Lifetime audience likes, I think yours could fit into that 'small town mystery' niche! We can always hope...plus do some pitching!