I'm a proud owner of a Kindle so, no, I'm not enamored of the smell and feel of books. Having packed thirty-one boxes of books to move from one state to another kind of ended my love affair with short and heavy tomes. Not to say Calvin and I are book hoarders, but we still had books from college and those we read at bedtime to the kids. Yeah, it was time for me to switch to something lighter.

So when I shop online for eBooks, I read reviews. I notice the number of reviews, but it's not a deal breaker. I read three of the top reviews and two of the lower ones and make my decision to click or not click.

Reviews can make or break a writer's sales.

Or so we tell ourselves.

I've been blessed with many good reviews ... and not so blessed by bad. Some of them I deserved and learned from. A well-written bad review can spur a writer to do better next time. After all, I'm not a perfect writer. Weaknesses abound. I mean, I'd like to think I'm like Mic Jagger, getting better with age but, sadly, I'm not.

I do have a tendency to end the book on a sudden note. As a reader, I like a quick start, a quick ending, and I don't need my hand held with a bridge from one scene to another. But that's me. As a writer, I have to consider my readers and give them the long drawn out, emotion-filled ending they seem to want. If I don't, I'll get reviews like "That's it? Really? After this romance you want to end it on a dime? Really? You ruined this book for me!"

Then there was the reader who claimed I'd made my heroine weepy. "She cried sixty-five times." What did the reader do? Keep a tally? Even I would have noticed sixty-five crying spells. I had a review of another book where the reader said, "I can't stand stories where infertility is magically healed." What? Never once did I say the heroine could not have children. She'd lost two babies because of an abusive husband who beat her.

I dislike it when a reader attacks the author instead of the book. I've been called dumb, uneducated, untalented, too lazy to do research (oh, if only she could see my research files), over-sexed *cough* ... okay, we'll gloss over that one.

My editor was thrilled there were three-hundred and fifty requests for BEARING IT ALL through NetGalley before its release. She actually believed I'd get that number of reviews. The first two that came in were two-stars. Ouch. Sales skidded.

Several said I stretched the bounds of believability--it was a paranormal, y'all. Bear-shifters done my way. Did I get three-hundred and fifty reviews? No. Three-hundred? I wish. Two-hundred? Can a grown woman cry here? Last week, the book just got it's sixtieth review. I nearly dropped to my knees in gratitude.

Free reads does not guarantee happy readers. It seems to bring out their snarky side. Do I review every book I read? Only if I can leave a good to average one. I know the effort that goes into writing a book. It's not in my nature to bash another writer. If a book was a "did not finish" for me, I'm not reviewing it--and I do this for two reasons. I don't want to hurt another person's feelings and it can be career suicide for me to leave a bad review for another. The writer's posse or fan club may gang up on me and leave a bazillion one-star reviews. While it doesn't seem fair we can be battered in reviews, but cannot express our true feelings without fear of reprisal, it is becoming more and more the nature of the business. And that saddens me. 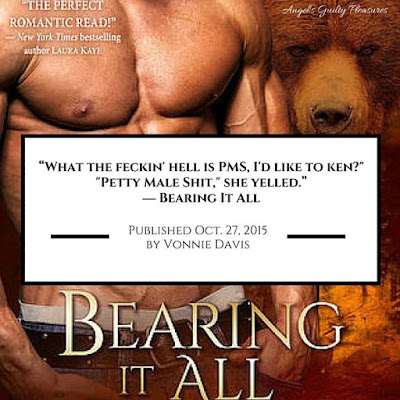 THE SIXTY REVIEW WONDER
http://amzn.com/B00TCI2A5E﻿
Posted by Vonnie Davis ~ Romance Author at 12:00 AM

I was reading a manuscript for someone once and actually DID count how many times the heroine cried--because she did it a lot--but I've never done it when reading a book. :-) I had the same thing with infertility, though, on my first book. The heroine had miscarried, which had nothing to do with being able to get pregnant. That was the first time a well-published writer (thank you to whomever it was!) told me no good ever came of arguing with the reviewer, so I didn't.

I always love your posts.

We're told to write the books of our heart. Authors at the Left Coast Crime conference I just attended exhorted us not to read reviews and soldier on to write our books the way we want to. Yet that Amazon elephant, counting reviews and sorting them by how much over 4.0 we rate, makes it impossible not to notice how reviews are helping or hindering our sales. My Amazon Encore book (with 64 reviews) sells big time when Amazon gets around to touting the book...and I don't even know when/how they're pushing it. We can't help but cater to this most powerful element in our writing careers. Heavy sigh.

Thank you, Liz. Yes, never argue with a reviewer even if you wonder if it's your book they're talking about. LOL I did see a writer (not too mature, I'm thinking) post on Facebook "Who the f#$% does this person think she is?" and then left the link to her review. Well, nosy me went to the review, read it, and understood why the author was upset. It was a nasty one. But not as nasty as the comments left by the author's posse. E-Gads!!! They tore that poor lady apart. Yowza!

More and more authors are preaching that sermon, Rolynn. DON'T READ YOUR REVIEWS! But we all love the lift, the ego boost of an appreciative one. It's almost like telling a musician to leave the venue before the applause starts. I'm eager to hear about your conference.

I'm like you, Vonnie. I read reviews, both good and bad, to get a sense of the book and why people do or don't like it. Sometimes what one person dislikes is exactly what I do like! And I think 60 reviews is pretty darn good...despite the overall ratio! The fact that 300-something people wanted to read the book is pretty impressive as well. :-)

I would love to get 60 reviews on Amazon! I can't seem to break the 30 mark while I have over a hundred on Goodreads. All those NetGalley readers put their review up on Goodreads then seem to forget to go back and review on Amazon once the book publishes. Irritating! I can't help reading my reviews--even the bad ones. Like the car accident on the freeway, you don't want to look, but you do anyway... Great post!

Thanks, Leah. I read the painful ones to learn. If three or more complain about the same thing, then I know I have a problem I need to correct in my next book--like how often my heroine cries.

I so seldom go to Goodreads. I'll go if a writer friend needs a vote on a list she or he is in. And I do try to remember to post my reviews there, too. But I rarely check my reviews on that site. It's so caustic. It makes me nervous to even go there. And, yes, I know that's silly, but this is me you're dealing with. LOL

What everyone else has said is so true. I've been blessed with more good reviews than bad and had one 'experience' with a troll. The review began "I never even read this book but feel qualified to review it." Wait! What? I once had 12K downloads when my publisher offered my book for free. Sure didn't get near that many reviews. Sixty on Amazon? That would be a dream come true for me.

I always read my reviews. I'd love to say they don't matter to me, but they do. I've been lucky and have never received a truly bad review, even on Goodreads. I did get a couple of one-star ratings for my collection of Christmas short stories, one from a woman who said she couldn't get through it. Out of curiosity, I checked out her GR profile, hoping for some insight. Her favorites were all complex, dark paranormals. No wonder she didn't like my warm, fuzzy, little romances. I do wonder, however, why she picked it up just because it was free. And why go to the trouble to write a review? All we can conclude is that people are strange.

Oh, Vonnie, do I hear your pain! Like you, if I can't say something good, I don't say it at all. What bothers me most about the bad reviews is the snarkiness; if they said something constructive, hallelujah! I'd learn. But alas and alack, it's mostly sarcasm. And then there's one that said "I can't review this book because it didn't download properly'--yet saw fit to give me one star. Like it's my fault?

She didn't read the book, but felt qualified to review? Oh, Margo, that's like me saying I faint at the sight of blood, but feel qualified to operate on you. Can we spell idiot??? I guess people just want to be heard. Or want to stand on top of someone's back to feel taller. They have no clue how idiotic they sound.

Alison, I often wonder that, too. Does FREE mean you scarf up a book even if it's not the type or genre you enjoy? I don't care for memoirs. I don't care how many free ones you offer me, I'm not taking one. Reading something I don't like is a waste of my time. I did enough of that in college. Yes, people are strange.

Oh my, Andi. An improper download is not your fault. I got a bad review because my publisher does not indent the first paragraph of a chapter or pov change. An author has no control over a publishing house's styles. Get real, people!!! Not a word about the storyline or my use of craft...just complained about the lack of first paragraph indentation. ACK!

Great post, Vonnie. Reviews can be killers, for sure. I don't mind bad reviews at all, oddly, as long as they're not totally untrue. Different opinions make the world go around and I'm just glad people are reading me. But yes, the ones that are insulting, a personal attack on the author, are uncalled for. Good luck with sales...you know you're an awesome writer, regardless of those snide reviewers!

Hugs, Vonnie. I'd love to get sixty reviews. Am I jealous? Hell, yes. LOL Whenever I read an endorsement of a new book, I always check the reviews & read the sample. Plus, I try to write reviews for books I've thoroughly enjoyed. I miss my old readers book group where we share what we've been reading.