I recently returned from a 3-generation family vacation. First, let me tell you about some of our vacations when my kids were younger. They called them “encyclopedia” vacations. When we went to a famous site, I wanted them to know about it. (You can take the teacher out of the classroom…) As they got older, I gave them the Triple A book, and had them choose places to stop—which meant they had to read about these places.

Our last family vacation with just the four of us strained Hubs’ and my patience. A 10th grader who PMS’d the whole time and didn’t want to do anything, and a 9th grader who wanted to be home with his friends. Later—many years later—he said that was a really great vacation. The kicker, though, was daughter, who had groused the whole time, got on the phone with her girlfriend (while we were emptying the car) and exclaimed about how she had so much fun. I thought Hubs’ would kill her. LOL

The kids are grown with kids of their own. We went on a cruise with daughter, SIL, and their two kids, along with SIL’s parents and his sister and her son. Not just any cruise but a Disney cruise. What fun. Especially because this was a Star Wars Disney cruise. I might have mentioned a few times that my family are Star Wars’ fanatics—from the 6 y.o. through Hubs. One day during the cruise, Star Wars characters walked the decks, had photo ops, while those into Star Wars more than my family also dressed in costume. I have to admit, Hubs’ and I hung out with some of the characters. 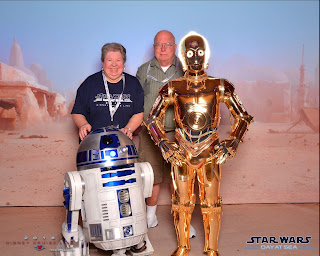 Before leaving on the cruise, I had a brilliant idea. I would set the fourth Alex O’Hara book on a cruise. So I paid special interest in things I could use in the story. I also asked our tax preparer what I needed to do to be able to take my cost of the cruise as a business expense. She asked her supervisors. I didn’t get the not-so-good news until we got home. Nope. Can’t do it. Darn!

We had a great time (even if I can’t write it off). The kiddies had their activities. The younger adults had theirs. And Hubs and I did our thing. We all met for dinner each night and had fun discussing what we did. I have to say Disney does customer service well. The food was to die for and the staff couldn’t have been nicer and friendlier. I would definitely recommend a cruise for a multi-generation family vacation.

Diane Burton writes romantic suspense, mysteries, and science fiction romance. She blogs here on the 30th of the month and on her own blog on Mondays.

Sounds like a great time...even if you can't write it off!

Looks like you had tons of fun and created great memories.

I could never get Calvin on a boat. Not happening. I went on a cruise once and enjoyed it, even if my luggage never arrived...long story. I'm thrilled your trip went so well. Sounds like a cruise everyone could enjoy.

Laughing with Vonnie...I always thought the cool thing about going port to port on a cruise was you didn't have to haul luggage from one hotel to the next. Going without luggage altogether...now that's an odd approach. Glad you and hubs had a good time...and the kids were able to find their own fun! Excellent structure to that vacation!

Two that kind of cruise is up on top of my to do list. I'm priming the kids about it now. And only Vonnie could take a cruise with no luggage. Glad you had a good time. Since we're rooming together this week end, I want details on that book idea!

How fun, Diane! I love family vacations but haven't taken one since my kids were adolescents. We were lucky enough to meet up at Disney World with friends, so the older kids went off by themselves and we met up as a family for dinner.

Margo & I were at our annual writers' retreat this weekend--hence my lack of response to comments. I promise to brainstorm that story idea with you, Margo.

Leah, I loved the fact that we could each go our own way and not have to do what the others were doing if we didn't want to. I wish we'd gone on one of the shore adventures. Watching the kiddies with the dolphins would have been fun.

I have never been on a cruise, but I would love to go. My dream is to take an Alaskan cruise. Hmmm, I would think you could write off part of your trip, since you were doing research...sucks, huh?