I was with a group of writers last week who bemoaned their lack of New York Times best seller status. All had talent, some more than others. None were willing to invest enough time to promote their books. Forget promoting other writers' books. If they didn't see an immediate return on their investment, like sharing a FB post or retweeting for another author, they couldn't be bothered. 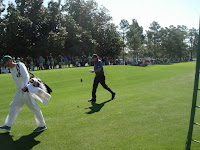 I was struck anew how like writers some golfers are. Yes, I said golfers. Earlier this month, my husband and I were lucky enough to go to The Masters. All the great, once great and upcoming golfers who'd qualified were there. So, there we were, sitting in a grandstand, when a foursome came up. Mind you, this was Tuesday, a practice day, when golfers are more interesting in getting used to the course than anything else. In this foursome were Phil Mickelson, Dustin Johnson and two younger golfers I didn't recognize. Phil hit his drive offline into the pine straw. His path to the green lay up and over a tall pine. He studied the ball, its lie, his clubs. He selected a club and lofted the ball onto the green a few feet from the hole. Again, mind you, he couldn't see the green, and he knew what he had to do to get there.

Dustin Johnson walked up, marked his ball on the green and looked up at the tree and Phil's ball. Phil stepped onto the green and shrugged. For him, it was all in a day's work. For Dustin, it was, "How the heck did you make the shot?" Phil held court for a few minutes teaching the other golfers how he made the shot. This may have been a practice round, but these four guys were playing for money. More important, they were playing for fun.

What this has to do with writing is simple: some writers write for the love of the craft, others write in hopes or anticipation of large payoffs. We all want people to read our books. We also are happy when readers buy our books.

I don't know what it would be like to be a best selling author. I'd like to think it would spur me on to write better, to put out another book, to continue to study the craft. I'd hope to be more like Phil Mickelson, who is beyond the peak of his game, who still plays and who gives the crowds what they want: him. We love a golfer who is gracious and shows he's having a ripping good time at what he's doing.

I love a writer who puts out another book, a better book, after one bombs. Those 1-star reviews are spirit-crushers, but writers I respect learn from them. The next book is often better.

What do you think? Would you quit if your books didn't sell? Or would you go back to basics and revisit the craft?

Betsy Ashton is the author of Mad Max, Unintended Consequences, and Uncharted Territory, A Mad Max Mystery, now available at Amazon and Barnes and Noble. Please follow me on my website, on Twitter, Facebook and Goodreads.
Posted by Betsy Ashton at 7:34 AM

I would never quit, although I would moan and threaten to every day of my life. But mostly (since I'm into the old-girl status) I want to be like Phil. Great post, Betsy.

I am sometimes asked, "Is it easier to write the second book?" My answer is a resounding, "No. It is harder." My own expectations go up with each published novel. I know I can work harder and write better. Sadly, my golf game sucks. Oh well. What's important, anyway?

Liz, I want to be like Phil too. He has the right attitude.

Sue, I suck at golf too, but I'd rather play poorly than not at all. And yes, the second book is harder, because we learn our craft with every page and word. I push my expectations to write better with each manuscript. Sometimes I write better, sometimes my brain is all thumbs.

I don't play golf, but it's the only televised sport I actually enjoy watching. And I've always liked following Phil. Great to know he's a good guy. I certainly wish I made more money writing. I keep hoping that if I plug away at promo and turn out a quality product, at some point my books will earn wider notice. I honestly don't worry about the next book. I know with each book I write, I hone my craft and improve my skill. And unlike those golfers, my brain isn't going to give out on me in middle age the way the body tends to--at least I hope it won't! I think the creativity we put into our writing keeps us sharper than your average tack. Sounds like you got a lot out of your weekend at the Masters, Betsy. Thanks for sharing with us!

Oh, you were so lucky to go to the Masters, Betsy! I'm an inveterate golfer and I love to compete in the sport. I'm always comparing writing to golf. Stay in the shot with confidence...stay in the book with confidence. Writing and golf are both head games...you get better as you play both. I may not hit them farther, but I'm growing consistent at hitting the middle of the fairway and making good choices with my clubs. Same with plotting and character development. My new knees help; my new big screen monitor helps with the writing. I hope I'm a Phil, helping the younger ones. We are in this together in so many ways...I believe part of our legacy is to pass on our knowledge to others, exponentially improving the art as well as the business.

Excellent post. Thanks for the reminder. Although I'm not a golfer, I do see the connection. Just the other day I asked myself if I write for the money or for the sake of writing. Although major sales would be nice, I'm in it no matter what.

Great post, Betsy. And how cool to be at the Masters! (Unlike Jannine, golf is one of a few sports I can't stand watching on TV, but I do really enjoy watching in person.) Anyway, I haven't made any real money yet at writing and I'm still doing it, so I suppose I'll keep on trying! :-) I don't want to be Phil Mickelson famous (or rich), but it would be nice to be able to write full time.

Odd that the group of writers at your seminar had such a close-minded approach on promotion. While writing is a somewhat solidary endeavor, most of us still have a small circle of trusted writers we consult when dealing with a problematic scene. But the promotional end of things is far, far from solitary. I know by promoting other authors--facebook posts, tweeting, visiting their blogs when I have the time, supporting a Thunderclap campaign, or attending their facebook release parties, I am paying forward what was so freely given to me. It was other writers who bought my first book and reviewed it. Storm's Interlude won the HOLT Medallion for best contemporary romance and also for best book written by a Virginia author. Yet, it barely sold over 300 copies. I had no name recognition. No following. Now, five years later, I'm still trying to build name recognition. My editor at Random House is doing her first edit of my 17th book. She's calling me next week to discuss what she wants me to write in my next series. Am I making gobs of money? More than I did, but not enough to pay my grandson's tuition at MIT. I'm in it because now that I've started, I cannot NOT be writing something...how's that for a double negative?

My first reaction to those writers was how appalling. I have found so many wonderful, giving authors. Ladies who willingly encourage, support, advise, help each other. "What's in it for me?" isn't part of their vocabulary. Sure, we have to protect our writing time, but what goes around comes around. Perhaps that's why those ladies aren't on best-seller lists. I'm not a golf fan, so I only know Phil Mickelson from the TV commercials about his illness. It's great to know he is a nice guy.

I love this post, Betsy, and these comments. I never thought of comparing writing to golf, (I used to play, boy do I miss it!), but you made some excellent points. To answer, no, I would not quit writing, even if I never made a penny. The stories come to me, and I have to write them down. As far as promo, I also love spreading the word for other authors, I love the interaction and support and bond and camaraderie among the authors I know. I won't quite writing OR promoting... (But, obviously, I AM rather late to check out and comment on my author friends' blogs...sorry about that!)