As noted in my last post here on the 11th, I’m a pantser not a plotter. I write my books on a wing and a prayer. Open them with a character on the way to some place, or in conversation with someone, and go from there.


I don’t write in any particular order either. Take the book I’m working on now. The one I just yesterday completed - the first draft of anyway. (Short time out here for a brief happy dance!) I knew exactly how that story ended a while ago because I took time out of writing the middle to finish the last couple of chapters. Then all I had to do was go back and write the other chapters just ahead of those last ones in order to believably get my characters to that already established THE END.

Except, I wasn't always like this.
At one time I was a plotter. Plotting my books from beginning to end was how I wrote my first book. Well, HONORABLE INTENTIONS, my first book to be contracted and published, that is. 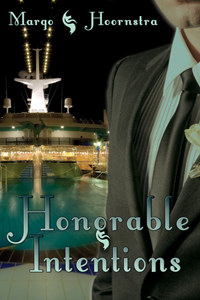 We won’t even mention the six, or was it eight, books I wrote that never did sell…yet. But back to my point. To be honest, you could say the events in HONORABLE INTENTIONS were plotted out for me. 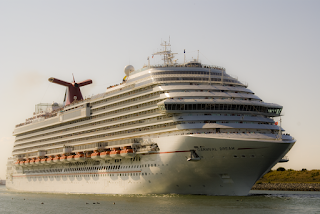 
Samantha is a retired policewoman who is serving as the chaperone and roommate on the trip to the single dad Chase’s impressionable and slightly rebellious teenaged daughter. He finagles his way into the adjoining room, which made for a moonlit, romantic encounter on their connected balconies.


The peaceful Alaskan night was a welcome contrast to the turmoil of her thoughts. Soothing waves whispered against the ship’s hull, a mild reverberation in the stillness. Strands of multi-colored lights, strung stem to stern on the decks above her, reflected in shining ripples on the smooth surface of the water. Beyond that faint light, a blue black haze hid any landscape they might be passing.


Elbows rested on the short railing, she allowed the surrounding darkness to bring her into the comfort of its folds, until thoughts of where she was going and who was along started up again. Serenity vanished, and she lifted her eyes skyward, huffing out a sigh of annoyance. The restless toss of her head from one side to the other did little to dispel her irritation, then a movement to her left caught, then held, her total awareness.


Too late she discovered Chase was out there too. Reclined in a deck chair, feet propped up on the railing with a blanket across his lap, he looked to be asleep. As far as she knew, she hadn’t bothered him…yet. Not wanting to disturb him now, for his sake as well as for hers, she turned to go inside.


The softly spoken words stopped her progress and stilled her heart. She glanced toward the avenue of her escape, the room she shared with his daughter. Their ship’s light cast a muted shadow on the girl’s peacefully sleeping form. Torn between her two options—retreat to the safety of that room, or do as he asked and remain out here with him—she hadn’t been able to budge to do either.


In the end, he made the choice for her as he set the blanket aside and walked over to stand beside her. “Please.”


“I didn’t want to wake Lisa.” She spoke as if she owed him an explanation for being out there. “I couldn’t sleep.”


Tufts of sea chilled air blew upward in response to the ship’s movement, yet his closeness, not the cool night breeze, caught her in a shiver. Saying nothing, he retrieved the blanket and settled it around her shoulders. She snuggled into the plush material which still held his warmth, and his scent.


“I owe you an apology for…my actions our first day on board.”


She looked at him, not sure what her response should be, but he went on before she had a chance to form a thought.


“I should never have kissed you. I regret that.” He studied her for a second then averted his gaze.


“That’s okay,” she managed, a little sad he could be sorry for a kiss which had come to mean so very much to her.


“We sort of got off on the wrong foot.”


She turned to lean her back on the railing. “It’s been a long week.”


They both laughed and the simple, companionable sound echoed like a peace offering between them before silence descended.


Chase’s voice broke into the night. “There must be a way to make this easier.”


“I’m sure we’ll find it.” Her words rode a delicate mist that rose up to touch his cheek. 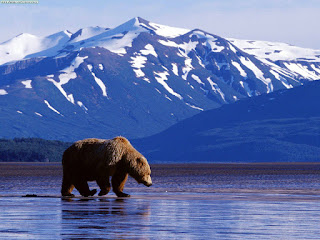 Captivating excerpt. I need to check this book out.

Lovely excerpt, Margo. Lots of mystery in this relationship; wonderful use of senses. Thanks. Plotter or pantser, you've got the touch!

Great to hear. Enjoy! Thanks for stopping.

A www, Rolynn. You are so nice. Thank you.

First...did you take the bear photo? Amazing! Second, I think plotting is easier when the story has an obvious physical journey to follow--like your cruise. I discovered that while writing Wilde One. When I knew they had to go from point A to point B to point C etc. on their treasure hunt, everything flowed right along. As soon as that part of the book ended, I stalled for a while as I tried to figure out the final third of the plot. I swear that's one reason I'm tempted to go back and write the wagon train story I started a million years ago. Simply because the physical journey is mapped out all nice and tidy for me!

Ditto Jannine'S comment on the photo! I tend to think in a more linear fashion so write that way as well, whether I'm plotting or pantsing. :-) It would drive me crazy to jump around the plot, and I'm awed by people whoSe minds can work that way. Loved the excerpt!

I'm beginning to think each book I write requires a different process and I had better be flexible enough to bend to the story's will. Great post. And loved the excerpt. Love. It.

I went on a cruise long ago, before marriage and kids. Never thought about setting a book there, though it makes sense - there's a definite time line there. Love the excerpt!

I wish on the picture, Jannine. No. It's a stock photo I found. We did go whale watching on the trip. That was amazing! A relatively small boat. Up close and personal. NEXT time we go we are definitely spending more time on land. You have my editing fingers twitching with the wagon train story. I say go for it! Make it suspense! Oooohhhh. Can't wait! LOL

Leah- Most times I wish I could write linear. Really I do. I'm just not wired that way. Glad you liked the excerpt. Actually this was a fun book to write. Sadly no, not my picture of the bear. Someday!

Thanks, Vonnie. I know what you mean about bending-although not breaking-to a story's will. Happens to me a lot. Pleased you loved (blushing) my excerpt.

Thanks, Patty! I'd do another cruise in s heartbeat. It does provide kind of a self made plot line.

Just got back from a cruise and have a story for it. The Alaskan cruise has to wait another year, though. Like Leah, I too linear to jump around in a story. Plotter or pantser, whatever works.

We're going to plan a cruise like you took, Diane. Can't wait to hear your story idea.

I enjoyed both the thoughts about plotting and your excerpt. I'm a bit of a hybrid, but more often I'm writing pantser than plotter. I agree that each story takes a different tack. Thanks for the post!

Margo, as a fellow pantser who's also done the Alaskan cruise (albeit on a much smaller ship) I look forward to reading your book!

Sounds like a captivating book. Loved the excerpt! I don't see how pantsers do it. I must have a road map to follow of where my story is going, or I would sit in front of the computer completely stumped. Isn't it funny how we all have these different processes? OMG, I would love to go on an Alaskan cruise some day. Or, any cruise for that matter. :)