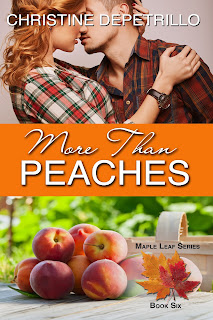 Grady O’Donnell serves drinks to all who roam into his bar, The Clumsy Grasshopper. His heart had once been filled to the rim with love back home in Ireland, but the Universe shattered that bottle. He’s started over in busy Boston, and he’s happy to mix his business, his painting, and his lazy beagle, Cricket, into a life he can easily swallow. Most of the time.

Lena Clover brightens people’s days in Boston with her natural wares at Clover’s Fruit and Flower Shoppe. She’s been so involved in running her farm and store that she’s let her love life seriously wilt. The only love she gives out is to her silly dog, Snowy. Her business partner wants to help her cultivate that part of her life, but after her last relationship, she’s still not ready to stop and smell the roses with anyone.

Until she meets Grady.

Brought together to work on wedding arrangements for Rachel and Harris, their mutual friends, Grady and Lena have to face the fact that maybe, just maybe, there is a little room to explore the instant attraction blooming between them.

If their plans don’t get weedwhacked, that is.

I have loved sharing this series with readers. This last book may say goodbye to some characters that have become friends to me (and hopefully you too), but not to worry. I have a new cast of characters coming your way in The Shielded Series, a set of tales that take place in Boston, 2025. Genius doctors, badass female cops, missing military brothers, and genetically-engineered castoffs fill the pages of this series which has a sci-fi edge, plenty of hot relationships, and a save-the-world flair that will make you believe true heroes do exist.

And before anyone panics, this series makes stops in Vermont too! For some reason, I just can’t stay away from the woods. They are just full of too many possibilities for story ideas.

I hope you’ll join me on the journey this new series has to offer. I plan to release the first book later this year.

In the meantime, enjoy More Than Peaches and let me know what you think.

Preorder More Than Peaches HERE so it will magically appear on your e-reader on April 29th. Love grows in the woods!

Let the ideas flow, Chris! Best of luck with your latest, which sounds like one fine read.

I adore books in a series where I can learn more about and revisit characters. Saying goodbye at the end of a single book is hard, but with a series you know you'll hear how they're doing farther down the road. I loved your book's blurb. Good luck!

Good luck with Peaches! Sounds like you have an exciting new series to write. Always fun to sculpt those new ideas into something great!

Sounds like a great series, Chris. Best of luck. Gosh, I wish I could write about the future...I haven't even figured out what the present entails! Maybe after the election in November, I'll be able to understand the people who live in my world. Crossing fingers.

Good luck with the latest, Chris! I love the cover.

I hate leaving a series, those wonderful characters hang on. Best wishes on this book, Christine.