What Does A NASCAR Driver, Army Ranger, and National Guardsman Have In Common? by Donna Michaels

Hello, it’s Donna Michaels, and as you can see, my head is full of heroes! Okay, my head is always full of heroes, but this is just one crazy instance where all three of these heroes’ books will be released inside of one month, and their commonality is probably not what you’d expect.

These releases all deal with veteran suicide.

A tough subject, but veteran suicide is real, and an epidemic, and part of life. A part I wish we could help, but maybe by acknowledging it and talking about it, we can help make some sort of a difference. They say knowledge is power. Let’s put that power to good use. My husband’s unit has had two suicides in the past four years, so it does hit home for me. I ate with these men and their families, and I’ll be honest with you, I’m still in shock. It’s taken me over a year since the last one, but I felt I was now at a place where I could include the subject in my stories.

Two of these releases are part of my Citizen Soldier Series. The heroes are both hurting over the suicide of a National Guardsman that has taken place in the background of the first five books. Greg was the cousin to one of the heroes, Matthew, and he was best friends with the other hero, Keiffer, who is also the one to find the body.

Let me introduce you to these men. First is my NASCAR driver, Matthew “Stone” Bennett, in WINE AND HOT SHOES. Before writing this story, I didn’t know that much about NASCAR, other than I knew one of the books in my Citizen Soldier Series would have a driver as a hero, since the series is set in the Poconos of PA and fairly close to the Pocono Raceway. One of the things I love most about this book is that it’s the heroine who is in the National Guard.

While researching NASCAR and stock car racing, I discovered a few fun facts, including this one that helped me title the book:

Hot Shoe:  1. Driver who has the most past wins among active drivers at a particular track; is the quickest in qualifying, and is favored to win at that track. 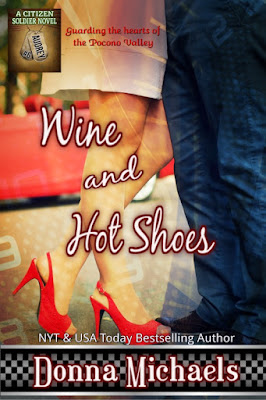 This Thanksgiving, Sgt. Audrey McNeil Watson is thankful for wine. Lots and lots of wine. And her closet of hot shoes. Together, they help her deal with the return of her sexy ex-boyfriend, the now famous NASCAR Champion she left after 9/11 to join the National Guard and make a difference. Too bad he still manages to accelerate her pulse and drive her crazy.

Professional stock car racing driver, Matthew “Stone” Bennett returned home to meet with the Wyne brothers to discuss a recent encounter with their estranged brother Keiffer, to face the reality of his cousin’s suicide, and for the wedding of his buddy, Ethan Wyne.

Volunteering to draw the paparazzi away from the happy couple, he and Audrey agree to spend time together with purely platonic intentions. But he soon discovers their old flame never died, as well as old hurts and resentments. Matthew must face the pain of his past in order to sort out his future.

**I just want to note that all of my books, no matter what series they are in, are all written as standalones. You do not need to read any of the others to enjoy the stories.**

Now on to Keiffer Wyne. This hero is by far my most talked about. I’ve been getting emails from readers for almost two years now. They want the poor guy to have his HEA, and I’m so thrilled to finally make that happen. HER TROUBLED COWBOY releases 12/13/16 and is up for pre-order now! Readers were introduced to his heroine, Caitlin, in book 4 of my Harland County Series, Her Forever Cowboy. She’s the sister to the heroine, and had a cameo—and a fling with Keiffer—in Book 2 of the Citizen Soldier Series, Wyne and Chocolate when Caitlin traveled with his sister to the Poconos for his sister’s wedding. Since then, his buddy has died, and Keiffer has been spiraling out of control. Now, in his story, everything is coming full circle. 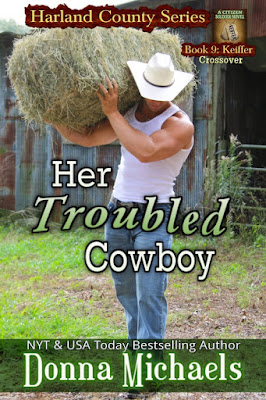 Cover photo by Cover Me Photography with Jose Ruiz

Some incidents from the past are not easily forgotten…

For over a year, former National Guardsman Keiffer Wyne left his past in Pennsylvania to start a new life, drifting from ranch to ranch across the southwest. Unrestricted, nomadic, unaccountable—he embraces the new lifestyle, until he’s called upon to watch over his sister Brandy during her husband’s absence. The problem? She’ll be there. The one woman capable of breaking through his barriers and making him feel.

Caitlin Ryan can’t believe who blew into Harland County looking dangerous, hotter, sexier than the time they shared an unforgettable weekend together. She knows he’s still dealing with the death of his buddy and his mind isn’t in a good place, but neither of them are strong enough to fight their undeniable attraction. Keiffer’s troubled and all wrong for her, counting down the days until he leaves. Too bad she never learned to shy away from trouble…

And last, but as they say, not least, is my upcoming release, IN A RANGER’S ARMS. I’m so excited to have my first release with Entangled Publications. This is Book One in The Men of At-Ease Ranch Series, focusing on former Army Ranger buddies who  opened a transition ranch for returning veterans when another of their buddies nearly died by his own hands the year before. Again, although the underlying message is serious, the books are lighthearted and humorous with a ton of heat.

I was honored to have Vonnie read an ARC and give me this wonderful book quote:

“A hot cowboy hero, a clever heroine, former Rangers, and a jealous cow form the cast of a romance so endearing, you’ll want to read it again and again.”
--Vonnie Davis, author of Black Eagle Ops Series 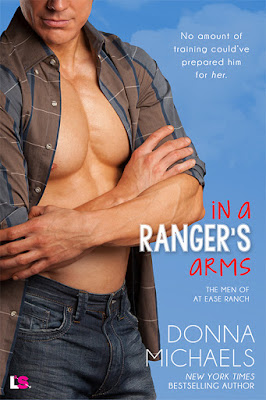 No amount of training could’ve prepared him for her.

Former Army Ranger Stone Mitchum doesn’t have time for sex. Since starting a company with his brother and two buddies, he’s had more important things on his mind. Like transitioning veterans back into society. But when his curvy new tenant falls into his arms—literally—his libido snaps to attention.

Jovy Larson has four weeks to prove she’s worthy of taking over the family business. Her challenge? Sell gluten-free, vegan food—in the middle of cattle country, Texas. It’s a tough task, but not half as tough as fighting her attraction to her sexy, surly landlord.

Before she knows it, Jovy’s tangling sheets with the hot cowboy, stalked by a jealous cow, and strategizing ways to help Stone’s ranch. But by the time her lease runs out and the test is over, she’s faced with a new challenge…competing against Stone’s sense of duty to win his heart.

I know veteran suicide is a tough subject, but I do appreciate you sticking around to the end of my post, and I hope you’ll check out these stories.

Thanks for reading,
~Donna

Read more about Donna at www.DonnaMichaelsAuthor.com
Posted by Donna Michaels at 12:30 AM

Sounds like a tough but worthy topic to tackle. Have fun with all these new releases!

Donna, you are the bomb...three books, a tough topic with a can-do tone...you amaze me! And I can feel the heat coming my way <>! Congrats on these ripe fruits of your labors. And howdy to your hubby whom I was pleased to meet at InD'Tale; big thanks for his service to our country!

Veteran suicide is so close to my heart, Donna. As we've talked via email, my grandson tried suicide a year to the day from his return from Afghanistan. Thank God his gun didn't go off...and that a woman, a nurse, came into his life to give him purpose...and little Benjamin was born to give Josh hope. Your books sound fabulous, but I do have a soft spot for the one I read. It was awesome.

Oh my gosh. What a heartbreaking, yet important topic. I admire you for tackling it. The books all look wonderful. Congrats!

Donna, you are amazing. 3 books released in the same month? Holy cow. What a difficult topic. Thank you for shining a light on it with your books. Best wishes.

What an accomplishment. I wanna be like you! Congrats and good luck.

~Jannine – So very true. Thank you!

~Rolynn – Thanks! There are times I feel like I’m a bomb about to implode and sleep through my deadline. Lol A tough topic, but important. It was great to meet up with you at InD’tale! Michael says thanks. 

~Vonnie – Yes, it’s veteran’s like your grandson that inspired me to write about this subject in three different books, so it gets some exposure. Bless him, and his wife and their cutie pie! And thank you. I’m so thrilled you enjoyed the book, and appreciate the quote!

~Alicia – Thank you so much! I hope they do some good. I’m also happy that IN A RANGER’S ARMS is part of a series, so the subject will be a small thread in two more books, too.

~Diane – Thanks! I didn’t plan it. Everything sort of worked out this way, and now that I look at these releases, it seems like it was meant to be. Like I should’ve planned it from the start. 

~Brenda – lol Thanks! I want to clone me! Gosh, wouldn’t that be great??

Kudos to you, Donna, for tackling this topic. I was shocked the first time I learned of the high suicide rate for veterans. It's heart-breaking to think they survive the horrors of war but can't face life back home. Good luck with all the stories--they sound fabulous.