Those of us writing our blog entries immediately after the election have up-front emotions; to not talk about them seems wrong.  The author in me makes comparisons: I feel like a frog blinking my eyes in a hailstorm.  Or...I'm the Survivor, who after twenty-five days, is blindsided and voted off the island.  I'm seeing Brexit in America...my new term is 'Amerexit;' Britain and America are shocked by the shout-outs of the disenfranchised.

But (re: Survivor), as a 'jury' member, I'm still a player in this game called life in America.  I've earned the right to have my say, so I do not despair.

Now, on to my blog entry:

Four events pushed big changes in my publishing life:
-My old website (iWeb) couldn’t be updated and didn't look great on small screens http://www.rolynnanderson.com
-My former cover artist was too busy to work with me
-I attended a PAN session on Branding at RWA San Diego
-I met Kris Lynn and Cora Ramos at a Conference in Universal City and saw the covers Kris had made for herself and for Cora

Yup, my life in choas followed quickly by a serendipitous alignment of events and people.  Magical!

I’ve already shown you my new website, which took a good six months of work with Kris Lynn.  I’ve told you what I learned about BRANDING on my new website: http://www.rolynnanderson.com/single-post/2016/09/20/Time-to-Rethink-my-Brand-How-about-you
Working on my website and my covers with Kris made me realize a part of my brand was the variety of settings in my novels as well as the lighter side of mystery/suspense/romance…all of which need to be conveyed in my website as well as my covers.

You’ve seen my cover for CÉZANNE’S GHOST, but I’ll attach it here, again, because I'm so proud of it and Kris's work. 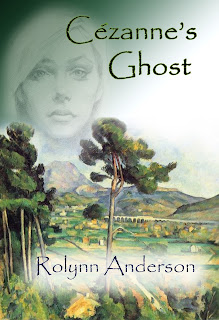 Drum roll, please!  For the first time, you’ll see my cover for BAD LIES.  Yes, you see a golfer poised next to my name; she’s a late-comer to golf competition; he’s a NATO geologist, both facing danger on a Rome golf course and in the caves of the Amalfi Coast. 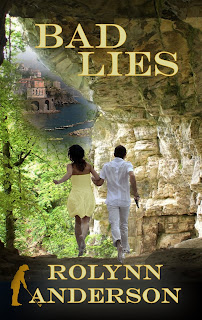 Funny story about this ‘golf’ book.  Back in 2009 when I was shopping this book to agent and publishers, I got scoffs and ‘women don’t want to read about golf.’  In 2011, I went to a conference where a pair of publishers said, “We want a golf book.  How come no one has written a golf romance?”

After revisions and pithy advice from my geologist brother, here’s BAD LIES:
Italy’s haunted caves spell danger for an American golfer and a NATO geologist
****
Sophie Maxwell is a late-blooming, unorthodox golfer, and mother of a precocious thirteen year-old.  Determined to put divorce, bankruptcy, and a penchant for gambling in her past, Sophie goes to Italy for a qualifying golf tournament.
Jack Walker turned his back on a pro golfing career to become a geologist.   As a favor to his ailing father he’ll caddy for Sophie; off hours, he’ll find caves on the Mediterranean coast, suitable for NATO listening posts for terrorist activity.
Someone is determined to stop Jack’s underground hunt and ruin Sophie’s chances to win her tournament.
On a Rome golf course and in the Amalfi coast’s haunted caves, all the odds are stacked against Sophie and Jack.  In their gamble of a lifetime, who wins?
BAD LIES comes out in December, 2016!
Soon: EIGHT Suspense Novels Spiked with Romance
http://www.rolynnanderson.com  (sign up for my newsletter and get one of my short stories, free!)

Love the new cover, Rolynn! And the story sounds great, too. I'm not sure why, but Italy is one of my favorite book settings, especially the countryside. BAD LIES is definitely going on my reading list!

Both covers are breathtaking! I just read the post on your blog, very nice website BTW, and like the way your mind works (danger lurks, and all that). Love the gnat's eyebrow reference regarding research. So true as well. Best of luck with your latest. Regarding your reference to the election. Yes, it is true that we all have the right to have our say. Fortunately, that's what true democracy in this country is all about.

Love the covers and your new website. I do like your brand, esp. the word "spiked"--that sure is descriptive of your writing. Bad Lies sounds so interesting. Another for my TBR pile.

I love the covers, too, and the story's premise. Branding ourselves is hard. Finding that niche that fits us. As for the election, what the hell just happened? I'm getting emails from readers who are "gobsmacked" over who won.

Thanks, Leah. Yes, there's something special about Italy. The hill towns draw me to them every time...and the Amalfi Coast? Breathtaking!

Margo, I appreciate your comments about my website and covers. On branding-it's interesting that we may have to re-brand ourselves after we've written quite a few books. Americans seem more 'ready' to read about a variety of settings abroad, as well, so that's makes my re-branding helpful. I think. I hope!

Diane, thanks for your interest. The tack I take on golf won't bore you, I promise!

Vonnie, you have so many writing niches that you might have to brand yourself as a virtuoso. Across many genres. The lightness, fun, humor is always there though, in your books. That's a huge part of your brand. I just finished Her Survivor...will get the review up pronto. You did a great job handling the PTSD! (And thanks for your compliments on my book covers/premise!)

Your book sounds great, and I love the new cover. The golfer figure is so you! Best of luck with the whole branding thing. Hmm...I guess mine is romance and suspense in the great outdoors. About the only thing my books have in common is beautiful natural settings.

Speaking as a designer and an author, I love your new covers! Branding is so important, and the cover is the main ingredient. It's the first element I've considered in creating the covers for my female bodyguard series. Covers need to be appealing, even in thumbnail format, and suggest the genre and tone of the story. Yours are great!

The covers are gorgeous. How fun to redo your website and find a new artist who can identify you.

Jannine, that is so much your brand...the out-of-doors! I'm reading your rafting novel and enjoying it so much. I almost drowned when I turned over in a canoe with my boyfriend (in college). The waters were so fast and I got pushed against some rocks. Scared the sh-- out of me...I will never set foot in a canoe again. I like READING about vessels in fast waters. Can't wait to finish yours. Thanks for your compliments on my covers!

Oh, Alison, thanks so much for the kudos. You are an artiste when it comes to covers, so I truly appreciate your praise!

Thanks, Brenda. The WORK that goes into each one...I can't believe it! I think I've improved as a 'director' of the cover...but the graphics are WAY beyond me!

Love the covers, Rolynn--and the little golfer is cute, too. Make that your standard.

Love the covers. And the title for Bad Lies, nice play on words. :) Good job on the rebranding. It really seems to fit you.