Is There Anything Like a First Kiss? by Mackenzie Crowne

There are many firsts in life; that first thrilling, solo ride on a bicycle, or that breathtaking view of the ocean, and the nerve wracking experience of sitting behind the wheel of a car. But of all the memorable firsts in one’s life, who can forget their first kiss? Whether a heart pounding realization of a dream with that boy you've been crushing on for weeks or the lousy ending to an interminable blind date your girlfriend set up, there is nothing like a first kiss.

Hollywood is obsessed with them, both in TV and movies, and thank God they are. Audiences waited with bated breath while Sam and Diane (of Cheers fame) circled each other in a lustful dance for an entire season. The episode when they finally locked lips was one of the funniest TV moments I can remember.

The first kiss was taken to a whole new level in 50 First Dates. Because of Lucy's short term memory loss from a head injury, Henry spends each day wooing the woman he loves back into his arms. If you've never seen Lucy and Henry's hilarious romance, you're missing out. 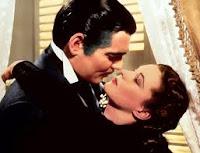 And has there ever been a better movie moment than Rhett and Scarlett's first embrace in Gone With the Wind? As a girl I thought my heart would burst in my chest as Scarlett hung in Rhett's arms, their lips a breath apart. *Sigh* That moment birthed the romance writer in me.

As a reader of romance, the first kiss is all important to whether or not a book remains in my heart or gets tossed into the 'what a waste of time' pile. The moment sets the tone of the characters' ultimate happily ever after, at least for me. A first kiss can be dramatic, lustful, or even funny, but whether the author offers a shy brushing of lips, a shocking, melt your bones devouring, or a nose-bumping calamity, if that first kiss doesn't grab me, chances are the rest of the book won't either.

I write romantic fiction and that first kiss is always a struggle for me. I'd love to say I draw on the memory of my own for inspiration, but I'd be lying. A game of spin the bottle granted me my first lip lock, and while the memory makes me smile, it wasn't exactly the stuff of fantasies.

I’ve included an excerpt below from TO WIN HER BACK, book 4 of my Players series releasing in January 2017. V and Sam’s story is a second chance romance, so their kiss isn’t technically the first. It is, however the first after eighteen years and a bit contentious.

Enjoy and then tell us…How important is the first kiss in the books you read, and what's the story behind your own?

“There was a time you included me in the list of things you wanted.”
The claim hit V like a physical blow and it took all her concentration not to flinch. Denying she’d wanted him wasn’t something she could do with any conviction and they both knew it. Running her gaze down his big body, she hid her dismay beneath pure bluster. “You’re a fine-looking man, Sam. Wanting you was never the problem.”
“I’m glad to hear you still feel that way. That’ll make things easier.”
The fine hair on the back of her neck prickled when he suddenly dropped his hands to his sides and stalked toward her. “Wait. What are talking about?”
“It’s simple.” He closed the distance and she stumbled backward. Stiff-arming him did no good. He gripped both her arms and held her there when she would have scooted clear of him. “You claim you walked away from me to get what you wanted. If that’s true, as far as I’m concerned, I dodged a bullet fifteen years ago. I’m perfectly happy to let that be the end of it.”
Some of the tension eased from her clenched muscles. He may have his doubts but, thankfully, he wasn’t going to press her on them.
“But, it appears providence has other plans.” Her tension returned tenfold as he released one of her arms to slip his hand around her waist. Calculation darkened the blue of his eyes. “Because of our past, my position with the Marauders is shaky when it shouldn’t be.” He slid his hand down her spine and tugged her against him until her breasts smashed flat against the solid muscle of his chest. “Caroline made it clear she expects us to put our personal differences behind us. What better way to convince her we have than to return to Manhattan as a couple?”
She opened her mouth to blast him with a shocked denial, but only succeeded in aiding him as he lowered his head and crushed his mouth to hers. His tongue slid into her mouth with practiced ease. Familiar and irresistible, his woodsy scent and spicy flavor wrapped around her, seeping into her taste buds and absorbing into her skin like a well-remembered balm.
Her knees went loose and, though she struggled to keep her feet beneath her, it was no use. She hung in his embrace, off balance and unable to care, and curled into him as if returning home. His guttural groan was a rumbling vibration against her breasts and she reveled in the knowledge she wasn’t alone in her madness.
He shifted his head, taking the kiss deeper, and time retreated. Mistakes, secrets, and years of regret vanished until only pleasure and heat existed. Desperate for more, she fought her arms free to slide her hands up over his chest and neck, and plunged her fingers into the thick pelt of his hair. She was rewarded by the quick thrust of his hips and cried out at the delicious friction of his erection pressed against her lower belly and mound.

When Mac isn’t dreaming of that perfect first kiss, she spends her time weaving HEAs for her characters, like V and Sam. Their second chance love story, TO WIN HER BACK, book 4 in Mac’s Players series from Kensington Books, releases in January 2017 and is currently available on NetGalley for those of you who are members.
Posted by Mackenzie Crowne at 9:04 AM

Awesome writing as always, Mac. Makes me want to go back and delete my rushed, surprised on at the airport. Darn. Yes, the first kiss is so very important.

You're a sweetheart not to make us wait for it, Mac. Well done. I'd add Linda Howard to your list of writers who taught us some first...second...third...kiss moves. Howard does a good job of matching plot suspense to relationship tension...BIG buildup. Love it!

I've never given a lot of thought to writing first kisses. They've always just sort of happened. Hmm... maybe I should put more consideration into them! As for mine...a college dorm room. I was a late bloomer.

Good post! Love the excerpt. First kisses are the best. At least the most memorable in real life, good or not!

That certainly was an entertaining excerpt. Thanks for sharing. Mine was on the grade school playground by the swing set. His name was Glen, and he wasn't nearly as skilled as Sam.

Your first kisses are always full of punch, Vonnie. And hot. Did I mention hot? :-)

OMG Rolynn, no one does build up like Linda Howard, in both first kisses and her sex scenes. Remember the sex scene on the hidden staircase of Niall's castle in Son of the Morning? Most epic build up EVER!

LOL Jannine. Nothing wrong with blooming late. Geez, I was thirteen. I feel like such a slut now. :-/

You've got that right, Brenda. Even the bad ones linger in the memory. Especially the bad ones. I recall a first, and only, kiss with a guy when I was sixteen. I'd just reached the age when I was allowed to date and a friend set us up. We just didn't click. Still, he went for the goodnight kiss. God, it was like locking lips with a dead fish. The memory still gives me the willies.

Way to go, Margo! I'm feeling much better about my early start now. LOL And yeah, no one is as skilled as Sam. :-)

Mac, thanks for both the trip down Memory Lane and the incitement to think about my literary first kisses a bit more. Yours was great--your literary one, here presented that is; I have no idea how the spin the bottle ended up!

I loved the 1st kiss btwn Scarlett and Rhett, both book and movie. I agree about Linda Howard. OMG, she sure can set the page on fire. LOL My first kiss ever? Truthfully, I can't remember. First kiss with Hubs? Oh, yeah. I remember that one!

Great post, Mac! Fantastic excerpt, and I agree completely with your examples. I've never put too much deliberate focus on the first kiss, either as a reader or writer, but you have me thinking! Now please excuse me while I go dig out my copy of Son of the Morning. :-)

Great post. I definitely remember Sam and Diane's first kiss. I loved Rhett's and Scarlett's, of course. And, 50 First Dates--awesome movie. Another fantastic first kiss was Ross and Rachel on Friends. I'm kind of a sucker for the build-up, the dance, the angst, the will they/won't they. Once they do, I lose a little interest. :/ Ha. I don't really remember my first kiss. Well, maybe I do, my first 'real' kiss was with my manager at A&W Rootbeer (he was just a few years older than me, and kind of had a 'routine' with girls, LOL. I confess, I haven't read many of Linda Howard's books, and I don't recall any of her first kisses or love scenes. Guess I should check them out. Great excerpt!!