I have always enjoyed reading about Native American lore. I've got a notebook filled with delightful gems I want to use someday. Through my research I've made friends with some Natives who follow the Red Road, or live the Native life as much as possible in this modern world. One I met through my son--his former mother-in-law. Ryan's Grandma Grace of the MiqMaq tribe sent me a shell, a large feather, and dried sage with instructions on how to purify my home and myself--smudging. In fact here is a picture of Grace in her full regalia holding Ryan before taking him into his first dance circle when he was a year old. His Native name is Lil Muin, or little bear. Don't you love his pasty white German skin against hers? Now that he's grown, he's simply called Muin. The MiqMaq tribe is originally from the New Hampshire and lower Canadian areas. 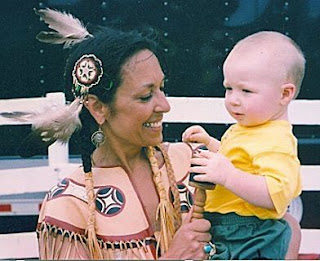 In my Black Eagle Ops series, the small town of Warrior Falls was built around Wounded Warrior Falls. As "my" legend would have it, Natives would bring their wounded and carry them beneath the waterfalls, reported to have healing properties. But was that it or was there more to the legend? In both books of the series, these waterfalls come into play.

In book one, HER SURVIVOR, Kelcee is going to take Dustin under the waterfalls. Dressed in their swimming suits, she leads him to the edge of the pond beyond the falls...
Once they stood at the edge of the path to the pond’s edge, he asked how deep it was in the center.
“There are smooth stones shaped like steps that go out for about five or six feet. Then it drops over my head.” She tugged off her shirt and tossed it on top of the towels.
He held her hand and together they descended the natural stairs or had they been placed there centuries ago by Natives? The water was the temperature he expected; initially cool, but easy to warm up to since the sun had beat on it all day.
A few steps and they were under the surface. He looked around. The current created by the waterfalls felt like home. Damn, I missed this. The frogman swam around, investigating plants and rocks. Kelcee tapped his shoulder and pointed to the falls. She was eager to show him. He nodded and took her hand.
She led him toward the muffled roar of the waterfalls. They surfaced to walk under them, picked their way over the mound of rocks worn smooth over time, breeched the force of the falls, and stepped into a cave. After the initial foot or two, the grotto was dry and about the size of a small bedroom.
He turned slowly, imagining Apache women treating their Native sons, fathers, and husbands who’d returned from battle injured. “If only these stone walls could talk.”
“Wait, there’s more to see.” She grabbed a flashlight from the top of a high boulder, took his hand, and led him back an opening, so narrow they had to turn sideways to maneuver through to whatever she wanted to show him. At one point, she flashed the beam higher. “Look.”
There were crude, yet beautiful etchings of horses, men, deer, and buffalo. How old could these be? Centuries? If one had a more powerful light and the time to do it, Dustin bet they’d find these drawings were stories of battles of long ago. Important stories. His curiosity was definitely chugging in high gear.
A sharp turn illuminated by the flashlight’s beam veered toward the left and eventually they stepped into an opening. A bubbling pool of water about eight feet across centered the area with a six-foot flattened dirt perimeter.
“In here are the famed healing stones with magical healing properties. It’s kept secret. Only a handful of people know about it, otherwise it would become infested with tourists. Our town, these falls, this spot, we keep as pristine as we can in honor of the Apaches who once lived here.”
“Wow. I read both of the books you gave me  and there was no mention of these boiling springs.” He dropped to his knees and dipped his hand into the water. On an impulse, he scooped a handful over his scared cheek. What the hell? What could it hurt? The water burned his skin, made it tingle below the surface.
“If the book’s written by an outsider, we block off the narrow passage with boulders so the author or researcher has no idea there’s more than the initial grotto.”
“Good idea. I wonder how deep this pool is. Have you ever gotten in here?” He glanced at Kelcee.
“No. I was afraid there might be bones of Apaches and other warriors down there and I didn’t want to disturb them.”
She was very big on protecting the sanctity of this place. He could understand why. There was a spirit here; he could sense it. To stay too long would be an intrusion.
“Please understand I’m trusting you with something very special. Frank didn’t show this to me until he was almost too ill to make the swim here. Owning the property across the street, he was always the unofficial caretaker of this secret. The town council knows and he was on it. Now, as owner of the bookstore, I serve on it, too. I’m one of the secret bearers. We reveal the secret to no one or the one person we trust the most.” She placed a hand on his chest and pierced his gaze with her green eyes. “For me, that’s you.”
*** For now, HER SURVIVOR is on sale for 99 cents. I love a bargain. Don't you? 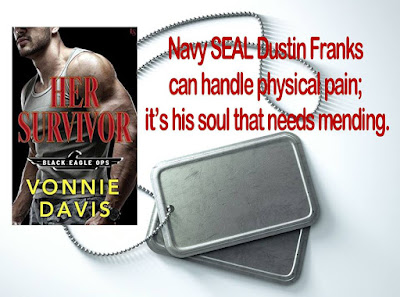 ***heavy sigh*** You taught and entertained me today, Vonnie. Thank you. Best of luck with this one too.

Nice. In the first book of my Love and Murder series, my hero and heroine are both part Hopi Indian. Heroine is half. I had wanted to weave in native lore. I'm a card carrying Indian. But I hit some obstacles in my research and didn't get too deeply into their heritage. You've inspired me so maybe with the next series.

Fascinating, Vonnie. Beautiful pic of Ryan and his grandmother. I am 1/8 Cherokee, but I am afraid I know very little about Native American history. Your excerpt was fabulous!!!

Love the picture of Ryan and his grandmother. I grew up reading Hiawatha and Native American legends. The name Michigan came from an Ojibwa word meaning large water. Many towns have Native American names. Great post, Vonnie.

Nice excerpt! I use caves with Native American drawings as part of my treasure hunt in Wilde One. I love that we have such a rich, diverse culture as part of our past in this country. Great that you were able to use it.

Great excerpt, Von. Your heroine is mindful of the need to keep natural/cultural treasures safe, a huge concern of my National Parks characters. The problem of vetting, again...allowing the reverent and careful in, only. I'm off to download Her Survivor...thanks for the 99c sale price! Pic of Ryan...precious!

So glad you stopped by, Angela.

Margo, I always love to entertain. I think I was a vaudevillian in another life. (snort)

Oh, Brenda, I think that would be fabulous. It'll add another layer of humanity to your book. And, for history buffs like me, it'll touch that part of our minds that yearn to learn something.

Thanks for the compliment, Alicia. Both of Calvin's grandmothers were Native American--Monican and Cherokee. We both enjoy their rich history.

You've educated me, Diane. I did not know where the name Michigan came from and my sister-in-law grew up there. I've visited the state several times. So many of our pretty and poetic names for places and rivers are Native American. I grew up in south central PA near the Susquehanna River.

I love our diversity here, too, Jannine. We're all the better for it.

Thanks, Rolynn. We need to preserve our natural and historical heritage. As for the picture of Ryan, I was glad to be there to witness his being taken into and accepted in the dance circle celebration. It was a new experience for me.

What a wonderful picture of Ryan and his other grandma. I'm fascinated by Native American lore, too, although my family is pure northern European, through and through.

I qualify for the DAR. As far as I know, I'm mostly German and Netherlands in origin, Alison. I like to think French, too, since I feel so at home there. No doubt those are whimsical thoughts.

Funny you should mention smudging, Vonnie. On my recent trip to Santa Fe I bought several bundles of sage for smudging the home--and me. Can't wait to try it. Their scent is fabulous. I wasn't aware eastern nations also had that tradition. Thanks for posting, and for the lovely photo.

You're quite welcome, Andi. Yes, eastern nations use this tradition, as well.

Yes, it is a cute photo of Ryan and his grammy, isn't it? Thanks, Leah.