February is the month of Love. Every one knows it and everyone embraces it (with the exception of many grade school aged boys). While researching the holiday of Valentine's day, I've seen in one place that men spend the most money and another that says women hold that distinction. But does money need to play an important role in showing someone your affection for them?

It can sometimes be a difficult thing to show your love for another. There are many levels of love. My first love was at the age of four. I fell in love with an actor named Guy Williams. I saw him in a movie titled "Captain Sindbad". He was the most wonder man I'd ever seen and growing up at the movie theater, I'd seen many in the first four years of my life. Five years later, I found him again in the Walt Disney version of "Zorro". Again I was thunderstruck.

My love of Guy lasted many years. I've written fan-fiction for his version of Zorro. In 2001, I had the privilege of working with a group, along with Guy Jr., in getting Guy his posthumous star on the Hollywood Walk of Fame.

I was further working on getting Guy "Legend" status at Disney via letting the powers that be know that Guy was as huge part of the building of Disney Land in California in the 50's by proceeds raised from Zorro merchandise. We wanted them to know that after all of these years, Guy as Zorro was still encouraging writers, artists and young people. We compiled and submitted two books of fan-fiction, artwork and letters confirming his continued inspiration.

I had to leave the group due to work restrictions. This second honor was bestowed on Guy in 2011. I have no regrets at being a part of these projects to honor my first love, Armando Catalano, better known as Guy Williams.(Zorro, Prof. John Robinson of Lost in Space). 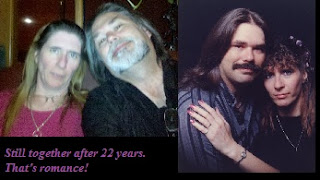 I can't spend so much time talking about love and not mention my husband of twenty-two years, Steve. When we met, he told me that he was not a romantic person. Over the years, he's shown me that the statement was not altogether true. He's made a few fabulous shows of romance. One spectacular example is the piece he wrote for ShadowsForge, Retaking America, book three in the series. Lead singer Geoff Richards is trying to decide how to propose to Valerie Leonard. I hope you enjoy it:
_________________

Geoff dropped the ring into his pocket, squared his shoulders, stepped up to the door and knocked. An eternity passed before Valerie answered with a smile.
“I’ll be right with you.” Valerie went to the table, shutting down her laptop as Geoff waited in the doorway. She was wearing the same outfit she had worn at the interview, navy blue slacks that fit every curve, blue blouse and black heels. We’ve come full circle.
“I thought we’d eat in my room, if that’s all right with you.”
Valerie nodded. “Sounds good to me. I’m ready.” She stepped past Geoff, allowing him to pull her door closed.
Geoff put his arm around her as they walked in silence down the hall to his room. Valerie smiled when he opened the door for her. The lights were dim. The drapes were open, providing the backdrop of a starry night sky. A table had been set up, dinner for two. Candles, white tablecloth, champagne, and a single white rose.
“This is beautiful. Not exactly your style but I love it.”
She moved to the window. While she enjoyed the view, Geoff took the ring from his pocket, hoping the perfect opportunity would present itself. He stepped up behind her, trying to think of the right words as he palmed the ring.
She glanced up at him. “I wish I could hold the stars in my hand.”
He couldn’t have asked for a better opening. “Would you like me to get them for you?”
Valerie looked over her shoulder at him. “You’d do that for me?”
He smiled his media smile. “Watch this.” He wrapped one arm around her, pulling her back against his chest. He swept the star field back and forth as he gathered every twinkling light. Holding them tight, he showed her his closed fist. Reaching around her with both arms, he worked to compact the stars, tucking in any escaping starlight between his fingers. He wrapped his arm around her again, opening his hand. The ring sparkled in his palm, reflecting the candlelight. “The stars—for you.” 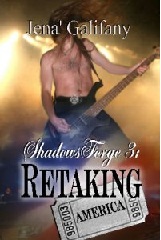 Being an ex-roadie, Steve gives me the technical guidance for back stage with ShadowsForge but I believe he gave me the most romantic moment in Retaking America.

Expressions of love don't have to cost money. In my opinion, I'd rather have kind words softly spoken than pink verse mass produced with a single name signed at the bottom. I'd rather have a circle of warm arms embracing me than a cold piece of metal to adorn my skin. Give me the scent of a real man, not the fragrance of dying blossoms. Time with the one that I love is what I want most on St. Valentine's Day or any day of the week, month or year, for that matter.

Now that's what I call speaking, rather writing from the heart. How very special. Thank you for sharing, Jena.

Good for you for giving that extra effort for an actor you believed in. Great story.

Thank you for your kind words.