Love: Oh, How It Can Be Difficult Sometimes by Jena Galifany 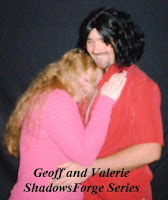 Have you notice that LOVE can be difficult sometimes? It's never easy to begin a new relationship. Meeting, getting to know one another, knowing how quickly to move each step of the way. Thank God that I have Steve and don't ever have to go through any of that again. I've caught my limit.

But for those who are still in the game, I wish you the best of everything in the newness of discovering that special someone.

Geoff Richards, on the other hand, starts a new meaningful relationship nearly every night. He's the lead voice for the 80s British rock band ShadowsForge, and he falls in love at least once every twenty-four hours... until he meets the one woman who doesn't fall for him in the first moments of their meeting. Now it's imperative that he make Valerie fall for him. His ego is at stake.

Before long, he falls into his own trap. The love bug has taken a bite out of him but how will he change his ways and remain faithful to the woman he loves?  He's doing his best, keeping to himself, until one week after the band leaves Valerie in London and heads across the pond to the U.S.A. for more tour dates, Geoff falls off the fidelity wagon. At least he thinks he did. Why else would Diane, the wardrobe lady for the band, be in his bed when he wakes up. What will Valerie think of him now? If only he could remember what happened the night before.

Geoff awoke to the thrumming of the road beneath the wheels.  It sounded like Valerie calling his name.  He felt a twinge of guilt as he looked around for her.  Setting up, he pushed aside the curtain, looking forward.  Valerie wasn’t there.  Puzzled, Geoff dropped the curtain, turning over to return to his pillow.

“Geoff?” Valerie knelt on the bed beside him.  He was startled to find her so close, not knowing how or when she had gotten there.

“That’s not what Nigel told me.” She wore a sad look in her eyes that raised a lump in Geoff’s throat.

“What did Nigel tell you?” He raked his fingers through his hair, hoping that the manager hadn’t told her everything.  “You know how much he likes to embellish things for the sake of publicity.”

“He told me that you attacked someone.  That you took a girl to your room and forced her.”  A tear escaped, making its way down her silky cheek.

“Do you believe him?” Geoff tried to play it off.  He wasn’t exactly sure what he had done, making it difficult to defend himself.  He'd puzzled for the last day and a half, trying to remember but nothing was clear.  Now his foolishness was causing the lady he loved heartache and he didn’t know what to do about it.

“I do, Baby.” He tried to reach out to her.  He ached to hold her, to show her how much he loved her.  She pulled away, anger clouding her blue eyes.

“You don’t know what love is.”  She spat the words out, point blank.  “You sing about it every night but you have no idea what it is or how it works.”  Geoff could see her rage building.  He pulled himself to his knees facing her, trying again to reach for her.

“NO.“  She pulled a butcher’s knife from the edge of the mattress.  Geoff felt the blood drain from his face.  She stood on her knees, wild eyes targeting him.  “You love me.  No one else.”  She slashed the knife at him, barely missing his chest as he fell back.

“Val, listen to me.  I drank too much.  I was missing you.” He tried to explain, afraid to run; afraid she would stab him in the back if he attempted it.  The words poured in a frantic string from his lips.  “I don’t know what happened.  I didn’t even know who she was until morning.”

The words rolled off his tongue with the hope that she would understand how drunk he was.  If she knew that he wasn’t coherent enough to know what he was doing, perhaps she would forgive him. He wanted to make a go of this relationship, hating himself for making such a mess of it.

“I was too drunk to walk straight so I had someone help me to my room.  I don’t remember anything after that.  I swear.  If I did anything to her, I don’t remember.”  His heart tried to pound its way out of his chest.

“You swear that you didn’t know it was Diane?”  Valerie lowered the blade to a less threatening angle.

“I swear it, Baby.”  Geoff stood on his knees, spreading his arms in surrender, hoping she would believe his sincerity.  He felt even worse that she knew it was Diane.  She worked his words over in her mind.  Her eyes softened and the hint of a smile touched her lips, inviting him to relax.

Geoff has trouble with many women, but he truly wants a real relationship Valerie, a relationship with one woman like his band-mate Ty Synclair has with his wife, Alexis. He's finding out that love can be difficult but will it be worth it in the end?

I hope your love situation is more simple, more sincere, and less complicated than Geoff Richard's situation with Valerie and Diane. I hope that your Valentine's Day was everything you dreamed it would be... and more. I hope that you find love in the little things as well as the big things in life.

Cheers!
Jena
Posted by JenaGalifany at 12:30 AM

You're right, Jena, love is hard. And even after you've found it, you still have to work at it.

I'm blessed. With Steve we don't so much work at it as refine it. It keeps getting better after 22 years together. =) But anything worth having is work working for or on.