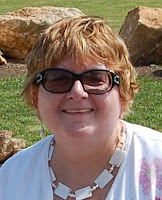 By Vonnie Davis ~
Our Brenda is anxiously waiting the arrival of her first grandchild--and we are all eager for her birth announcement. I'm the grandmother of six, ranging in age from thirteen to twenty-four--a wonderment since I'm only twenty-nine.

Mention the word "grandma" and a stereotypical grey-haired lady often comes to mind. But we all know this is not necessarily so. Many grandmas are young, vibrant and active. Yes, we still bake cookies. We still play wordgames late into the night when the grandkids are over. My grandkids expect all-night James Bond marathons when they come to visit, complete with homemade pizzas and popcorn. But in today's world grandmas also text and tweet and post on facebook. 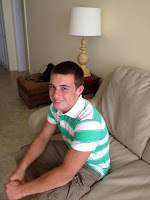 My grandchildren live in Indiana and Maryland, while Calvin and I reside in southern Virginia. I keep in touch via social media and the grandkids think it's cool I know this stuff. Of course, they also use it to their advantage from time-to-time. Take my fifteen-year-old grandson who sent me a text Monday evening: I love u, G-ma. I mean I rlly love u, BTW I got all A's this marking pd. How's that for being "hit up" for his reward? You see, I started the tradition years ago: A straight "A" report card is worth a hundred dollars. Kids, they never forget. 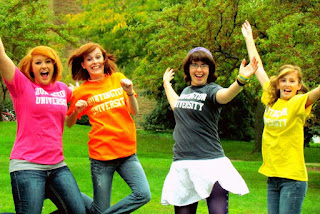 One of my granddaughters is a college freshman. She posts a gazillion pictures on facebook. Here's one of her "studying" with her friends. She's the one in yellow. If she sees I'm online, she instant messages. The night she had her heart broken, we texted for hours as she poured out her heart in teenage angst. "But grandma, I loooooove him soooooo much!!!!!!!!" I'm thinking she has a heavy-duty exclaimation point on the laptop I bought her. Of course I was concerned, texting and IM'ing her everyday for several weeks. I sent her care packages and a big cuddly baboon with a sign hanging around his neck: "Mr. Right".
They know I'm a sucker for books and often email me with a book wish list. Yup, like most grandmas, I'm a softie where they're concerned. They know a few days after they hit SEND on that email, a package from Amazon will arrive. 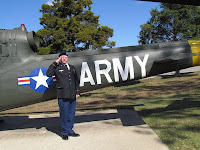 I miss them. I've missed a lot of their lives living as far away as we do. Still, like most grandparents, we travel to see them in many of their activities--dance recitals, baseball and football games, bowling tournaments and wrestling meets. Graduations from high school and Army Basic Training. Sure there are the traditional letters and goofy cards, but more and more we rely on social media to keep in touch. And, surprisingly, it seems more personal. Who would have thought? When my grandson was in Afghanistan, we emailed and texted almost daily. Josh needed a few words from me and I needed to know he was okay. When two of his buddies were killed in front of him, I was the one of the first people he contacted with a long, rambling email.
Every grandma has her own way of showing love. The important thing is that we DO. We add an extra layer of security and unconditional love to their lives.
Posted by Vonnie Davis ~ Romance Author at 12:51 AM

Wow, Vonnie, I bet your grandkids think they have the coolest grandma ever! What a sweet post. No grandkids here - just teenaged daughters. Want to adopt one?

You give all of us grandmas a good, make that GREAT name. Your time's coming', Jannine! Hang in there.