I Love the USA by Barbara Edwards 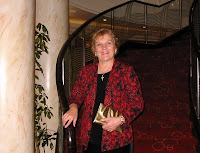 With everyone talking about romantic love this month, I had a hard time deciding on a love topic. I was going to do a travel post about this beautiful country but need to find the right pictures... So....
Being the grand-daughter of immigrants is the most powerful reason why I love this country. I remember my Grand-mother at the age of sixty decided to become a citizen. She had to learn to read and write English to take the exam although she was already fluent in Polish. She was always a stay-at-home wife although she arrived here with the promise of a job as a second story maid for the Parsons Estate. My Grand-father was the head gardener there.

My other Grandmother emigrated with a Jewish family who needed a child-care worker to help the nanny.  My Grand-father and his brothers were sent to the Americas by their father when the Russian Army conscripted all the young men from Poland. They were go to Brazil, but my Grand-father was so sea-sick he refused to continue after they reached New York.

They prized this country. It gave them the opportunity to find jobs, buy homes and raise their children without fear of the government.

Maybe the fact my uncles fought in WWII in France, Italy, North Africa and the Pacific Theater for the Army, Navy and Marines adds to my belief this country is worth my love. PS my aunt riveted airplane wings and my Father worked in the Brooklyn Navy Yards on the ships.

Don’t let me forget my husband is a retired policeman, another way to serve and love your country. My grandson is going to college to take up law enforcement.

This country enabled me to be the first in my family to get a college degree. I worked as a waitress to pay my tuition and for my books until I got a scholarship. Then I worked at the school to pay part of my costs.

I try to write that love into my historical romances. I know my children love this country. My daughter Theresa and her husband Donald Spahr were in the Army. My oldest son and his wife retired from the Navy. My youngest son was in the Navy on a submarine. Another grandson and a granddaughter are in the Navy.

To this day I hear the National Anthem and choke up. I can’t sing God Bless America without crying.
I love the United States of America. I hope you take the time to remember why you do, too.

Visit www.barbaraedwards.net for free reads and excerpts from my books.

You made me choke up reading this. May we keep this country strong and not lose the values so many fought for. I too have a husband retired from law enforcement and a son still serving. What a great place to be.

Margo,
thanks for sharing

Loved hearing the history of your family, Barbara. Immigrants like your ancestors are who shaped this country into the great nation it is. Sure we have problems, but when we look back at the reasons people left their homes to come here, it puts them into perspective.

Hi jannine,
It does give us perspective.