This quote is so true in romance novels. If the course of love did run smooth, readers would be bored out of their skulls. So would authors. I’ll admit to feeling bad when obstacles get in my characters’ ways, but those obstacles are also what make things exciting. They are what reveal character traits and personalities. They are what build a strong relationship between the hero and heroine. They are what eventually lead to a happily ever after or a happily for now ending.

This year, I tried something new in playing with characters and their courses to true love. It’s called Kindle Worlds, an Amazon-controlled program in which Amazon has licensing agreements with other artistic works that allows authors to essentially write “episodes” of their favorite television shows or books. You can borrow the characters and the setting and branch off into those storylines you’ve always dreamed about seeing.

This might be the right time to tell you I’m obsessed with the CW television show The Vampire Diaries.

And yes, Amazon does have an agreement with this show.

So, I buckled down and wrote a 14,000-word novella based on vampire Damon Salvatore of The Vampire Diaries. If you’ve never seen him, see him immediately right here, wipe the drool off your chin, and come back to read the rest of this post.

Right? Gorgeous? Thought so. An inspiring muse to say the least.

I decided to put him with a new character that I created, Angelique DeLucas. She’s got her own supernatural twist and the relationship she has with Damon in this novella is not without its bumpy spots. Something happens at the end that could create a really bumpy spot should I decide to write more in this series.

Writing for Kindle Worlds was a new adventure. It was fun and I’ll see where it takes me.

Because the course of writing never does run smooth either…

Here’s the blurb for The Vampire Diaries: Blood Angel -

Vampire Damon Salvatore has returned from The Other Side only to find his true love, Elena Gilbert, has compelled all memories of loving him out of her mind. Needing an escape from the heartbreak, he heads for the woods of northern Vermont, the best place for a man—or a vampire—to lose himself.

Angelique DeLucas was robbed of her life when a drunk driver slammed into her car. She begged for a second chance while on The Other Side and her wish was granted—not without a price. She’s lived the reckless life she’d been cheated out of and has kept up her side of the deal she made.

Until she finds Damon Salvatore in her woods.

Damon and Angelique spend two weeks together in the snow-covered mountains, finding what’s been missing in their lives in each other. An admission on Valentine’s Day, however, threatens to take all the magic between them away. 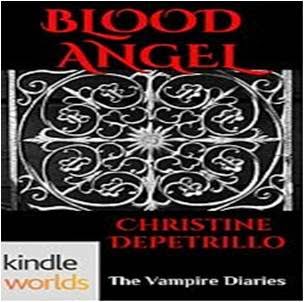 This novella can be found here. Did I mention part of the story takes place on Valentine's Day? Yep, it does.

If you’re a fan of the show or just love a little supernatural short story, download it and enjoy. Maybe even browse the works Amazon has an agreement with. You might find some inspiration for a little side project for yourself.

Chris
The Maple Leaf Series, Available on Amazon, print and ebook
www.christinedepetrillo.weebly.com
Posted by Christine DePetrillo at 12:00 AM

Oh my gosh, Chris! I did not know you were obsessed with TVD. I am too!!! And Damon...sigh... I was actually one of the launch authors for Kindle Worlds and I published two TVD stories and a Gossip Girl story. :) I have been to two conferences and I have met...and touched Ian. I've had my pic made with him twice. He's even more beautiful in person, and he's sooo good to his fans, so personable. It'd very cool to discover this about you. I'm going to check out your story right now! Sounds awesome.

Okay, the guy is hot. But, dare I admit I've never watched Vampire Diaries. (Holding up hands as Chris and Ally throw things at me. LOL) My confession--when they took All My Children off the air, I wanted to write a better ending. Theirs pretty much sucked. So if Kindle Worlds ever delves into discontinued soaps, I'm all over it! Best of luck with sales!

I must admit I'm not a fan of the show (yeah...ducking like Jannine!), but I became an instant admirer of Mr. Somerhalder once introduced to him by Ms. Dean. :-) Kindle Worlds is an intriguing project. Glad you had fun with it!