Thine, Thou, and Romance by Brenda Whiteside 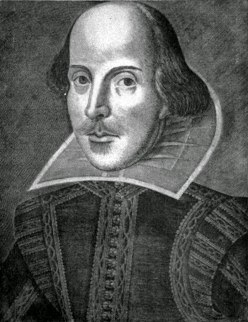 I 'm probably one of the few who, in high school, actually liked Shakespeare. Not that I fully understood what I read. The struggle to grasp the language of his prose was more than frustrating at times. But when I did get it, I thoroughly enjoyed the read. Could that have been my introduction to romance?

Many years later, I talked my husband into season tickets for a block of Shakespeare's plays at a theater in Phoenix. It took some talking. I was so glad I'd struggled to understand his style years before. Listening to the actors on stage took a great deal of concentration to fully enjoy play. My husband wasn't quite so enamored with Shakespeare.

And never will, especially in novel form, thank you Mr. Shakespeare. Our romance novels would be quite boring if all that happened was boy meets girl, boy gets girl. The romance genre does depend on the happily ever after ending, but getting there should be a tumultuous journey that excites and sweetens the ending.

They didn't call any of Shakespeare's stories romance back then. But he'd certainly score big in the romance genre nowadays is my guess. Although, his hero and heroine didn't always get their HEA. Romeo and Juliet can still bring me to tears.

Writing murder mysteries is all in a day's work until an obsessed fan brings Phoebe's stories to life.

Email ThisBlogThis!Share to TwitterShare to FacebookShare to Pinterest
Labels: brenda whiteside, romance, Southwest of Love and Murder, The Roses of Prose

I kind of liked Shakespeare in HS and college. Still have a passage from Macbeth memorized. And on occasion, I go watch a Shakespeare play performed at Sand Harbor in the summer. Imagine all those great lines spoken under the stars with Lake Tahoe as a backdrop while you drink wine and eat a picnic dinner... Geez, I should go more often!

Oh my, Jannine. I want to go there. Haven't been to Tahoe in years but sounds like it's time to go back.

Truer words have never been spoken. There's another quote that seems appropriate. Great minds, Brenda, I'm revisiting your idea in my post here the 11th. Must be - uh - true, huh? Wine, stars, summer. I want to go there too.

Hi, Ladies! I became a big Shakespeare fan when I began attending Shakespeare in the Park. The stories never made sense to me until then because Shakespeare was meant to be spoken, not read. Have a wonderful day and love the book.

You have that right, Margo.

I hadn't thought of it that way, Vicki. I know when I see the plays I do get so much more out of the actions and dialogue.

Before we moved, we used to go to Stratford, Ontario for the Shakespeare Festival. Thoroughly enjoyed the plays that, like you, I didn't fully understand in h.s. Saw Christopher Plummer twice. What presence!

Shakespeare is either crystal clear to the reader, or clear as mud. lol I understood the books we read in high school, but admit, I didn't go out of my way to read on my own. My daughter enjoys them, though. :-)

Best of luck with your release! I love the premise!

Glad to hear your daughter is into them, Donna.