Pet month: what, only a month?

I've had a variety of pets throughout my life -- cats, dogs, hamsters, chameleons, canaries, turtles -- most came from a shelter and most were surprisingly long-lived. I think that's something that people don't consider when they adopt. A lot of the time, these critters will be with us for a decade or more. All of my books (20+ and counting) feature a pet. Even Lie to Me, my cross-country adventure that started with the Blind Date from Hell, has a homeless kitten as a major character. Candy, Corpses, and Classified Ads has a pet pig that digs up a body -- thus kicking off the story. Even my futuristic series featured a woman who could speak telepathically with animals.

I know I've learned a lot from my pets. I think, as I get older, the one thing I appreciate about pets is what they teach me about aging. They accept it -- they slow down but they still show interest in the things they love to do (bird watching or chasing that ball. Who cares if the bird gets away or the ball gets away? It's the interest that matters, right?) They don't complain (okay, maybe a little whine now and again) and they don't moan about aching joints, etc. They rest when they need to, they eat when they're hungry, and they play when they feel like it.

I think that's a good prescription for life, don't you? Rest as needed, eat when hungry, and play the rest of the time.

I might just put that advice to good use! 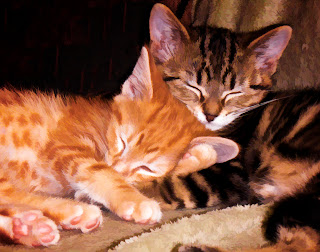 I think pets have an amazing way of bringing us back down to earth and calming us. When we're worried, upset or angry, just the sight of a pet looking back at us with pure innocence, affection and serenity is enough to mend shattered nerves. A cuddles works wonders too :-)

I've had two pets, both cats, in my adult life (which is longer than I'd like to admit). The first lived to be 19 and the second 14. They add a huge amount of pleasure to our lives, but my husband says he won't get another one until he's sure it will outlive him. It's so hard to say goodbye.

Pets so enrich our lives! Cut cat pic too.

Love the kitty photo. I, too, have had a pet (actually a dog) in every one of my books. I think it adds that extra something...

Don't know what I would do with out my pets. They have always been part of the family.

I think having a pet in a story tells us more about the heart and character of the pet's owner, whether it's the hero or heroine, than scads of paragraphs of often boring introspection. If our pets bring out the best of us in real life, shouldn't they do it for our characters, as well? Great post.