I love coming home. I know for certain and without fail, Colbie will be sitting in the window waiting. Immediately, her tail starts wagging and she leaps down and greets me at the door. There's nothing like the feeling knowing she'll be there faithfully. That's what a dog does for you. Loves you unconditionally.

Colbie is a Australian Shepherd mix dog. She weighs almost sixty pounds now. When we first got her, she weighed 15 pounds. She's a shelter dog. We got her as a puppy from Tennessee. She was found in a paper bag in a dumpster with her litter mates. 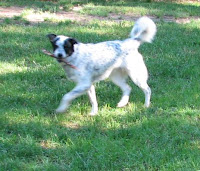 This blog is about Adopt-a-pet. I could go on about the virtues of owning a dog for a pet. They are loyal; you would never be alone; they would protect you. But the virtues of adopting a pet means you are giving back. You are reaching out and making a difference in their lives. Kinda like paying it forward. And I can attest that they give you far more than you give them.

Colbie is part of our family. My son has a lab, Dexter, that's only a couple of months older than Colbie. They are inseperable and so adorable. Quite opposites. Colbie is fearless and protective; Dexter is the one needing protecting- a big teddy bear. You don't see one without the other. The yard is Colbie's domain. Bird, chipmunk, or squirrel enters at their own risk. Well, at least without the birds Dexter can enjoy the outdoors. He's got a phobia about birds. It developed when a wild turkey scared him...although a lot of things scare Dexter, but not with Colbie by his side. Dexter gets into his own fair share of trouble with Colbie playing lookout. Watching the two together puts a smile on my face.

If you're looking for a pet, look first at a shelter. We got our cat from a shelter too. Wouldn't trade them for the world!

Have a good one!

Email ThisBlogThis!Share to TwitterShare to FacebookShare to Pinterest
Labels: Adopt-a-pet, dogs, jerri hines, shelter dogs, The Roses of Prose Where Romance is Never Out of Season

Thanks for sharing your precious puppies. They are adorable.

I have a rescue dog. I adopted Cassie from Middle TN Sheltie Rescue, and she has enriched my life beyond measure.

Don't know what I would do without my doggies. Always brighten my day. The shelter we got Colbie from was from TN. It was funny because they brought her to us all the way up here in Massachusetts. They have drop off points along the East Coast. It was awesome.

Love the photos of your baby. Ginger is also a shelter dog. There's much to be said about the unconditional love of a dog. They don't talk back, at least not much! LOL

My Dixie is adopted, too. I never expected how wonderful she would be. She travels with us everywhere and right now is in her favorite spot, next to my feet.
Barbara

They are the best. Aren't they. You're right, Jannine, they don't talk back, but Colbie knows how to get her way without saying a word. Barbara, I know what you mean. Colbie's at my feet at the moment!