I recently had the chance to experience terror, second-hand. Maybe 'experience' is too strong a word since I didn't experience it, but I heard about the effects of terror.

I know 2 people who are terrified of dogs. Not just scared, terrified. I'm not sure why one person is, but the other person was attacked by dogs when she was a child and she's never gotten over it. Both people -- strong, intelligent, independent women -- become children again when confronted by a dog. In fact, the one person is terrified of any mammal (bunny, horse, dog, cat) and avoids them at all costs.One of those people recently had a close encounter with a dog. I won't go into details, but suffice it to say, she got Way Too Close to a dog and it absolutely threw her for a loop.

The interesting thing about this is: it gave me a great idea for a book, especially when our neighbor's dog got loose and ran around like a Crazy Thing for a morning. That dog was having a great time: jumping in leaves, chasing chipmunks (chipmunks in our yard have never seen a dog so they were TERRIFIED), snapping at imaginary foes... pure bliss. I laughed just to watch him then I realized that if one of those people who were afraid of dogs had been there, she probably would have felt attacked, cornered, threatened. 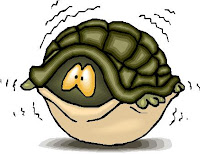 What a difference in perception! One thought led to another, and I considered Pandora, our kitten. She is totally fearless UNTIL people come to our house. Then she's under the bed. She will leap off of decks, climb walls, clamber up onto fans (yes, she's done that), but if she hears a stranger's voice ... GONE.

Fear is powerful. That made me think about how to have a fear become a murder weapon.

That led me to think: what terrifies me?

I honestly can't think of anything. Oh, if a giant spider came at me I'd scream. Then I'd grab a shovel and start whacking. I suppose a gang of thugs would terrify me. I suppose being thrown off a cliff would terrify me. But I couldn't think of anything that I might encounter on a daily basis that terrifies me. That started me thinking ... do those who are afraid walk around, checking their environment for potential danger? Fear is a powerful weapon and one that can be used as a threat, an inducement, and relief from fear can be used as a reward.

I love when daily living becomes entwined with my writing. I can't WAIT to sit down and start writing the book (I already have the title: "Dogged". Heh heh). It just goes to show you that one woman's fear is another woman's inspiration. I'm going to try to keep that in mind the next time I'm spooked or scared -- maybe somebody is taking notes and I'll show up in a book (or a song or a story).

Email ThisBlogThis!Share to TwitterShare to FacebookShare to Pinterest
Labels: fears, J L Wilson, what scares you

What a wonderful plot device! I use fear in my writing but not like you propose. Good idea.
Barbara

This post made me think. Years ago I encountered a woman and her husband in the woods near my home every day. I imagine they were tourists using a vacation rental since I'd never seen them before. She was terrified of my dog, yelled at me to get it away from her, acted like I was a criminal because it wasn't leashed. (We're talking lab here not a rabid pit bull!) Now, if you have a phobia like this, shouldn't you stay away from situations where you'll meet it head on instead of inflicting your fear on others? Needless to say, I was thrilled when they stopped showing up in my neck of the woods! But I ask you, how do people like this cope with ordinary life?

I love the way you can see a book out of an everyday occurrence. Does make you think. Love your picture...

Great blog. Well, I can confess on this forum that I too am scared of dogs. Scared of the small ones, terrified of the big ones. I don't know why I have this fear because I have never actually been attacked. I'd be like the lady in the woods, I'd run off and never return if confronted by a dog.

I can understand the one person's phobia, and as I said, I don't know the other person's. I love animals of just about any kind (and prefer dogs to many people I know), so I don't understand the phobia, I can only wonder at what those folks are missing.

Margaret, being "confronted by a dog" is way different than meeting up with one snuffling around the cabin. I've faced down strange dogs and it does set my heart a-racing, and I'm an old hand at handling critters. Sometimes a fear is a Good Thing, as Martha Stewart would say!