I'm afraid of the dark

I’m afraid of the dark.
Well, not exactly the dark. I’m afraid of the shadows that move in the dark. More precisely what the shadows conceal. Fear of the dark can be explained as a primitive survival instinct. Cavemen huddled around the fire not only for warmth but because the wild animals cringed away from the dancing flames. Outside the circle could be hard the growls of the hunters and the screams of their prey. They feared what they could not see.
In Gothic tales, the heroine hurries down the dark hall with a flickering candle in her trembling hand. Will the draft blow out the flame before she reaches safety?
Modern ghost hunters always turn off the lights. Why? I’d keep every lamp burning until dawn if I were in one of those infamous sites like Alcatraz or the Norwich Insane Asylum. And they see movement in the dark, shadows that dart across the room.
So we’re back to my fear.
I grew up next to an old cemetery. I don’t know when I became afraid. During the day the place had an old-fashioned charm and peace. The monuments told a sad story of a child who died after three years two months and seven days on this mortal soil or joined with the others in the family. I’ll never forget the smell of that place. Shaded by huge pine trees the green grass was crowded by a sour smelling weed. When crushed underfoot the weed odor filled the air.
We played among the head stones all summer. Sometimes after supper, we’d play hide-n-seek until dark. I wasn’t afraid until the long evening when I was the last one ‘it’. As I counted to one hundred, they all crept away. I was left alone, calling names. Where are you? Come out. Come out, until I realized they’d abandoned me. 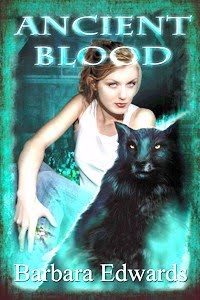 Now I write dark and frightening paranormal romance to get the ghosts out of my head.
I have a few scary short stories posted on my blog under why visit here.
http://barbaraedwardscomments/wordpress.com/

If you want to meet me, I’ll be at the Write Angles Conference 2011
By writers, for writers — in its 26th year in Western Massachusetts Mount Holyoke, East Hadley MA
PANEL SESSION II – 11:15 am to 12:30 pm (Choose one)
Exploring the Avenues and Lanes of Sci-Fi/Fantasy (Andreola Room)
Moderator: Tanya Shersnow
Panelists: Holly Black, Corrina Lawson, Barbara Edwards
This panel will explore the sub-genres within this ever expanding genre, giving attendees a sense of what’s new in 2011, and offer advice and inspiration about associations and publishers within this genre.
Author Website: http://barbaraedwards.net/

Ooh Barbara,
That was spooky. I would have been scared witless if left alone in a darkened cemetery. My hubby hates cemeteries. Even in the day time he reckons they give him the creeps.

Hi Margaret,
I'm still fascinated by cemeteries. I actually do etching rubbings from old tombstones as a hobby. But I go during the day with my husband as an escort.
Barbara

I used to be, now most vampire stores put me to sleep.
Patg

Okay. I'm strange, but I love cemeteries...my husbands laughs at me because I can't pass one up at times. I've taken my children to all the cemeteries where their long passed relatives are buried. When I visited Charleston, I walked through three cemeteries while I was there. I feel the history and wonder what's behind the story of their life. Not a scary person...most of the time.

I also find cemeteries fascinating. But I wouldn't want to be left alone at night in the dark most anywhere!

I like the old ones with lots of character. It's been done to death, but the cemetary scene on a dark night gets me every time!

I've visted cemeteries all over the country and none are as scary as New England. Even Spanish Moss blowing over a southern family plot isn't the same as a dark and stormy northern night.

As a young child, I was taken to many cemetaries on Sunday afternoons by my mother and aunt, who loved gossiping about the dead. "Oh, look at the expensive headstone that tight-fisted John Marcus bought for his wife. Yet when Mary Martha was alive, he never bought her one new dress." And on the stories would go.

Would I go into a cemetary at night? Heavens no! I'm not merely old, I'm an old CHICKEN.

Well written post, Barb. Gave me the "creepies" reading it.

I used to be afraid of what happened after the darkness fell each evening. It was scary at my house. My parents fought a lot. Even now -- I'm a grammy and I still don't like the darkness. I have to turn on a light and even keep a nightlight on above the stove. LOL