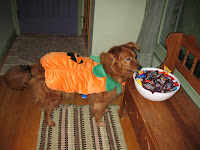 I'll miss Halloween this year. Not because I'll be on some other planet, but I'll be tucked upstairs at our temporary digs. We can't see or hear the outside door. No one will even know we live up here. IF it's not TOO cold, we might sit outside for awhile and hand out candy. I really do get a kick out of seeing the kids in their costumes. I think my dog, Rusty, enjoys it as much as I do. If the little ones aren't afraid of him, he gets in a few good face lickings before I can pull him back.

I miss how Halloween was when I was a kid. I have memories of getting home baked goodies - brownies, cookies decorated like jack-o-lantern faces and gingerbread. And all flavors of popcorn balls. There would be the occasional house with a witch at the door who would invite you in for some witchy brew. We'd have to take pillowcases for our collection bag, there was so much. Then when we'd get home, my cousins and I would have to fight off our mothers to keep them from stealing their favorites. That was all part of the fun.

But before I was too old to go out trick or treating, things started changing. Some kids were sickened by purposely tainted cookies. Razor blades were found in popcorn balls. People started handing out more and more packaged candy - some of it the yucky hard kind. We weren't allowed to go into neighbors homes because the scary stuff was really scary and not pretend scary anymore.

When my son was little we started throwing Halloween parties for the kids to cut back on the dangers of door to door trick or treating. We would take him to a few houses he knew then to the party. Malls began having trick or treating - store to store candy collecting.

Maybe Halloween is like I remember it in small towns across the U.S. I was raised in a city that grew to a sprawling, dangerous metropolis faster than I went from tiny one to youngster. I like to think somewhere Halloween is filled with pretend scary, brownies, popcorn balls, caramel apples and frosted cookies.

Is it big city or small town Halloween where you are? Do you steal the best treats out of your kids bags?
Brenda can be connected with at:
www.brendawhiteside.com
www.facebook.com/BrendaWhitesideAuthor
brenda@brendawhiteside.com
You can find Sleeping with the Lights On wherever e-books or print books are sold.
Look for her upcoming releases:

Tattoos, Leather and Studs coming in Nov 2011
An Elfin Secret and On the Way to the Snow Ball (anthology) in Nov 2011
Honey on White Bread coming Jan 2012
The Morning After coming summer 2012
Posted by Brenda Whiteside at 12:01 AM

Hi Brenda,
Nice post. I don't celebrate Halloween at all and it is not very big here in Australia not like in the US, but I personally would find it too dangerous now to send kids around to different houses. Sad but true. How despicable, contaminating candy.

Brenda,
I love your dog's costume. He's so cute! As for Halloween, I do love having the kids come by in their costumes. They're adorable. I have always thought Halloween to be kinda silly though. We tell our kids never to take anything from a stranger, yet one night a year we walk them from house to house with their bags held out. Fun, though, and good memories!

Margaret, no Halloween in Australia. I never gave a thought to where the holiday is celebrated.

Jerri, that's the truth, isn't it. I never put it in that context but how ridiculously true.

I remember those Halloween days. too bad they're part of the 'good old days' now.
Barbara

And we never thought we'd say that, did we!? Ha.

I grew up in suburban Kansas City, and trick-or-treating was quite safe, although I remember getting pretty cold and tired before my friends were ready to call it a night. Now it seems we get fewer kids every year, and I do love seeing the little ones in their costumes.

There were years at the house we just moved from when we didn't get a half dozen kids. Then others we would get triple that number. But you're right, the numbers have dwindled.

Wasn't allowed to celebrate Halloween as a kid. My family was devoutly Catholic, and my mom was convinced that if we trick-or-treated, we'd drop to our knees and worship Satan. Small town. Weird ideas.

Actually, I saw a resurgence of that several years back when I was living in Arizona. There were some schools that outlawed the holiday, saying it was evil. And I thought Halloween was not to worship evil but to ward it off. I should google that.

In Tahoe there are a lot of neighborhoods (like mine) with second homeowners. So everyone goes to the one neighborhood loaded with year round residents. The kids go wild trick-or-treating, and the parents have their own party while they wait. My kids are 12 & 14 so I don't have to walk door to door anymore. They go with their friends, and it is all very safe. So, yes, small town America does still have old fashioned trick-or-treating. Something to be thankful for!

Sounds like a lot of fun, Jannine, even for the parents!

I used to adore having kids come trick or treating at our door. I had treat bags made up weeks in advance, hidden in the closet so Calvin wouldn't sneak a bag or two. I filled them with various candy bars and boxed raisins. But over the years trick-or-treaters have changed, too. Kids now glare at you and say, "You're only giving me ONE?" Or they shake their bags and demand, "Give me more!" One teenager rolled her eyes at me when I waited for her to extend her treat bag to me instead of my stepping out to her...oh, and she had to stop texting to do this which probably irked her sensibilities even more. I love the tiny tricksters with their running, skipping excitement but I can do without the teenagers' rudeness.

I'm kind of the mind that by the time they reach the teens, they can stop the door to door stuff. I know we went up into our teens but we were still kids in those early teen years. At least compared to now, I think.

Trick or treat still seems to be popular in my Arizona neighborhood. (possibly due to the perfect weather this time of year) I only buy candy I like so I can nibble along with the costumed visitors. Not sure how it is for today's kids, but I always thought of it as a magical night since we had a professional make up artist living up the street who went all out to scare the crap out of the kids brave enough to go up to his door. The year he was a werewolf I almost peed my pants! Fun times. LOL

What fun. Love it when adults really get into the act. Never was my thing but I appreciate others' efforts. One of my son's friend's father totally went all out. They lived in a 2 story house and for two weeks they turned it into a haunted house that was free to tour. The whole family dressed up every night. It was a scream.