Hi, Margaret Tanner here. It isn’t Christmas, but I thought this story would be relevant because it does have a spooky element.

“Will you show me around? The softly spoken stranger asked.  Ash did not move from his lounging position. Who the hell is this idiot, asking me, the leader of the Mongrels street gang, to play tour guide?


“Do you know who I am, mate?” He dragged on his cigarette and purposely blew smoke into the man’s face.
“Yes, I know who you are.”
“Then p…off, while you’re still able to.”
Ash surprised himself by not punching the man’s face in, but something about this stranger, a nagging sensation dredged from somewhere deep down, stilled his hand.  Maybe I’m being generous because it’s Christmas.  Had they met before, in the days before drugs and crime banished him from the world of ordinary people?  An undercover cop perhaps?
“If you’re a cop and they find out.”  He jerked his finger towards the pinball parlour. “You’re dead meat.”
“I’m not a cop.  I’d just like you to show me around your world, Ashley.”
How the hell does he know my name? Now nineteen years old Ash had lived on the streets for six years. Feels like sixty sometimes.  Housebreaking, mugging, selling his body to gutter crawlers, he had done everything short of murder to get money for a fix. How many thousands of dollars had he injected into his veins over the years, before he got himself off the hard stuff?
They headed towards the railway yards where the graffiti artists displayed their work. “Merry Christmas,” he stumbled over the words.  “Peace on earth.” He gave up the struggle. “Haven’t tried that.”  He tossed his head so the several ear studs he wore were shown off to their best advantage.  “Can’t write much and I don’t like drawing.”
He stuck his hands into the pocket of the leather jacket he recently stole from a department store.  He would probably end up selling it after a few days, depended on how things went.  Christmas meant plenty of money around, and people got careless over the holidays.
“I solicited here sometimes.” He jerked his thumb towards a poorly lit toilet block. “Good place to roll people too.”  He waited for the stranger to condemn him, but he didn’t.
“You could pull yourself out of his hell, Ashley.”
“Nah. What’s the use?  It’s not such a bad life.”  He wasn’t having some soppy do-gooder feeling sorry for him.  He hated the life but wouldn’t admit it on pain of death.  What else could he do anyway?
“Tell me about your parents.”
“Don’t have any. When me mother died I cleared off.”  Hatred that had lain dormant for years surfaced, but he pushed it aside, trying to think of something to say or do to shock this nosy stranger.
They passed shops adorned with Christmas decorations, and a fat old Santa ho-ho-hoed his way along the street as they headed towards the sleazy nightclubs where young girls plied their trade.  He waved to Brooke who opened the passenger door of a white Mercedes.
“She used to be my girl once.”
“You don’t mind if she goes with other men?”
“Nah, why should I?”  I could kill some of those old sleazebags, but Brooke lived on borrowed time, so would her clients if they weren’t careful.  He snickered inwardly because she had a deadly STD.
A heavily pregnant girl limped up to them.  Her arms and legs were matchstick thin, her skin drawn so tightly over her cheek bones the blue veins stood out. One of her eyes looked swollen and black.
“Here, get yourself something for Christmas, Mel.” Ash dragged a crumpled ten-dollar note from his pocket and shoved it at her.
“You could help these people,” the stranger said again.
“Listen, if you’re a cop or one of those do-gooders, I’ll…”
“You’ll do what?”
“Kill you.”
“But you haven’t taken a life before.”
“Yeah, well there’s always a first time. Don’t think it makes any difference to me if it’s bloody Christmas Eve, same as any other night to me.   I seen you somewhere before. Dunno where, but a long time ago.”
They wandered along the beachfront.  “Poor old bugger.” Ash pried Keith’s fingers from the empty sherry bottle, buttoned up the old man’s gaping coat and re-arranged the newspapers over him.
“Got bad lungs, night air will kill him one day.  I don’t want cops swarming all over the place.” Ash excused his act of kindness.
They traveled all over Ash’s territory. Brightly lit streets with Christmas carols blaring out from loud speakers, along dingy alleyways where addicts lounged in doorways or negotiated with pushers.
“Want me to steal us a car?”
“No, I prefer to walk.”
At Greasy Sam’s they stopped to order hamburgers.  As they waited in the cubicle, the stranger started nagging him again.
“You’re the only one who can help these people, they trust you.”
“Why should I?  Anyway, who are you to tell me what to do?”
“These people are suffering.”
“And what the hell would you know about suffering?  Have you ever been hungry and cold? Repeatedly stabbed by some pimp like me?  Seen your friends die from an overdose?  Watched your old lady being bashed?” The hatred that had poisoned his system for years spewed out, as the stranger listened without interruption. Ash shook with emotion by the time he finished, and he felt almost light headed with relief.
“Promise me, Ashley, that you will help these people, because I can’t.” The stranger stared at him with sadness and regret etched into his face. “I can only stay a short time.” 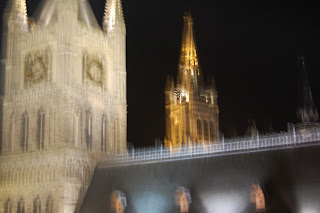 What intense eyes he had. Ash blinked several times.  A roaring sound almost ruptured his eardrums.  He remembered where he had seen this man before.  In a picture hanging inside a church he was vandalizing.  At the last minute something stopped him from lighting the match that would have burned the place to the ground.
“Remember me now, Ashley?”
“No.  You can’t be the same man because… All right, I’ll try to help these people, but leave me alone.”  He hardly recognised his own voice because it sounded so fearful.  I’m losing my mind.  It can’t be the same man.
“I am the man,” the stranger said, spreading his hands on the table.
Ash closed his eyes so he wouldn’t have to look at the nail holes, but he vowed to help the street kids. When he finally glanced up he was alone.  What a relief, he’d been hallucinating. That bloody plum pudding he had stolen must have been contaminated.  He was suffering from food poisoning, seeing people who weren’t even there.
Sam plodded up wearing his usual glum face. “Where did your friend go?” he sniveled. “You’ll have to pay for both hamburgers if he doesn’t come back.”
If you would like to check out my books, my website is:
http://www.margarettanner.com/

Posted by Margaret Tanner at 1:17 AM

Hi Margaret,
Your story might not be for Halloween, but it has a wonderful theme for the coming Holidays. Thank you for sharing. It touched my heart.
Barbara

Margaret,
Loved the story. Thanks for sharing.

Wonderful story, Margaret. You did an incredible job of painting the street scene where these people live.

Hi Barbara, Jannine and Jerri,
Thank you for dropping by and for your kinds words, I appreciate it.