Remember when Halloween was all about the kids?

Remember before Halloween was an opportunity for grown-ups to act bad and dress in very inappropriate outfits?

I do. I remember Halloween when the big event was to wander the streets of our small town, bag out for treats. I remember huddling with other kids on the corner to compare treats. "Old man Swanson is giving popcorn balls again. Yish." "Go to the schoolteacher's house. They've got good stuff."

I remember one year, when I was about 8 or 9. The house down the street from us was always rented out. It was a 2-story Victorian, and the top story had access to the cupola, where we would occasionally see lights on at night. Cool.

So my sisters and I go up to the top-floor apartment. Kids in those days had no fear (at least, growing up in a small town, we had none). We tromped on up the stairs and knocked on the door. "Trick or treat!"

Two schoolteachers lived there. (In hindsight: were they gay? I have no idea. They were young and pretty, that's all I remember).

"Okay," one of the ladies said. "Before you get a treat, you have to do a trick."

This totally flummoxed us. We had never been asked to do a trick before. After much stammering and prompting, it was discovered that my elder sister could perform a cartwheel, which she did to much applause. My middle sister did a tap dance--to much applause.

Now it was my turn. What could I do? I had a dreadful stammering problem, so recitation was out of the question ... or was it? We had been given an assignment in school to memorize a poem. Some people tackled The Highwayman, or Paul Revere's Ride. Not me. I found one I really liked...a lot. To this day, I remember that poem.

I stepped up, clasped my hands in front of me, and said:

They walked down the lane together
The sky was studded with stars.
They reached the gate in silence.
And he lifted down the bars.
She neither smiled nor thanked him
Because she knew not how.
For he was just a farmer's boy
And she was a Jersey cow.


Then I curtsied and held out my bag.

We got a lot of loot from those schoolteachers, once they got done laughing and clapping ...

Now that's what Halloween is all about! 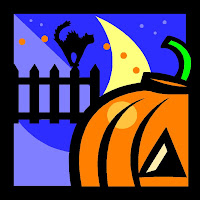 Wow, JL, great recitation. I can picture the joy in that accomplishment. I wish we could return to those simpler times.
Barbara

Love it, JL! What a memory. I was never asked to do a trick, but I can't imagine what I would have come up with.

I do remember being asked to do a trick a couple of times. As I can't remember what I did, it probably wasn't nearly as impressive as your poem! LOL What a great memory.

What a delightful story! I, too, had a terrible stammering problem, one that's stuck with me even better than the ton of Oreo cookies on my hips. I can speak a smattering of Spanish, French and Japanese all with a distinctive and painful stutter. So I can identify with your pride in your recitation. Well done..." a Jersey cow"...love it.