When It Doesn't Work, Change It by Kayelle Allen @kayelleallen #SciFi #Art

Our guest today has something for everyone. You'll enjoy her cover journey whether you're a reader or writer AND there's a freebie for EVERYONE! Let's welcome Kayelle Allen. 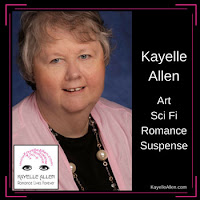 I spent months researching images and artists to make the best cover for my new book, Bringer of Chaos: Forged in Fire. When I found an artist whose work I liked, I asked questions and checked prices. Eventually, I found a super talented artist (Brumae), asked her to do it and was happy to pay her fee. She was easy to work with and did a wonderful job. I would hire her for other images in a heartbeat.

Unfortunately, my idea of the perfect cover came across as more urban fantasy than science fiction. Everyone loved the art -- but it didn't work for the story.

I discovered the right cover entices readers to pick it up and have a closer look. Although the original was gorgeous and had beautiful artwork, the readers I was trying to reach were not picking it up. I had to admit I'd chosen the wrong part of the story to feature. Painful as it was, I had to make a change.

I chose a different image, one of a planet with extensive volcanic activity. The blues harmonized well with the first cover (here) and the reds fit the story's title, Forged in Fire. It has a sense of movement and life. It's uncluttered.

The phrase "Bringer of Chaos" is in a font called Sabotage, which you can get free on www.dafont.com. It absolutely fits the man known by that title.

So there you have it. Lovely cover. Not working. Changes made. What do you think of the new look? Feel free to leave a comment.

Bringer of Chaos: Forged in Fire

When the immortal Pietas is marooned on a barren world with no food and few survival tools, he knows it could be worse. He could be alone. But that's the problem. He's not.

Half a million of his people sleep in cryostasis, trapped inside their pods and it's up to Pietas to free them. He can't release one at a time. It's all or nothing. He's facing over five hundred thousand hungry, thirsty, homeless immortals who will call on him for rescue and he has no way to answer.

It's not all bad. The beautiful telepathic warrior he's loved for lifetimes is at his side. He's bonded with a sentient panther. He hates humans but the one dumped on this planet with him has become a trusted friend.

Before Pietas can build shelter, figure out how to grow food, or set up a government, he must take back command from a ruthless enemy he's fought for centuries. His brutal, merciless father.

Immortals may heal, but a wound of the heart lasts forever...

Amazon and in print. Free on Kindle Unlimited
http://amzn.to/2ABIcCI

Here is a free adult coloring book to download and print, based on my character, Pietas. If you like dragons, you will love this. I hope you enjoy it! It contains both purchased and licensed images and original art. http://bit.ly/color-pietas

Welcome, Kayelle! Wow, sounds like a fantastic story. Your cover is gorgeous, and you're so right that it can make all the difference in the world. Good call. Congrats to your talented designer as well!

Way back when I first started publishing, I really didn't realize how important a cover could be. Now, it's so important to me. You're in a good position when you self publish to be in control of it. Thanks for the post.

Welcome, Kayelle. Your covers are amazing. Covers can make me check out a book or pass it by. One of my pet peeves is not being able to read the author's name. You are fortunate you found an artist that you can work with. Mine is like that, too.

Covers are certainly key. And it's super important that your cover reflects the right genre. My publisher actually redid covers for one of my series because the originals looked more like contemporary romance than romantic suspense. The second set of covers gave them a much more suspenseful vibe in keeping with the branding for me they were going for. It's incredible how a cover can make or break a book!

Welcome, Kayelle, and thanks, as always for your leadership on MFRW! The tricky part for covers and authors, is letting go of the idea we have to totally represent the story in the book...in favor of 1.Representing our genre and 2.Getting the reader to open up the book and sample it! That's why we hire experts. Kayelle, your cover does both things! Well done.

Thank you so much for these affirmations. They tell me I'm heading in the right direction. I'm already thinking about the cover for book 3 in this series. I'm inspired by the look of things. Seeing an image can spark a whole new story. It's important to me to have images that reflect the story, but immediately identify the genre. Like Rolynn said, if no one will pick up the book to look closer... well, that's why we hire the pros.