Why would you tackle a sub-genre of Romance you don't read? #amwriting #paranormal #bear shifters by Vonnie Davis 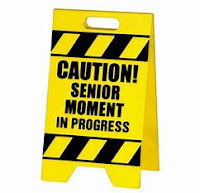 If I've told you this story before, please, let's chalk it up to a senior moment. I seem to have them at random.

I was recovering from cancer surgery to my saliva gland—of all places—when a pair of large golden spots began to glow in the back of my mind. These strange apparitions didn’t go away. Brain cancer, I thought. The surgeons didn’t get it all and the cancer’s spread to the back of my head. Just as I was ready to call the doctor’s office to make a dreaded appointment, the glowing neon yellow spots blinked. Blinked, mind you!

Eyes?
These spots I’d tried my best to ignore for two weeks were eyes? Well hell, I didn’t need a cancer doctor. I needed a shrink!
For almost a month as I healed, making daily trips to the doctor to have liquid drained from my swollen face, these yellow eyes watched and waited and willed me to speak to them. Now, I might be a tad crazy, but even I know better than to talk to things that shouldn’t be there.
So, one night as I was drifting off to sleep, the eyes moved. They floated from my head and into the face of a huge brown bear standing at the foot of my bed. Since I believe book characters often search for an author to write their stories, I told him he was at the wrong house. That I didn’t write children’s stories. He shook his large head. “Oh, you’re not that kind of bear?” He silently shook his head again. It was an eerie moment.
Then to my surprise and delight, he shifted into a kilt-wearing Scot with long dark hair. “Oh gee, you’re still at the wrong writer’s house. I don’t write paranormal. I don’t even read it.”
He sauntered to my side of the bed and sat. “Aye, lassie, but ye will.” His Scottish brogue sent a shiver skittering over my skin. “Scoot over and I’ll tell ye how bears came to be extinct in Scotland.”
I snuggled closer to Calvin and the bigger-than-life Scot stretched out on the bed next to me with one hand beneath his head. He told me the most bizarre, imagination boosting tale of his ancestors. He said his name was Creighton Matheson—Mathe meaning bear. I absorbed every detail of his family’s legend.
What do you think was the first thing I did when I woke up the next morning? I googled “Are bears extinct in Scotland?” They were. In fact, I found an article where the UK was trying to re-introduce the species into the Highlands. The article claimed the bears were shot into extinction by hunters in the previous century. But I had a better story…straight from the mouth of a bear shifter.
I was told by a woman who reads auras that the bear was my totem; my healer when I got sick. Who’d have thought?
My series of shifters began with almost zero knowledge of the paranormal genre. I hadn’t intended for anyone to read them because I felt like a fake writing about something I was ignorant of—but, oh, what fun I had writing for my own enjoyment.No pressure because I didn't intend to show them to anyone. My agent at the time told an editor at Random House about my “play stories.” The editor read the first three chapters of one and gave me a contract for three books in a series. The books and novellas have continued and I’ve fallen in love with the bear shifters with the glowing, golden eyes. 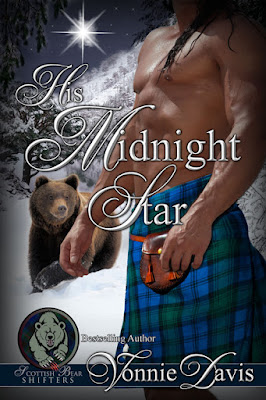 In His Midnight Star, Bear has made a close connection to Star. He expects her to stay in Scotland with him and his human half, but she can't. Or so she thinks. Bear brings her three heart-shaped stones as presents...
“How wonderful! Even when I leave and go back to the States, I’ll have these to remind me of you and Gunner. Thank you so much, I love them."
Bear howled and stamped his foot. He reached for Gunner’s kilt and wrapped it around Star. He pointed and his jaws popped."
“I love you, Bear, but I can’t stay. I must go back to Georgia.”
A pained roar bellowed from his throat. Would he get angry and attack? Her heart pounded a fearful beat. To her surprise, he marched to the corner of the room, sat with his back toward her and his face in the angle. His shoulders were slumped and he moaned and moaned.
Great, a bear that throws tantrums. How can I make him understand when a large part of me wants to return to Scotland once I kntow I’m okay? I’m too confused to help anyone…or anything…at this point. I need some distance to think clearly about Gunner and me
She charged into the kitchen. What few dirty dishes were in the sink were covered by a large fish Bear had no doubt thrown there. Maybe he was hungry. She carried the fish into the bedroom and dropped it on Bear’s lap. “Eat this and calm down.”
No sooner had she whirled around and made a few steps than the fish slapped her in the back. She yelped and spun in his direction. Bear’s back was to her again. Oh, two can play this game. She bent, picked up the fish, and threw it at the back of his head. He growled and started to shift.
~~~~~~
Ah, a food fight with a shifter. No one ever accused me of being normal. Have a grand day.
www.vonniedavis.com
Posted by Vonnie Davis at 12:01 AM

Vonnie, we love your abnormality. :) You are such fun. Hope Calvin is continuing to improve.

Thank you, Vonnie, for making me smile on a rainy back-to-work (ugh) Monday. Such a fun behind-the-series story! I never have dreams about hunky, kilt-wearing Scotsmen from the Highlands! :-)

Normal can be so very boring. ...what fun I had writing for my own enjoyment. Kinda says it all for me. Something we, as writers, need to remember and hang on to.

When the brown bear was standing at the foot of your bed, I decided I needed another mug of coffee (LOL!) to get through whatever came next!

Love the story of how you started writing your bear shifter series. Golden eyes, huh? That would've freaked me out. They say to write what you know. You proved them wrong. Good job.

Wonderful story. And great to delve into the unknown. Sounds like you succeeded.

Vonnie, your imagination is borderless and amazing to behold. I've learned so much from you regarding 'characters in the head' authors, but the totem concept is new. I say the role those golden eyes played in distracting you from the cancer, is a perfect pairing. Kinda crowded in the bed, but I assume you have a king and Calvin is accommodating to threesomes :-) I'm so glad your agent/publisher saw the worth of your Bear...and readers are gobbling up the stories. Here's to you, girl!

Vonnie, if the books are as good as the tale of how they came to be written, you're on to three winners. Great fun, too.

Hmmm... my characters don't talk to me. I'm feeling left out! I love the fish fight. Keep doing what you do, Vonnie, because you do it very well!

So funny. My characters talk to be, but none have morphed from an animal to a human. Maybe the other way around with one villain, but not as a rule.

You asked if we'd ever written in a genre we don't read. Not yet, but there's always a chance...

Thank you, Caroline. Thanks also for asking about Calvin. He had his second echo-cardiogram from being in the hospital when his heart function was at 20%. Even with all the meds, it's still holding at 20%. Average is 70-75% since the heart must retain some blood. He gets moody at times and I spoil him, which he enjoys.

Leah, I've had men on horseback come charging into mu bedroom. A mam on a Harley slowly circle our bed--a feat since our headboard is against the wall. French government agents tell me I'd written a scene all wrong and they'd never act that way. A little boy lay on our floor and throw a full-blown tantrum. Thank goodness Calvin takes his hearing aides out to sleep.

Oh Margo, how right you are! If I'm not chuckling as I'm writing I know it's going to be a boring story.

My Angela, you are too, too funny. Coffee does help most anything.

Diane, if you only knew what all goes on in my mind. Lucille Ball didn't die, she packed up her lipsticks and moved in.

They tell us to write what we know. Laundry, stretching a whole chicken into 3 meals, cleaning house, killing plants. What kind of book would that make?

Rolynn, my sister was 16 and my brother 10 when I was born. So by the time I was old enough to play outside on my own, she was married and he was in college. My playmates were imaginary ones. Cowboys, Indians, Pirates, and Civil War Belles. We lived on a farm rather isolated. So I learned to use my imagination.

Andrea, the books have been out for a couple years now. A secondary character, a pink-haired Woodstock veteran named Effie, has quite the following. I always make sure she's in every book even as I continue the series on my own.

Part of my mind has never grown up, Jannine. I think that's it. LOL

You go Betsy. I'd love to write political intrigue, but where's the humor in that?

I love this story! My characters don't talk to me in my sleep, but a lot of other weirdos do. LOL

I have heard this story, but it was delightful to hear it again. And, for a second time, it gave me chills. Such a cool story and an awesome series. (I heard it in person at the TWRP retreat. I was enthralled!) Love the excerpt!

Surely you're not calling OG a weirdo!!!

I remember telling it at the retreat, Ally, and thinking afterwards, "Well, you and your big mouth just proved to everyone you're a nut."

Nothing wrong with being considered a nut. I carry the title in my family and I wear the acorn crown proudly.