I've passed the three-quarter mark in my current manuscript, the third and final book in my female bodyguard Phoenix, Ltd. series, so it's time to start mulling my next project. Actually, I've been thinking about this one for several years. I even wrote the first four chapters of the first book while waiting to see if readers would be interested enough in Unwritten Rules to make it worthwhile to write more books in that series. 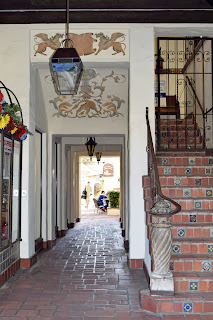 The new series will feature three artist sisters who work in different media: a maker of wind sculptures, a raku potter, and a glass-blower. I don't know much more about the stories,  except that they'll be set here. And therein lies my dilemma. How real do I make the setting? Do I call #Carmel-by-the-Sea by its real name, or does it become Cypress Cove? What about #Monterey? For the purposes of the books, I'm considering re-naming it Otter Bay.

People love to read books set in areas they know. The descriptions bring back a flood of memories associated with the locales depicted in the story. We've all read and enjoyed books like that--they're accurate right down to the street names. The Monterey Peninsula is a spectacular area, full of wonderful potential settings, but it's also a small, fairly tight-knit community. Any errors or bits of artistic license on my part are bound to be noticed by local readers. By setting my books here, I enjoy an automatic boost in local promotional opportunities, but that might be a double-edged sword.

The benefit of re-naming places is that I can manipulate things, put them where I need them, combine places if I want to. I might use a local restaurant as the basis for a fictional one, but if I name it I'd better be pretty darned accurate in my description. The beach stairs have to be in the correct location. I can't have redwood forest overlooking the ocean within a half-hour drive of town, when in fact, there are rocky outcroppings covered by cypress trees or a sweeping, grassy plain. 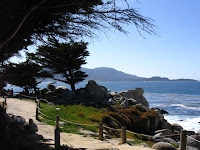 Fictionalizing the setting gives me much more leeway but erodes the realism many readers enjoy. Even if the local population here is small, millions of people have visited here from all over the world. Some may even end up reading this book.

As a reader, or a writer, how do you feel about the strict treatment of real places? Do you love authentic detail, or are you satisfied with authentic atmosphere? I need to know how readers feel because I can go either way, but I know already that setting is going to play a huge part in these books.

It is a dilemma, Alison. As a reader, I love when I read a book using a real setting I'm familiar with, but as a writer, I know the pitfalls you mentioned are very real. I've seen many authors use the real setting as a model for their fictional towns, and that seems to work very well, especially if they mention somewhere in the author notes. Good luck with your decision!

We'll always have nitpickers as readers who FORGET THEY'RE READING FICTION! Fret not about those addled folk. BE the local author, who loves her county so much she wants to write about it. To protect the innocent, I tend to name the town/area (Arroyo Grande), name streets (El Campo) and general flora (Eucalyptus) and fauna (damn ground squirrels), but change up the names of the key businesses I talk about at length: Cypress Ridge Golf Course becomes Cypress Crest, for example. Make up businesses at will, add streets, weird weather, etc. Have fun with it, that's the most important, I think. Mush on!

I've used fictional towns in an area I know, but have my characters visit real towns/cities nearby over the course of the story. I do this when I need a lot of businesses that don't really exist like in my Siren Cove series. But I have set stories in real places. I used Tahoe City for the setting of WILDE SIDE and included real businesses and real ski areas. But you can't have a killer own a business that actually exists, so I made one up for that purpose. No one has complained about it. I think you could use Carmel and add what you need while still using fun places that really exist. How can you go wrong with the Hog's Breath Inn? Either way will work so it's mostly about what you want to do.

I'm one who enjoys reading books that take place in the area I'm visiting, or places I know, and I write similarly. My WIP takes place outside Jackson, WY, for instance, where I have a home. But I don't mention specific shops or roads or similar. I feel creating a town leads to problems for me--trying to connect it to the outside world.

In my series, the town of Amber Heights is fictional but the landmarks I mention in S W Missouri are real.

I'm torn, Leah. I've seen both approaches work well. I'll have to think more about it.

Rolynn, I wouldn't include real business, except maybe a couple of iconic ones--and only in a positive way. I'm having more trouble with wanting to manipulate the landscape to fit my story.

Jannine, you're right--either way can work. I just have to choose the best for this series. In UNWRITTEN RULES, they had lunch at the real Tuck Box, and as you said, how could I go wrong using the Hog's Breath Inn? To do what I want, I'll have to alter the landscape outside the actual town, but I could basically leave Carmel intact.

Andi, a lot of readers are like you--they love to read about places they've been. I didn't plan to create a completely new town from whole cloth, but I'll need some leeway with the details.

This is exactly the dilemma I just had. My first series was set in Flagstaff and Chino Valley, both cities I have lived in or very near to. I used their names but my publisher had me change the names of hotels or restaurants. I did worry a bit about being accurate, but not too much. I did get called on one fictional thing I did which is I moved the railroad track from a nearby city into Chino Valley. A male reader sent me an email. That was in book 2 so in the next 3 I put a disclaimer in the front of the book that I needed to be flexible about the setting to accommodate the story. My next series is going to be set in Jerome, AZ, a famous mining and then ghost town and now a tourist destination. I've been there many times and mixed with some of the locals. I decided it was best to fictionalize it so as not to offend. My stories will be doused with the mystical and I don't want to have to worry about every little accurate detail. If you know the city, you won't be too fooled by by creation. Jerome becomes Joshua. A popular restaurant, The Haunted Hamburger is now The Ghostly Goulash. I'm having fun with building my world based on the real thing. So, if you think you might offend or is it's causing you to feel structured, change it up. Otherwise, such a famous place could help sell you books, if you stay accurate.

One benefit of setting my stories in a 'bygone era' is that I can use real names for cities and landmarks, but fictionalize the minor stuff (eg. names of eateries). One of the distractions I found in the late Sue Grafton's work is that she fictionalized all of the names (Santa Barbara became Santa Teresa, for example). Part of my brain was always trying to work out where the action was taking place.

I use the names of cities and main roads and streets. I often use a restaurant or popular eating spot along the shore. I google to get the address and then put it into www.vpike.com. This works for most any spot in the world. The rest I make up. At the beginning of the book I note that some places included in the book are real, but many are inventions. It's a hard choice to make.

Brenda, it's really a dilemma. I want the nexus of the three stories to be a fictional vegetarian restaurant set on the coast in the redwoods, but not an hour's drive down into Big Sur. There is no landscape exactly like that where I want it to be. I'll have to figure something out.

Phyllis, I know what you mean. I don't think it's important to have the names of any businesses be correct (although I might refer to something iconic like the Tuck Box), but I want to change the landscape a bit--see my answer to Brenda, above. It's a pickle.

I'm leaving some key landscape in place in mine. The Verde Valley is still below my imaginary town. It's still in the same mountains and all the larger towns are the same. For me a blend works. You'll figure it out. I started writing with the real town and names and changed after the first chapter. Just dig in and it will come to you.

There really isn’t a lot I can add to the advice you’ve already received. Those who choose to read books of fiction agree to suspension of disbelief from the get go. I would say to use a mixture of both fact and fiction. The way people, places and things are always evolving, who’s to say some establishment you invent wouldn’t become a reality sometime in the future? Does that make sense? Like Brenda says. Dig in and see what happens.

Vonnie, I've used Google extensively for setting details in towns where I don't live. You can see anything, anwyere! Here, I can just get in my car and check things out in person. My problem is I want to change the landscape a bit.

Margo, I think that's all I can do. If I want to place my fictional restaurant in a grove redwoods where I know there isn't one, I'll probably just do it, anyway. I'm a rebel like that. LOL

Interesting post. Sounds like a fun series! I like the advice you've gotten so far. I often use fictitious locations based on a real location, so I can take license with the businesses, law enforcement, people, etc. But, it is SO much fun to read about actual places I've been to. Maybe a mixture is the key.

I like your setting the story near where you live. Using a fictional town gives you a lot of leeway. In my Alex O'Hara series, I set the stories in a fictional town, based on Holland, Grand Haven, and South Haven (all nearby resort towns on Lake Michigan). I have the characters visit the nearby towns and include local "color" with favorite places. Use what works best for you and your story.