Getting Stuck with #Valentine’s Day by Christine DePetrillo

I always get stuck posting on Valentine’s Day and I don’t like Valentine’s Day. I’ve decided this year to treat you all to an excerpt of characters on their way to being in love instead of a rant on why I think Valentine’s Day is dumb. You’re welcome.

From More Than Pancakes, Book One in The Maple Leaf Series, #FREE in ebook everywhere…

Rick pulled up a chair to the boxes of books Hope and Sage had left in the store by the display shelves. Poe took up residence on the floor beside him and sniffed all the corners of the closest box. He began loading the books on the shelves, turning some of the covers outward so customers could get a good look at them. He didn’t spend a lot of time in the store when customers were in there. He preferred a more behind the scenes involvement in the business and that was part of what had made him not so successful in New York. He liked dealing with the equipment, the actual trees, the land as well as the financial side. Running the business from the city had only allowed him to crunch the numbers and collect the profits. Maybe some folks liked that hands-off approach, but not Rick. He wanted to smell the melting winter, the blooming spring, and the boiling sap.

As he continued stacking books, Poe padded to the door and woofed once at it.

“No customers today, Poe. Not yet.”

She barked again at the door and as she sat by it, a soft knock echoed in the store. Rick put down the books he had in his lap and limped to the nearest window. A Jeep he didn’t recognize was in front of the store along with footprints in the remaining patch of snow. The knock came again, but he couldn’t see who was at the door. He contemplated not answering as he often did when the phone rang, but figured it wouldn’t waste much time to explain the store wasn’t open yet.

He ambled to the door, resting his hand on the tables as he passed by without the cane. As he neared the door, another knock sounded.

“Okay, okay,” he said. “I’m coming.” He cursed his slowness and hoped he’d be rid of the cast soon. Not likely, judging by the ache, but a man could hope.

He reached the door and pulled it open. What was standing on the other side of it made him forget his own name.

A woman. Not much shorter than him with reddish-blond hair that brushed her shoulders and curled about a face meant for makeup commercials. Her skin had a wonderful glow he’d never seen on any native Vermonter, and her eyes were blue-green jewels. Slim, black jeans spanned down two long, shapely legs and disappeared into brown, knee-high leather boots that belonged on a runway not on his partly muddy, partly snowy doorstep. The rust-colored dress coat that hung to her thighs also seemed out of place in this setting, but not out of place on her. The woman was perfection in that coat, and the cream-colored scarf she had looped around her neck fascinated Rick.

Poe barked and the woman jumped. “Is that a coyote?” Her voice, soft yet assertive, matched her delicate mouth and intense eyes, but she looked as if she were ready to run for her vehicle.

“Yeah, but she won’t hurt you. She’s been raised to think she’s a big hamster.” What is this woman doing here? Then the pieces fell into place in his mind. “You’re one of Hope or Sage’s friends, right?” That had to be it, but he didn’t remember ever seeing this one. He didn’t think he could forget her if he had seen her. God, she was tall.

“No,” she said. “I don’t know Hope or Sage. I’m looking for whoever signed this.” She pulled an envelope out of her shoulder bag and rifled through it. While keeping a wary eye on Poe, she handed Rick one of the documents, and he scanned it quickly.

“You’re looking for me then.” Why did that make something in his stomach tighten?

“You’re the neighbor? You knew Gail Hinsdale?” A section of snow slid off the roof and landed in a pile about a foot away from the woman. She stumbled back and threw a glance all around her, almost dropping the envelope in the process.

“Come in,” Rick said, though he hadn’t remembered consciously deciding to invite her inside.

“Thank you.” She knocked the mud and snow off her boots and squeezed past him into the store. She smelled like grapefruit and coconut and sunshine. Like something far too exotic to be here with him. “Could you…” She motioned to Poe and made a shooing gesture with her gloved hand.

“Sure. C’mon, Poe.” Rick smacked his thigh and shuffled toward the kitchen behind the pastry case. He pushed open the door and guided Poe in. She whimpered on the other side when she realized he’d locked the door.

“I appreciate that. Wild animals unsettle me.” The woman pulled off her leather gloves to reveal long, slim fingers with nails polished a deep crimson.

“Right. Tell that to her teeth.” The woman dropped the envelope on one of the tables and unlooped the scarf to expose a slender neck. She turned in a tight circle to survey the store. What was she thinking? She obviously came from a place where the stores didn’t look like his.

“You knew Gail Hinsdale?” She leveled her gaze on Rick, then flicked a glance down to his ankle. “Do you want to sit down?”

“I think I’m supposed to ask you that.” He indicated the chair across from the one he currently had a death grip on.

She slid the chair out and sat on it, but just on the edge, not like she meant to stay for any length of time. This saddened Rick, because for the first time in his life, he didn’t have the urge to get rid of company.

He eased onto the opposite chair, and the muscles in his entire body relaxed as the pressure was taken off his ankle. The woman noticed.

“What happened there?” She peeked under the table.

“Snowshoeing incident.” He shrugged, determined not to explain any further though the woman waited a moment as if he might. “How is Gail? I haven’t seen her in a little while.”

The woman’s lips twisted down at the corners, and Rick had this ridiculous urge to scoot over to her side of the table and… and do something.

“I’m so sorry,” Rick said. “She was real generous with allowing me to tap her trees. Nearly doubled my productivity.” He had reaped nothing but benefits from his arrangement with Gail Hinsdale. One of the smartest, healthiest business moves he’d ever made.

“She left me the property.” The woman extended her hand. “I’m Lily Hinsdale.”

Taking her hand in his and noting how cold her fingers were, he said, “Rick Stannard.” He looked at the envelope again. “Are you thinking of moving to the property?”

At this, Lily let out a loud laugh. “Moving to Vermont? Are you serious? I don’t want to be here right now, never mind live here.” She brushed her hair out of her face with a shaky finger.

“What’s wrong with Vermont?” Rick asked. It was the perfect place as far as he was concerned.

“Umm, everything.” Lily stretched her magnificent legs out to the side of the table and peered down at her boots. Cringing, she knocked her heels together letting caked mud drop to the floor. “Vermont is no California.”

California, of course. That explained the tan and the fashion. And the disgust for mud.

“Vermont has a lot to offer.” Why did he feel the need to defend his fair state? Why did he want this woman to like Vermont?

“I’m sure, but I’m… high maintenance. Don’t have any real love for flannel or fleece. And don’t get me started about the woods.” She peeled off her coat revealing a fluffy brown sweater that ruffled at the collar and the wrists. Rick had never seen a sweater that fancy.

“The woods are the best part of Vermont,” he said.

“The woods are Hell.”

“I’ll bet I could change your mind about that.” Had he stepped out of his body? Who was this guy, talking to this woman, and actually picturing himself leading her on a hike in the thawing woods?

Lily regarded him for a silent moment, and for once, he didn’t like the quiet. What was she thinking? Probably that I’m the exact opposite of every guy she knows in California.

“No. I’m certain the woods and I don’t mix. Anyway, I’m here about the property, not to discuss the nonexistent finer points of this forgotten realm known as Vermont.” She brushed at her hair again, and the trembling in her hand was still there. Why was she so nervous? “I have a proposition for you.”

“Yes, I’ll buy the land from you.” He’d wanted to do that before Gail had constructed her fortress on the property, but he hadn’t had the money then. He had it now thanks to her letting him lease her maple trees and his barn-building business.

“Oh, umm, no. I don’t want to sell the property to you,” Lily said. “I want to sell it to another buyer and buy yours.”

Curious about Rick’s reaction to Lily’s proposition? Download MoreThan Pancakes, Book One in The Maple Leaf Series, for #FREE.    Amazon   Other Retailers 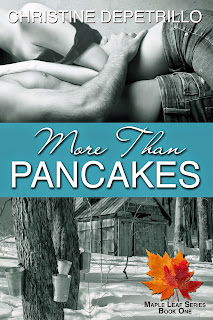 If you like it, review it. If you don’t like it, read it again. I’m sure you missed something.

And Happy Valentine's Day... you know, if you're into such things.

Christine, I went to college in Vermont! Tapping the trees for Maple Syrup was a big thing for us. By the way, is "Poe" in your story named for Edgar Allen Poe?

Great excerpt! I'm not a big fan of Valentine's Day either. My hubby and I tend to ignore it! He'll get me a card, but I'll forget...or vice versa. This year we both forgot! :-)

Angela, making syrup is like magic. I love boiling the sap in my big, black cauldron... I mean, pot. Big, black pot. And yes, Poe is named for Poe.

Leah, my husband and I never exchange gifts for any holiday!

It's been a lifetime since I've been to Vermont. Loved it. And loved your excerpt. I'm off to get the book now! And a review will follow.

Interesting excerpt. No way will these two ever get together. Right? **wink wink** A copy and eventual review coming up. PS what’s not to love about the woods?

I think we drove through Vermont once. Wish we'd taken time to explore, but little kids who'd been on a too long trip. That book is in my TBR pile. The excerpt makes me want to dig it out and read it.

I spent one summer and two falls living in Vermont. It's a beautiful state! Why do I think Rick won't be happy with her proposal... LOL

If you like it, review it. If you don’t like it, read it again. I’m sure you missed something.

Can I steal it?

Chris, these are such interesting people...nice 'show' in your excerpt...excellent hook at the end! Loved visiting Vermont last summer...absolutely breathtaking country. Love your book title, too...cute!

Boy, that's a sort of unromantic feeling about Valentine's Day for a romance writer! :-) . Good luck with the book--sounds great.

Thanks, everyone! I agree with Rick. I love Vermont! RE Mullins, steal away! LOL.

Awww, I SO want to visit Vermont!!! I'm not a big fan of Valentine's Day, but I don't harbor any anger toward the holiday, LOL. Really love your excerpt!