Where Book Ideas Come From by Jannine Gallant

Vonnie recently posted an entertaining story about a dream bear that sparked her Bear Shifter series. Alas, I've never had characters appear in my dreams to demand their tales be told. That got me to thinking about what does inspire my stories. First of all, my stories begin with a plot not a character. When I'm pondering a new series, my mind turns to that all important question: What if this happened? But how does an author get to this? For me, real life events can trigger that question. A couple of years ago, I was walking Ginger in the spring when the snow was starting to melt out of the woods. She took off as she likes to do and was digging furiously some distance off the trail. I yelled for her, and she finally came back with a long stick in her mouth. At least I thought it was a stick...until I noticed the hoof on the end of it! EWWWW doesn't begin to reflect my thoughts as I screamed at her to drop it. Some poor deer had been eaten by something (probably a mountain lion), and the remains had been buried by snow all winter. Of course my writer mind clicked into motion, and I couldn't help thinking: What if it was a human femur instead of a deer? Out of that notion, a scene from BURIED TRUTH was born along with the gruesome reason a person had been buried in the woods. 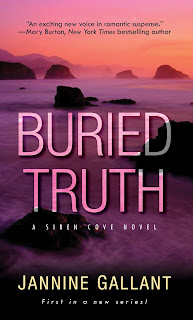 But that was only part of the plot--a crime that had happened in the past. Why would there be danger in the present for my hero and heroine to contend with unless the perpetrators of the old crime felt threatened? How could something that happened years before pose an immediate threat? Those were the questions I asked myself as I mulled possibilities. Something incriminating had to be found, something the guilty party wanted back. My mind did a few mental gymnastics, and I came up with the idea of a time capsule. What better hiding place for a roll of film with incriminating photos than in a time capsule that would be safely buried for the next hundred years? Except my heroine and her classmates decide to unearth their fifth grade time capsule after only twenty years and have a reunion party to reminisce over the contents. The plot to BURIED TRUTH was born.

I believe all authors have their own unique process for coming up with book ideas. Our minds work differently, after all. My characters evolve from my plots as I decide "who" would best fit into the suspense scenario. The "who" determines the romance plot to go with the suspense, and putting together the two in a meaningful way is how I form my books. So now you have it, a look into the scary place that is my mind! LOL

If you want to see what happens after that time capsule is dug up, pick up a paperback copy of BURIED TRUTH at your local Barnes & Noble or download the digital version at Amazon or Apple iBooks. For an exclusive prologue that shows the origins of the twenty year old crime, pick up a copy at KOBO. All links are also on my WEBSITE. Happy reading!
Posted by Jannine Gallant at 12:01 AM

Great story about Ginger and poor "Bambi's" femur! Weirdly, just the other day at a friend showed me a photo of his dog in the same situation! I looked at it and looked at it and finally said, "Is that a, uh...a deer hoof???" Yep, it was. Thanks for the peek into your thought process behind Buried Truth. It's next in my TBR stack and can't wait to start it!

Dogs do love bones, Leah. LOL I can’t wait to hear how you like Buried Truth!

My characters don't speak to me either. I've gotten a couple of names in my dreams, but no full characters. I decide on my characters and the broad overall premise of the story at the beginning of the process. Then I work to develop both the characters and the plot simultaneously. My plotting is a lot like yours, but I wish I were more wildly imaginative during the "what if" phase. (I'm glad I hadn't heard your bone story before I read Buried Truth. Ewww is right!)

The pursuit of a unique plot is all consuming...we always worry if our 'what if's' are pedestrian...maybe too simple or obvious. A mind like Vonnie's is a wonderful thing. No bear ever demanded me to tell his story, dang it! But Jannine, going from a deer bone to a time capsule is some leap...I'm impressed!

What a great post. Even though I am an author myself, I'm still fascinated with how other authors come up with their ideas. A lot of interesting 'behind the scenes' stuff for Buried Truth. Love it!

I love it when life's experiences lead us to a "what if" moment. I have one in process here and there, since I work on 3 or 4 at a time from a radio announcement over a year ago about a bracelet returned after thirty years. I've never come across a bone, if I do, you'll hear me scream all the way to your place. Great post!

Alison, it was pretty disgusting!

My mind is more capable of gymnastics than I am, Rolynn!

I think each book has it’s own unique beginning, Ally!

Thanks, Vonnie. That was Ginger’s most inspirational moment writing-wise to date!

I remember that femur. Eeeeeewwwww! Is right. As I keep saying, Ginger is one great little dog. Oh, and Buried Truth has a bit of Eeeeeeewww to it as well. Great read. Best of luck with sales and more sales.

I'm reading this right now, and how fun to know where you got the idea. And it was a great idea. Fun read!

Thanks, Brenda! I'm glad you're enjoying it!

Wow, what a find. I love hearing how a story originated. I can see your mind working through the process. I've had first scenes pop in my mind in that twilight before sleep. Then I have to figure out what to do with it.

Diane, I seem to do my best "what if" planning while I'm walking the dog!