The other day, I noticed this sign posted on a bulletin board near my husband’s office.


I wasn’t sure how or what, but I did know that would be the subject of my next post here. Then I figured it out…


My birthday was earlier this month. All in all, it was a pretty good day. The kids called with plans for a week end party, my husband bought me a sentimental card and took me out to a very nice dinner. Then he dropped a bombshell I wasn’t expecting. He wanted to buy me flowers, specifically a plant. I didn’t know what to say. Not because I was necessarily touched by his thoughtfulness, although there is that. The fact is, I was truly rendered speechless in an – oh, no, not again sort of way.


You see, I’m horrible with plants. Saying I have a brown or even black thumb doesn’t begin to do justice to the malady that afflicts me. Plants in my care have no chance of survival. Zero. None. Nothing. Nada. Zilch.


They may as well shrivel up and die before they even arrive at my house because, try as I might, that will ultimately be their fate. After so many years my husband knows this and yet he insisted. What else could I do but graciously accept? So off we went to find a suitable sacrifice…uh…specimen.


After some offers I absolutely had to refuse – temperamental African Violets, (it makes me shudder to even thing about raising those); fragile Boston Ferns, (the kind my mother used to grow en masse by the way) nope. Finally we settled on a Calla Lily. I had heard of them. This one was purple, my favorite color and seemed to be reasonably healthy (for now, anyway).  ‘Indirect sunlight, moderately moist soil and 60 to 70 degree temperatures’ to quote the full color instruction stick. The one which, by the way, also sported the picture of an entire, beautiful bouquet. 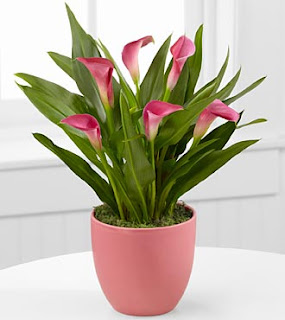 Easy enough, don’t you think? For normal plant growers, I suppose. Of which I am not one.
What’s indirect sunlight exactly? Either the sun’s shining down or it isn’t. Sun beams don’t shine from the side, do they? I mean, the sun would have to leave its position in the sky to do that, which isn’t going to happen. Sunlight, direct or not, there doesn’t seem to be a lot of middle ground on the issue. Sounds to me a little like being somewhat pregnant. Either you are or you aren’t. Again no middle ground.

But back to the fate of the innocent little plant of mine. The center of our living room, aka away from any and all windows seemed to be as indirect, sunlight wise, as one could get. This is where I set my treasure. Then I made sure the soil was moist, even added some extra water because we were going out of town for a few days. Just to be sure said soil really did remain ‘moderately moist’ while we were gone. When we returned, the leaves were getting a little pale, yellow even. Not only that, water sat, yes sat, about a half an inch deep, in the pan underneath the pot. Could this be the beginning of the inevitable end? Apparently my idea of moderately moist and their idea of moderately moist were two completely different moderately moists. We, that tiny instruction stick and I, had something else we couldn’t agree on.
In addition to that whole direct and indirect sunlight thing.
**heavy sigh**


At any rate, I’m trying to reform; I’m letting the poor thing dry out a little and moved it from the center of the living room to a shelf near a window in my office. A little closer to a window, but far enough away, I hope, from any and all direct sunbeams.


Fingers crossed these new arrangements will prove to be beneficial. Please send positive thoughts our way and wish both of us luck.

Skill wise, I don’t qualify to build either, but here’s hoping I can at least grow one measly little plant.

Email ThisBlogThis!Share to TwitterShare to FacebookShare to Pinterest
Labels: Calla Lilies, Fear not, Margo Hoornstra, The Roses of Prose

Oh Margo....I feel your pain! You and I have commiserated in the past about our mutual inability with plants. My version of "moist" is usually different than what the plants need too. I also recently received plants as gifts, but at least the gift-giver knew it would be touch-and-go for the plants she was leaving in my care. "Take them home," she said, "enjoy them, and then let them die as you wish." ;-| I took a bit of offense to the inference that I would purposely let anything die, but I couldn't fault her assumption. That was about a month ago. So far they're all still alive. The English Ivy (supposedly the hardiest in the bunch) is showing signs of feebleness though...droopy leaves and stems, a possible victim of over-watering, again. I might be giving it last rites soon. I will send good thoughts your way and hope that your Calla Lily continues to bloom and flourish in whatever sunlight you provide. :-)

My plants seem to do best with 1/2 cup of water every 2 weeks. I consider behind sheer curtains indirect sunlight. I have learned plants don't like to go without water the entire time it takes me to write a book--3 to 4 months. They get pissy about that and die out of sheer spite.

My mother's plants (in and out) are gorgeous. She tends them like pampered little children. I, on the other hand, am a true believer in benign neglect. Inside plants are watered thoroughly once a week. The African Violets get a weak fertilizer to keep them blooming. And I believe my flowers are equally gorgeous.

Oh, Leah, it's so nice to have a soulmate! I have turned myself inside out and sideways for plants so many times to no avail. Add to that, my son's girlfriend, who used to work at a greenhouse, gave me a beautiful daisy plant for Mother's Day. No pressure there! LOL

Love it, Vonnie! Thanks for the perspective. And my morning chuckle!

Benign neglect is the key for inside plants, along with drainage...plants shouldn't sit in water. But see, there's the rub...I keep forgetting when I watered them last. So I have a water measuring doo-hickey, maybe 20 years old and the battery still works in the thing. I stick the tines in the pot and if I get a gentle click-click-click, moisture exists. A fast click and I know I've overwatered. Hardly a click...water that puppy. Makes it easy to figure out when to water. I fertilize when I think about it...maybe two or three times a year. Truth is, I concentrate my efforts on my garden outside, and the California drought has challenged us the last several years. We've had some good rains this year, so we gardeners are relieved. My plum harvest this year will be phenomenal! Still, I have a couple spots on our half acre where plants refuse to grow, so Margo, I get your frustration because of those spots. Drives me nuts!

I have two indoor plants. I used to have three... Pat just re-potted the one he's attached to. It still looks okay, and I'm crossing my fingers for it. The other is one of those viney things that have long strings running forever. The leaves fall off closer to the main plant, and you drape the ends over to make it look better. Every few years I cut off all the trailing vines and let it start over. Apparently, you can't kill it no matter how hard you try. Plants run away when they see me coming, too. Best of luck to yours!

RE I love African Violets. That's why I leave them alone. ;-) Envy those, my mother included rest her soul, with green thumbs.

I can soooo relate! I am a serial plant killer. I've even killed a cactus. I admire your efforts. Good luck! :) (And thanks for the laugh, you cracked me up!!)

As Rolynn said, benign neglect. That's my motto, too. Outdoors, my plants thrive. Unless the rabbits eat them. (One of these days, I'm going to play Elmer Fudd with the gun. Pesky wabbits.) Good luck, Margo. That's a very pretty picture. Maybe you could tape it to the side of the planter so everyone will know what's the plant is supposed to look like. :)

Rolynn. Good advice. Thank you. It's tempting to blame the soil, but our lot is in the middle of some farms that produce marvelous crops. Can't be that. **heavy sigh**

Jannine. So Pat's the plant talent in the house. I see. Can't imagine what it is you grow that can't be killed. But I want one!

Ally! Soul sister! I once killed a cactus too! One of those Christmas ones. Mine never had a chance!

Thanks, Diane. Dried blood. My mother swore by it around the perimeter of the bed. Love your tape the picture idea. Made me laugh!

Margo, we must be made of the same stuff. Was recently given--very generously--an orchid plant. You may know the sort, cost a bomb and seem to be in doctor offices everywhere these days. Easy to look after: indirect sunlight, ice cubes once a week on the moss. Ho ho! My daughter went in to check on it while I'm away, found 3 dead flowers, several yellowing leaves. She played Debussy to it and it seems to be doing better.
I may also be the only person who's ever killed an Aspidistra

I'm sorry, Margo, but LMAO. I have one word for you - A word I found after finally admitting I'm a serial plant killer - SILK!