How to Creatively Stalk, Maim and Murder by Jannine Gallant

With a title like that, I'm sure I'm now on some government watch list...LOL But seriously, people, when you write romantic suspense, the well of creative options to do away with the protagonists begins to run a little dry after a while. Especially when you write series. You can't have stalker #2 use the same old methods as stalker #1. And by the time I get to stalker #3, my brain feels like cold oatmeal...and my ideas are just about as appetizing.

My latest release, EVERY VOW SHE BREAKS, is the third in the series. In the first book, my stalker was fairly traditional in a creepy watching from the shadows sort of way with a couple of attempts to grab the heroine and a kidnapping to round things out. In the second book, my villain was an assassin with a personal vendetta against the heroine. Point and shoot was his motto. But his twisted mind added a whole new level of creepiness... Then came the third book. What to do, what to do? The villain believed the heroine broke a promise to marry him, so he became my wedding stalker. He leaves her weird wedding paraphernalia. Party favors. Wedding decorations. Cake toppers. Honeymoon lingerie. Until frustration takes his game to a whole new level of scary... But I'll let you read the book to see what he does next. 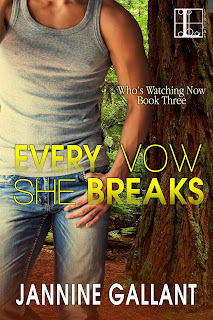 The point is, new and creative ideas are hard. I'm currently writing the fourth and final book in my BORN TO BE WILDE series. In the pursuit of endless torture through three books, I've used the obvious (gun shots, poisoning, and cut break lines) and the dramatic (drowning, a fall from a cliff, and a downed private jet) and the increasingly creative (buried live power line and iced over steps). With book four, I've been feeling a little desperate because the goal so far has been to injure, not kill. I came up with a chisel hidden in the hay where my hero actor was literally rolling during a love scene. Then there was the shard of glass under his horse's saddle, and next... I wanted something disfiguring. The creative well of ideas had run dry. I asked my CP. Sorry, Margo, but you weren't any help. I gave up on my sketchy outline and wrote "Attempted disfigurement." Then I wrote right up until the scene needed to take place and added some stalling filler, then had my hero go take a shower... Light bulb! The villain put drain cleaner in his shampoo bottle. Good thing my hero dropped it and spilled it on his foot before he poured it over his head. Whew! What a relief! Mind you, I still have one more mayhem scene (attempted murder this time) to come up with for this book. I want something intended for the heroine that happens to the hero instead. On a movie set would be a bonus. Go ahead...make my day. Give me an idea. LOL It has to be creative, though.

So, what's the most interesting way your bad guy has tortured your hero or heroine? Maybe I'll steal your ideas. Kidding! Sort of...

To find out what the wedding stalker's final move is in EVERY VOW SHE BREAKS, buy your copy at Amazon, Barnes & Noble or Apple. Visit me at my Website.
Posted by Jannine Gallant at 12:01 AM

Email ThisBlogThis!Share to TwitterShare to FacebookShare to Pinterest
Labels: Born To Be Wilde, creative murder, Every Vow She Breaks, Jannine Gallant, The Roses of Prose Where Romance is Never Out of Season

Funny, Jannine! I can get pretty gruesome in my mayhem scenes. I'm not sure you'd want any of my ideas...especially since I'm writing this at 5 a.m. and am still half asleep! :-) I loved your "Every" series and am looking forward to the "Wilde" bunch. I know you'll come up with something fantastic to keep the pages turning.

I love drones. The smaller the better. The government is using some as small as flies and birds. The more capabilities added--GPS, facial recognition, cameras, poisonous gas--A-HEM--the larger the creature. You can put facial recognition software and a tube of poisonous gas in a drone that resembles a pigeon or raven. Then have the bad guy fly it over the intended victim. Hey, if the government can do it in other countries, why can't we in our books? For research, I've watched shows on this topic on PBS and Netflix and googled the heck out of "how are small drones used."

Oh sure. No pressure. For the record, folks, I did provide a few ideas that were...politely rejected. Let's face it, Jannine. Your mind is by far more devious than mine! That's just how it is. Okay, in my books - a random gunshot that turns out to not be random (too cliché?), a rigged bannister that gives way three stories up, the heroine run down when 'the accelerator stuck!' on someone's car. As for the next disaster to befall your hero but meant for the heroine instead, picture this! On the movie set, a live shot of unloading some new wild horses, or one horse, if you must - the heroine's forte - using, maybe her father and grandfather. The movie company will shoot it all and use whatever they can. The horse trailer has been rigged - the door swings free before they're ready. She's trying to avert disaster and is succeeding when the hero panics and rushes in to save her. He gets knocked down, stepped on (by the horse(s) of course. Okay - in front of everyone - reject this! LOL

Great post, Jannine, and I love this series. So enjoyed books one and two. I, too, kill people off and the way is not so important as the type of villain. Mine have run the gamut from distinguished college professor to nutty young guy to Nazi beauty. And you sound like me...it's fun!

Jannine, you have a twisted mind. LOL Isn't that what we (who write suspense and mystery) all have? Your methods are far better than mine. Best wishes on finding the perfect way to bump someone off.

Leah, I'm so glad you enjoyed the last series! This new one reads more like adventure romance than romantic suspense. A whole new sub-genre?

Vonnie, drones sound very, very cool, and I'll keep them in mind for future books. This villain isn't that sophisticated, however.

Margo, sorry, but the final attempted isn't at the ranch. It's after they've returned to Hollywood. But great idea, and I appreciate your effort!

Brenda, I try to keep my villains new and different, although I always worry the clue-dropping is heavy-handed in places. Such a fine line to walk when you want to keep their identity a secret. The one for this book should be a surprise--I hope!

Diane, thank you! Being told I have a twisted mind is a great compliment! LOL

Your stalkers totally creeped me out! I have a very mundane mind, so the most unusual thing that happened to my hero in Unwritten Rules was being shot with an arrow. You are so right - creative mayhem is hard! After I finish my current book, my next series is going to be closer to straight contemporary romance. I don't plan for anyone to be attacked - at least not at this point. But you never know. LOL

Alison, sometimes I think straight contemporary is easier because you only have the romance plot to keep moving and not romance and suspense plots to coordinate together. But, for me, that actually ends up being harder because there isn't as much material to work with. So, I'll probably keep writing suspense even though my mayhem ideas are fewer and farther between...

Jannine, I'm in the throes of the same problem...how does my heroine overpower two men? When I'm in trouble, I usually ask my husband for an idea. He always suggests "a Nazi is chasing her over a cliff and she..." When I can get him to think more creatively, he'll try...and usually I can use something he comes up with. For your scene...movie sets us fake pyrotechnics...maybe they are real this time? Or some stunt is set up without the needed cushion at the bottom of the fall?

Good ideas, Rolynn. I'll give the possible situations some more thought... As for your heroine, does she know martial arts?

(Slavic accent) Interesting. Very interesting... heh heh heh
I thought that might give me some idea but it hasn't. That's why I don't write suspense I guess. Good luck, though.

Jannine thanks for the thought. My heroine is FBI, so she is well-taught in self defense. But the UNSUB has her on ketamine, so she's definitely not in full fight mode. Geesh-what we do to our heroines!

Thanks for trying, Andi!

We love to torture them, Rolynn!

Ha, I love this post, and having a twisted mind as well, your methods thus far really appeal... :) Hmmmm, my suspense aren't usually stalker-related. I often have victims other than my heroine. I've had my villains use a lethal snake...I'm trying to think of other unusual injure/kill methods, but my brain isn't working right now. On a movie set, there should be plenty of opportunity. I just can't think of anything other than what's been mentioned. My goal is usually to try to add twists and keep the villains identity a secret. I don't worry as much about unique methods for killing. But a stalker, yes, you'd have to change that up a bit. Good luck, I'm sure it will be brilliant!

A snake is really creepy, Ally, especially since I'm not a fan of slithering creatures. I'll have to keep that in mind for future reference. Or maybe a spider...or an alligator... Lots of great options! LOL