TELL A BOOK BY ITS COVER? by Brenda Whiteside 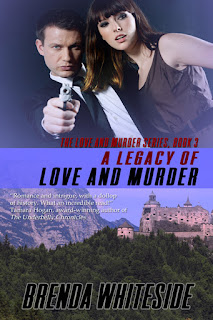 My last post concerned having a tough skin as an author. In particular, I lamented someone commenting negatively about my latest release, A Legacy of Love and Murder. This is the third book in what will be a five book series. I’m here to update what I did about this problem (from my last post):

The cover has a swastika. I thought my cover artist did a great job. To me, it spoke to the suspense and danger of the book. Apparently, this might not appeal to some readers. Truthfully, only one reader told me it didn't appeal to her even though she loved the first two books. She won't read it. Only one...but if one, then there could be more who feel that way.

I checked sales for the first two months of each of the first three books in the series. Whoops. I could only conclude the cover was an obstacle. After further research which consisted of asking for some input from other writers, including an organization I belong to, Sisters in Crime, I decided to take my concerns to my publisher, The Wild Rose Press. They listened, they pondered for a very short time, and bam! I had a new cover and an improved blurb.

The story is the story, and I’ve gotten great reviews and comments…I just had to get those who tell a book by its cover to open that cover!

Blurb:
In Austria to meet her great-grandfather and explore his castle estate filled with priceless art, August Myer arrives to find he’s died suspiciously. As one of the heirs, her life is in danger, turning this fairytale Alpine adventure into a nightmare of veiled threats, unexplained accidents, and murder.

When August learns the handsome inspector is concealing a personal involvement and the death of her great grandfather is somehow connected, she takes the investigation into her own hands. The outcome could be the death of both of them.

Buy Links:
Amazon
Kobo
ARe
The Wild Rose Press
Posted by Brenda Whiteside at 5:00 AM

Email ThisBlogThis!Share to TwitterShare to FacebookShare to Pinterest
Labels: A Legacy of Love and Murder, brenda whiteside, Love and Murder Series, romantic suspense, The Roses of Prose

I'm glad you were able to make the change, Brenda, since the original cover was negatively affecting impressions of the story for some. It didn't for me, but everyone is different. The new cover is great, too! And so is the new blurb. Wishing you much success with the book!

Me too, Leah. Let's hope it makes a difference. Thanks.

Hi Brenda, I wouldn't have considered the first cover offensive. It's great that The Wild Rose Press took your concerns seriously and made the change. I do like the new one.
Barbara

I love the new cover. It has a James Bond feel to it. Very cool!

Good for you, Brenda, and it's still a great cover.

I have a confession to make. I once bought a book by one of my favorite authors and it sat on my shelf for almost a year because I hated the cover. It was the color of Pepto-bismol. However, your cover is great and I liked the first one too. Good luck, Brenda.

Good job, Brenda. Glad that Wild Rose listened and acted. I think covers are as much a 'preference' category as the genre of a book and 'voice.' Heavy sigh here....we can't please everyone!

Love the new cover, but then I loved the first one, too. I enjoy that period of history and read a lot of non-fiction regarding that era, still trying to wrap my mind around how a man, who'd been a failure at everything he'd tried, could in such a short time be the party head and supreme ruler of Germany. I read it, but the human in me can't fathom it. So a swastika would only have peaked my interest. However, we all have our interests. I love a book cover with flowers, too. But my reading tastes run more to the steamy side, so any flowers in the books I read are scattered on the sheets. By the same token, I'm not always thrilled with the ripped, naked chests my publisher gives me, although I do get a choice between models. Yes, the reflect the heat level in which I write, but it's a style that's overdone. Back to your bookcover, I hope the sales reflect the changes.

Brenda, I'm so glad TWRP listened and changed the cover and blurb. Visual images evoke strong visceral reactions in readers/viewers for many reasons, and you want your first impression to be a good one. I really like the new cover (something about the male model on the old cover disturbed me). I hope you'll see a big change in your numbers!

Well done, Brenda. I'm thinking of approaching them on one of my covers which doesn't seem to be selling. Glad to know they listened.

I'm glad you were able to solve your cover problem, Brenda, and how helpful TWRP was.

The new cover is fabulous! I didn't have an issue with the old one, but I can see how some might. TWRP is a wonderful publisher, always trying to please their authors, aren't they? Congrats...best wishes on sales!

Sorry I've been absent. Sitting in an IHop and hope they don't kick me out too soon. I've been off the net for a few days and tons to catch up.

Thanks for all the comments. Vonnie, I never wanted people on my cover in the beginning because of the typical romance models. But the readers want them, so I caved.

Yep, Alison, the other model was the best my cover artist could come up with at the time. This time around, much better!

Andie, be prepared. If it's an older book, you'll have to sign a new agreement to extend the rights another 5 years...if they agree to change it. That's what happened with Sleeping with the Lights On.

Late I know. Just got back in town. Love that cover! Very cool! How great is it that TWRP listened to their author. They are a great publisher!

They are very easy to work with, Margo. Thanks.