I think I have pretty tough skin. My stint as an office manager/scheduler for a swimming pool company gave me the first layer of toughness. You can't imagine how irritated and rude people can be when it gets hot in Phoenix and they're waiting for their pool to be finished. I was the first level of contact AND the crew scheduler. I got all the grief.

Skip ahead quite a few years to my current status of author. The skin better be good and thick to handle critiques of your work, bad reviews, and comments that hit below the belt concerning your creations by people who don't even know they're swinging at you. Okay, that was rather long and convoluted. Let me explain.

I'm three books published into a five book series. Confession here...when I wrote book one, I didn't actually think about the series angle enough. I set book one and two in Arizona, but because of the story in book one, book three takes place in Austria. Kind of wacky, but I went with it. It involves the neo-Nazi movement too. The cover has a swastika. I thought my cover artist did a great job. To me, it spoke to the suspense and danger of the book. Apparently, this might not appeal to some readers. Truthfully, only one reader told me it didn't appeal to her even though she loved the first two books. She won't read it. Only one...but if one, then there could be more who feel that way.

Where is my self proclaimed tough skin on this issue? I'll admit, I'm bothered. What can I do about it? Not much now. I do keep wondering, are there others who are missing out on what I think is one of my most involved plots and story to date because of my setting and villain choice? Jeez, I just don't know. 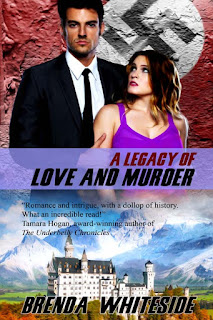 In Austria to meet her great-grandfather and explore his castle estate filled with priceless art, August Myer arrives to find he’s died suspiciously. As one of the heirs, her life is in danger, turning this fairytale Alpine adventure into a nightmare of unexplained accidents, neo-Nazi threats, and murder.

When August learns the handsome inspector’s involvement with a major female Nazi is more than he’s admitted, and the death of her great-grandfather is somehow connected, she takes the investigation into her own hands. The outcome could be the death of both of them.

A Few Buy Links:
Amazon
The Wild Rose Press
ARe

Email ThisBlogThis!Share to TwitterShare to FacebookShare to Pinterest
Labels: A Legacy of Love and Murder, brenda whiteside, romantic suspense, series, The Roses of Prose

I enjoy reading about the era in history. Probably because I can't believe a man who was a failure at everything he tried could rise up and lead a country of hard-working people like the Germans into a horrendous war. Calvin calls it mass hysteria. I simply can't wrap my mind around it. So, your book cover appeals to me. I'd buy the book based on that alone even if I didn't know how good your writing is. The woman who spoke up may have had relatives directly affected by the war or the Jewish extermination camps. Let's hope that's the case. As for thick skin, YES, we all have to grow it. Please note I've had no coffee yet so Lord only knows what I just wrote.

Keep doing what you love doing, Brenda, and do it well. Too bad you lost a reader, but everyone's entitled to their opinion. Best of luck as your series continues.

Me too, Vonnie, but apparently my cover can turn off others. And of course there is my boo boo in not keeping the series consistent. Newbie mistakes.

Thanks, Margo. I'm watching this one to see if the trend continues. Like I told Vonnie, newbie mistakes.

As an author who killed her heroine of the first book in a series (it was between books and they were based on a historical character), I can relate to author backlash. I had more than a few readers who said they'd never read the second book (where the hero, struggling with his terrible grief, finally falls in love again). I also had some readers who swore they'd never read another book by me again. Did it hurt my career? Maybe. But there wasn't any way I could change things. That's how the story evolved and without that book I couldn't have written the two other books in the series.

To leave the country was a bold move on your part. Celebrate your courage and don't stress over "the one that got away"! If you've got a five book series going then you're doing OKAY. Enjoy the journey wherever your wonderful characters take you.

You'd think the publisher would have nixed the swastika if they felt it would turn off readers. I agree the blurb makes it clear your H&h are anti-Nazi. Hopefully readers will read the blurb before making a judgement call. The blurb is terrific and should draw readers in with the promise of a great plot! If you do get more similar comments, you might want to take your concerns to the pub/artist. She could easily remove the swastika from behind them, and resubmit the cover. But it would take away from the drama of the image.

Well, Brenda, their loss. You are a fab writer. Sometimes, these things happen. I agree with Jannine about a terrific blurb to entice the reader.

I agree with Vonnie's thought that the reader might have had relatives in concentration camps. If at all possible, I'd try to get the cover changed. Just my 2 cents.

Brenda, my dear, all you have to do is watch the the GOP mess to understand...or should I say, not understand what is in the minds of some folks. When a big chunk of our population believes aliens have abducted people... You do your best work and give the best advice you can to your cover artist. The blurb makes the story clear to me. Onward and upward!

Frankly, that never occurred to me, but I knew what the story was about by the time I saw the cover. Looking at it objectively now, I can understand how a reader might react negatively to the swastika. I also wonder if some readers who don't read the blurb might think it's a WWII era historical. As Rolynn said, it's impossible to get inside the minds of some folks out there.

Brenda you know very well you have to ignore the nasties esp if only one speaks up like that. Good luck with the book
Andrea

Like Vonnie, I enjoy reading about the WWII era, and the threat of neo-Naziism is a compelling plot line. I think it's clear from the cover that there is some anxiety going on. This sounds like my kind of story. I'll check it out!

I sure hope you're right, Mary. Thanks for the input!

Yeah, Jannine, I've been thinking along the same lines. It's so odd because this is my favorite cover of the series.

Diane, it's a thought but I'm going to watch my numbers for a while longer.

Rolynn, funny, but how true. It's jungle out there, kiddies. And the monkeys are wild.

Alison, this particular reader said she read the blurb. I'm at a loss!

Thanks, Leah. Maybe I'm overreacting but still going to stay alert for feedback.

Hi Brenda. Your post hit home with me today. As far as your cover goes, I did not find it offensive. In fact, I felt the opposite. I was engaged - drawn in by the girl's expression and the man's steely front. The background was the icing on the cake adding a little more mystery. I want to know more - which is exactly the response I'd want from someone looking at my covers. For my covers I chose a lone cowboy and on the other a cabin under the northern lights. I love them both and thought them to be a perfect setting for romance. Not quite the same feedback I received. One reader was upset that my characters shared an intimate moment. Though the scene was far from explicit, my takeaway was that perhaps my covers aren't quite romantic enough. Or maybe I also need a tougher layer of skin. Best of success on A Legacy Of Love and Murder. I look forward to reading it.

Yes, it's difficult to maintain thick skin, but we have to try in our business. I love the cover and the blurb. I think people today can be a bit oversensitive. Yes, the swastika represents a horrific period in history, but it DID happen, and the swastika exists, so it will be seen from time to time. That shouldn't take away from the interest in your book, but then, we can't control how others feel, right? Good luck, my dear!

I think your book sounds fascinating, Brenda. Sorry about the craziness you are experiencing.

You know what they say, Brenda. You can't please all the people... The blurb makes the issue plenty clear but like Jannine said, if you feel the complaint isn't a one time thing, bring the issue to the pub.

Devon, your reaction to my cover is how I felt about it when I saw it. Don't we wish we were all like us? And, yes, the sizzle factor can surprise a reader if the cover doesn't tell the tale...I guess. With romance, I kind of expect of intimacy. Readers can can sure surprise us! Good luck!

Thanks Alicia and Beth.

Mackenzie, I did just that last night. Waiting for a response.