A Demon in the Newspaper by Karilyn Bentley


Please welcome Karilyn Bentley to The Roses of Prose. Take it away, Karilyn!

News stories are great sources of ideas for authors. Often a true story lends itself to being changed into a fictitious one, especially if the true story is somewhat of a mystery. By mystery, I mean the motivation for the crime is unknown. That's when my overactive imagination steps in, especially when plotting for my Demon Huntress series. How so, you ask? My series is an urban fantasy starring Gin Crawford, the world's latest demon huntress, and her adventures to solve crimes committed by demons and their minions.

Okay, you say, but how does that relate to newspapers?

One day I was flipping through the newspaper when I came across several stories about normal people who, suddenly for no apparent reason, went crazy and tried (or in some cases succeeded) to kill others before killing themselves. Their families were left wondering what happened since the behavior was out of the norm for their loved one. There was a string of these types of crimes in my local newspaper over a short period of time and my little writing brain went, ah-ha! What would happen if all those crimes were due to demonic influence? And what would happen if a down-on-her-luck ER nurse had to discover the real reason for the crimes? From that idea the Demon Huntress series was born!

Have you ever had a brainchild from reading the paper? What was it? Read on for my brainchild, aka the blurb and excerpt for the second book in the Demon Huntress series, Demon Kissed. 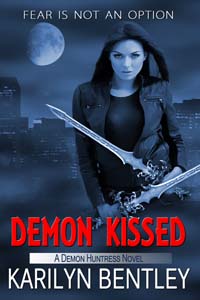 Blurb:
Gin Crawford, the world's latest demon huntress, has no time to mourn her dead lover as she's called in to determine why a demon attack occurred at the local medical school. And not just any demon, but the one demon that gives her demon-killing bracelet the shivers. A dead professor, a lab full of missing anthrax, and a demon who turns good people into minions complicate her life. Can Gin and her mentor Aidan Smythe solve the mystery of the missing anthrax and the identity of the demon before someone else dies?

Excerpt:
The scent of sulfur hangs in the air like a demonic stink bomb. I want to slap a hand over my nose, but no one else seems affected by the stench. Must be a demon huntress thing.
“Justitian,” Smythe mutters. “Not demon huntress.”
“If you don’t like my new title, then stay out of my mind.”
He glares. I swallow. Cross my arms. Refuse to take a step back. I’m learning not to be intimidated by his anger. Go me.
My justitia vibrates, throwing me out of my internal battle, pulling me back to the land of death and minions. The blob of colors pulsates, a glowing reminder of a moment of terror. The moment the demon appeared to the grad student.
Granted, I’m still taking Demons 101, but I thought demons formed minions in private.  Usually after the human committed a crime, not before. A tryout, so to speak. And maybe that happened, but it sure seems to me like the black blob of demon force appeared to the grad student smack in the middle of the hallway.
Or maybe that always happens, and I just now noticed it.
The justitia’s vibration grows stronger, trembling my arm, my veins. Not its normal excited tremor upon seeing a minion or demon. A rush of images spikes through my mind, scenes of terror coupled with blood and death, memories of the justitia’s former wearers captured in time by the entity in the bracelet.
I’m not the only one freaked out by the colored blob. How bad was this demon to scare a justitia?


Karilyn's Bio
Karilyn Bentley's love of reading stories and preference of sitting in front of a computer at home instead of in a cube, drove her to pen her own works, blending fantasy and romance mixed with a touch of funny.

Her paranormal romance novella, Werewolves in London, placed in the Got Wolf contest and started her writing career as an author of sexy heroes and lush fantasy worlds.

Karilyn lives in Colorado with her own hunky hero, a crazy dog nicknamed The Kraken, and a handful of colorful saltwater fish.

Glad to have you with us. Your book sounds great and I wish you a lot of success with it. And, yes, it's amazing where authors find their inspiration but I haven't read an actual newspaper in years.

Happy to see you here, Karilyn. I've gotten several ideas from the news (TV or paper). You reminded me of one I'd forgotten about. When I was young, we would ride the Boblo boat to an island in Lake Eire not far from Detroit that had an amusement park. It closed in 1993. An abandoned amusement park. Wouldn't that be a great setting for a mystery?

Hi Karilyn, I have a file of articles I've saved since they tickled my imagination. Your series sounds wonderful. I am checking it out.

Welcome and thanks for the interesting read. Very creepy excerpt! Well done. Best of luck with your series.

Re Diane's comment, I used to travel to Boblo Island too. Now abandoned? There has to be a story in there somewhere.

Our area is pretty small and lacks sensational news, I'm afraid. Lost hikers/skiers are usually the only mystery until search and rescue finds them. Could be interesting to use that for a story, though, if the reason behind their disappearance was something other than lacking a sense of direction... Thanks for visiting and making me think before I finished my coffee, and best of luck with sales.

Welcome, Karilyn, I love the blurb and creepy excerpt. The pathway your inspiration for the series took made me grin. Authors have such interesting imaginations. Best of luck, sweetie.

Hi All! Thank you for stopping by! R.E.: I used to read the newspaper all the time but we recently moved so it's all online articles now. :)

Diane: I have never been to Detroit, but an abandoned amusement park sounds like a great setting for a scary story or mystery. Definitely a story I'd check out!

Barbara: Aw, thank you! I'm glad you enjoyed the excerpt and hope you enjoy the book!

Margo: Thank you!!! As I told Diane, that is a creepy setting for a story!

Jannine: Thank you! Glad I could help with new thoughts! :)

Mackenzie: I'm glad you enjoyed the excerpt and got a grin out of my inspiration! Thank you!!

Sorry I'm late! Loved learning about your inspiration for your series. Very cool idea! I've often thought about that, too, what makes a person suddenly go so off the rails as to murder people, especially their families? Sounds like a great series!

I'm late as well! I work at a daily newspaper in my "other" job, and I often think how true life IS stranger than fiction. The phone calls I pick up for the newsroom "tip line" are even stranger than what makes it into the paper! Love the premise of your book. Best of luck with it!