It’s funny how surprises happen when you least expect them, and how one opportunity can roll into more. And not just in personal life. My writing life has been crazy busy since hitting the ‘lists’ this past February, which all started when I was given the opportunity to join 11 wonderful western authors in the Cowboy 12-Pack. I’ve been going from one deadline to another, with several conferences in between.

The reason I was at RT in Dallas this past May, was because the boxed set had made the lists and caught the attention of Kathryn Falk. She asked us all to attend and consider writing another one. At the welcome breakfast, she called us up on stage to announce our next boxed set, the 12-Alarm Cowboy Firefighter set.

Bless the readers, they were thrilled, and it showed in preorders and sales when we released August 4th, because we just hit the NYT Bestseller's list at #13, and the USA Today Bestseller’s list at #31 this past week! 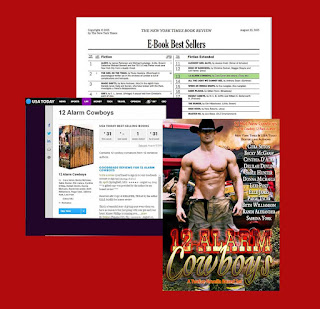 One opportunity, led to another, which led to another. I’m still happy dancing! J And now, it’s leading to our 3rd boxed set of cowboy novellas, this time they will be ‘law’ themed and due out in the spring of 2016!
Then, this past June in Las Vegas at the Romance Novel Convention, I was finishing up writing that cowboy/firefighter novella—Her Volunteer Cowboy—when the wonderful Cat Johnson messaged me to ask if I’d be interested in writing a SEAL novella for her Hot SEALs Kindle Worlds!!

Holy smokes! Not only was I honored, I was also thrilled because this was a fantastic way for me to release my military romantic suspense series—Dangerous Curves.
I had the first book nearly finished and sitting on my hard drive for two years. All I had to do was write a novella that connected that book to Hot SEALs KW. Of course I said yes! The incredible opportunity to write in Cat’s world, also gave me the opportunity to launch my new series, and expose my novella, along with the pre-order of the story sitting on my hard drive, to readers of that genre.
Again, one opportunity lead to another.
Knight’s SEAL/Dangerous Curves Book 1/Hot SEALs KW
Crossover Novella
http://www.amazon.com/dp/B013CGXEKG 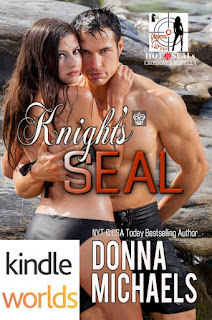 Navy SEAL Sam ‘Excel’ Gentry barely has time to consider his buddy’s job offer to join Guardian Angel Protection Service when a commander from their past, with his own D.C. based agency, asks for help. Owing his life to former Commander Jameson Knight, Sam is eager to help retrieve a mutual friend from a dangerous cartel, until he learns the operative assisting him is Knight’s oldest daughter, Lisa—Sam’s former lover.
Elisabeth Knight has waited over eight months to get into the field, and just her luck, her first mission hits close to home in more ways than one.  Not only does it involve rescuing her friend, a former NIO like herself, but her father assigns one of his former SEALs to assist—the one she’d given her body and heart to five years ago. Sam had walked away when he’d realized who her father was, and she let him, not wanting to see the sexy man shot, or worse, assigned to Antarctica…permanently. Completing their current mission isn’t the issue, the danger lies in their inability to fight their resurrected attraction and keeping that failure from her father
LOCKE and Load/Dangerous Curves Book 2
http://www.amazon.com/dp/B01343DV3C 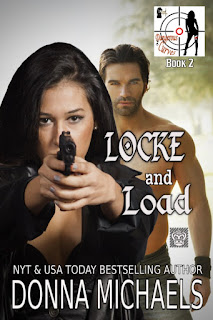 Former Naval Intelligence Officer Lt. Nicole Locke’s assignment to assist in a murder investigation, puts her face-to-face with the only man she ever loved—the man she was forced to jilt in order to save his life.
Det. Cage Burnett vows to do whatever it takes to bring down his partner’s killer, even work with the woman who crushed his heart four years earlier when she left him for another man. The dangerous investigation rekindles their desire, but when someone from Nikki’s past reappears and threatens Cage’s future, once again, Locke is loaded with determination to keep the man she loves alive.
There's more.


At the end of July, I attended the Author/Reader Con in New Orleans, sat on a suspense panel, due to my upcoming SEAL story, hosted a Cowboy party because of the 12-Alarm boxed set, and was a finalist in the BTS eMagazine Red Carpet Book Awards because of my contribution to the original Cowboy 12-Pack.
See? Life is full of opportunities and surprises. J The biggest surprise being the three Awards I took home that weekend:
Her Uniform Cowboy won 1st Place for Best Romance & 2nd Place for Best Book of the Year! 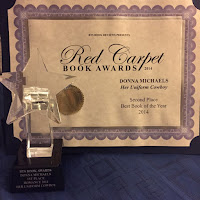 And Her Forever Cowboy surprised me with Honorable Mention for Best Romance! I had no idea it was even close!
~~*~~*~~*~~
Please let me take this opportunity to thank my readers for helping to make this year a great one for me and my books. Without you, none of those would’ve happened, and I am truly grateful. <3

Thanks for reading,
~Donna
Posted by Donna Michaels at 1:30 AM

What a whirlwind, Donna. Just proves good writing produces good results. May you have many more years like this!

I'm breathless, Donna! The whole boxed set thing is taking on a life of its own. I'm convinced it's a great way to collaborate with other writers, improving our craft overall. Happy sales to you!

Donna, so happy for you and proud you're part of our blog!

Thanks, Rolynn! You're right. Collaborating in a boxed set is a great way to stretch and learn, especially when the other authors are as established as the ones that approached me. I've been very lucky. :-)

Thank you, Brenda! I'm very happy to be on this blog, and grateful!

I'm just bummed that the one boxed set I'm in with you didn't do squat thanks to TWRP slapping a $7.99 price tag on it! I'm thrilled for you...and totally agree about the domino effect. I tried to get my pub to move up my release date for the 3rd book in my series to take advantage of the momentum I had going last month. They said no, so now I'm on the downhill slide. Sigh. You really do have to be ready to take advantage when you get a break, and that's what you've done so well. Some people might call it good luck, but I know better. You're a smart business woman who made the most of each opportunity. Kudos to you!

Wow, what a year, Donna. I'm breathless just reading about it! My one experience with a boxed set was a dismal disappointment. The publisher combined several old releases, set a very high price, and then did no promo at all. The results were exactly what you'd expect. Your experience has been the perfect combination of strategy and serendipity. Congratulations on turning opportunities into successes!

What Jannine said - there's a whole lot of hard work that goes into those "breaks"!