Vacation Was Nice, But Back Home Has Benefits Too by Margo Hoornstra

We just got back from vacation at the lake. Lazy days filled with sun, sand, beautiful blue skies, and more. 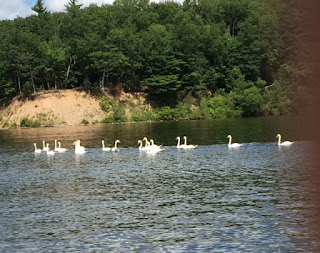 It did rain once. Driving, sheeting rain that lasted all of about a half an hour. Then we were treated to this. 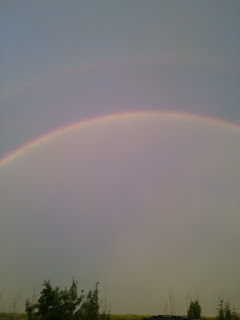 Too soon, Sunday arrived and it was time to leave. To see what had gone on back home in the yard while we were away.

I'll be the first to admit I'm not much of a gardener, so I wasn't expecting much. Most plants fear me, in fact. As they should. It's not that I neglect them on purpose, it's just that...I don't know. That's just the way it is. As it turned out, the vegetation did pretty well on its own. Hmmmmmm. So noted.

Thanks to some rain showers back home, my petunias on the porch thrived without me. 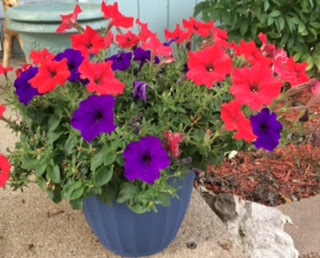 One of the tomato plants grew so large it toppled over, cage and all. 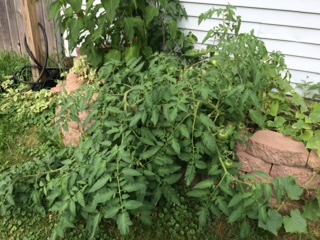 My patio garden did okay too. 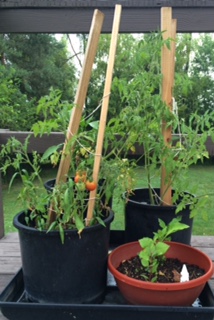 Plus, could it be? A single tomato actually had ripened to red. Hallelujah! Then I looked at the plant beside it and lo and behold there was a fully developed green pepper. Hallelujah times two! A cherry tomato and pepper to match. 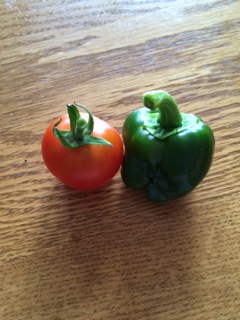 Vacation was nice, but it's good to be home. 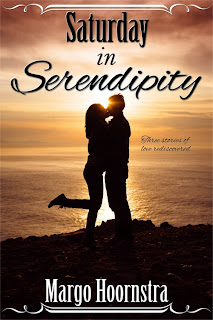 Three Strikes Thursday: Barry Carlson could have any woman except one. Amanda Marsh is happy—until Barry slides back into her life. Can they put aside old wounds to find love?

The solution was simple. Get out of the car, walk up to the house and ring the bell. Apologize for the intrusion when her father came to the door, and ask to see Amanda.
Only for a couple of minutes. Please.
Then he could fall all over himself telling her how sorry he was.
“Yeah that’s gonna fly.” His whisper filled the emptiness around him, and he dropped his head. “Face it, asshole. You blew it.”
In an odd way, talking to himself, he didn’t feel quite so alone.
He turned his gaze back to stare at Amanda’s window. The shade was still down. Her light was out.
So that was it.
Moving like a rigid, soulless robot, Barry put the car in gear and drove slowly away. Picking up speed as he left Amanda’s subdivision, he floored it once he hit the highway. With the windows down, the warm night air cooled as it roared around him.
He flicked the headlights on high. Their beams lit up the trees, telephone poles and bushes as they whizzed by. Nothing could stop him as long as he kept his foot down hard on the gas pedal. Then something did.
Pulling to one side of the deserted road, he jammed the gear shift into park, jumped out, ran around to the back bumper, bent over.
And puked his guts out onto the warm asphalt.

Two On Tuesday: Blane Weston’s company needs the capital Matt Durand has, except she wants no part of him. She wants a journey to her past. He’s determined to be her future.

Sparks flashed in those bright green eyes that had so captivated him from day one. Except, just now he was sorely tempted to dodge out of the way so he wouldn’t get scorched by escaping flames.
“It’s my job to remember a lot of things.” Her gaze dropped away from his. “The appointment with you wasn’t one of them. I thought you understood that had been cancelled.”
“Guess nobody told me.” Though he couldn’t let her see him sweat, a frantic voice screamed at him this wasn’t going to work. Ignoring it, somehow he kept his composure as he slowly shut the door. “I had some questions.”
“About Weston?” She picked up some papers she moved to the left corner of her desk. “Galloway, or do you still represent the Dorman involvement with Advanced Properties.”
“None of the above.”
Leaning forward, she leveled a wary gaze on him. “What do you want then?”
With a deep breath and a prayer, he pushed off from the doorway. “You.”

One Fateful Friday: Jake Holbrook regrets his single state. When Bethany Thomas, a special woman from his past tumbles back into his life—and his bed—he’s determined to keep her.

“You’re certainly eager to help.” Bethany glanced over at Jake as they collected stacks of dirty dishes to carry into the kitchen.
The china he took care to place on the counter clattered. “Why would I pass up a chance to be alone with you?”
Smiling, she began to fill one side of the double sink with warm water and squired in some blue dish soap. “Lana seems nice. She’s a good fit for Joey.”
“She’s a good fit for the family.” Taking an assortment of plastic containers from a lower cupboard, Jake filled different ones with leftover stuffing, gravy and mashed potatoes. “They seem happy together. Joey’s a lucky guy.”
Switching the still running faucet to the other side, she passed some of the serving dishes he emptied under the flow before she positioned them in the dishwasher. “You’re jealous of him.”
Though her words were tender, the idea behind them stung. He turned his back to open the refrigerator and began to stack the containers of leftovers on the middle shelf. “Yeah, I guess on some level, I’ve always wanted a family like he has.”
“Me too.”

Saturday In Serendipity is available on Amazon.

My days to blog here are the 11th and 23rd. For more about me and the stories I write, please visit my WEBSITE
Posted by Margo Hoornstra at 12:01 AM

You are so right, Margo. It's good to be home. I never used to feel that way. I loved vacations with the lazy days. Maybe I'm getting to be a homebody in my old age. :)

We were camping, Diane. Albeit in a trailer with all the comforts of home, but still, it wasn't actually home. Nice to be here now.

The plants look great and your book even better! Right now, in the middle of boxing 2000 pounds of garlic, a vacation anywhere sounds like heaven.

Remember, Brenda, with that garlic crop you are providing a much needed service to mankind. Thanks for the nice plant (and book) comments. As noted, the plants did that on their own. ;-)

Plants do a lot on their own, we've decided, Margo. LOL

It's wonderful to get away but even better to get home and sleep in my own bed! What a great little garden. Our tomatoes are just starting to come in. I wish you many more treats from your garden!

Home grown tomatoes are the absolute best, Melissa. With my gardening expertise (NOT) I'll take what I can get.

The lake looks beautiful! Glad you enjoyed yourselves there. I'm currently on a mini-vacation at my mom's--eating all her home-grown tomatoes. Yum is right! I head home tomorrow.

Home grown, home, home. All sounds good to me.

Even after a winter visit to Hawaii, I am always happy to return to my lake. It needs me! Nice post and happy gardening.

Jannine. That's actually what they call a pond, created by a man made dam. Yeah, I couldn't believe it either. Your mom's tomatoes are a week or two ahead of mine. Safe travels on your way home.

Home is good, Rohn. Thanks for stopping.

Betsy. I've lived around water all of my life. Don't think I could survive any other way. Malibu, huh? Sounds interesting.

Thanks, Susan. The happiness is for the plants. They do all the work!

Ah...so the secret to the garden is to leave it alone! (Head smack.) :-) I've suspected as much many times. So glad you returned to all that bounty! Love your excerpts as well!

Thanks, Leah. Yep. Sometimes it seems the longer I stay away, the better my vegetation does.

It sounds as if you had a lovely time at the lake, Margo. I understand about the garden. I'm not much of a gardener either. The plants in my garden love to see me go on vacation too. They are never as glad for me to return home as I am. They live in fear of being mistaken for weeds. Unfortunately, their fear is justified. ::sigh::

Margo, I learned that plants do better if they are somewhat neglected. Don't you love that?

LOL, Jolana. Me too. Which is exactly why mine did so well. Absence makes the heart... and all that.

Anything that thrives from being somewhat neglected is fine with me, Rolynn!

So glad you had a nice vacation, beautiful rainbow and all, Margo! The tomato and green pepper looked good enough to eat! lol Bet they were delicious! Best of luck with your latest release! I love reunion stories!