A long road to D.C. by Leah St. James

I originally had planned an entirely different post for this month – something about weird nonfiction titles – but reading Jannine’s blog on Tuesday got me thinking about my own experience with that first trip to drop a kid off at college. Suddenly I was feeling nostalgic, so I hope you don’t mind my indulging in a trip back to the fall of 2002.

My older son – one of those kids who soaked up knowledge effortlessly, and got the grades to prove it – was heading to his first year at George Washington University...a whole mile or so from the White House. He’d been accepted early decision shortly after 9/11, so half my head was full of possible terror attacks, and the other on all those normal fears parents have – will he fit in, will he do well in classes...how often will he be calling for money. :-)

Move-in day dawned with a downpour, and we were soaked by the time we crammed all his stuffed into my car. Smelling like wet dog, we buckled ourselves in, ready to battle our way south from Jersey to D.C. on the ever hospitable Interstate 95.

We’d made it to the Garden State Parkway (like five miles) when he turned to me and said, “Mom, I don’t want to go to college.” (Looking back, I’m amazed I didn’t wreck the car.) My response:  “Tough. You’re going.”

I don’t remember much about the rest of the ride, but I have to tell you I was tempted to turn that car around and give in to his sentiments. But I knew it was probably fear of the unknown – certainly not a desire to stay home – and he’d regret it if I did. But the day was not without its challenges.

When we got to his dorm, it was pretty normal chaos with a gazillion other parents dropping kids and all their paraphernalia piled on the sidewalk while frenzied parents fought each other over the handful of carts.  (I remember one girl whose “stuff” took up about the size of a city bus. At that moment, I was so thankful to have boys.)

The line eventually moved, inches at a time, until we made it inside the actual dorm building to discover that only one elevator was working.  I was going to attempt walking until I realized he was on the 7th floor.

I think we were both too exhausted for a tearful goodbye, so after giving him a quick hug and extracting a promise to call every so often, I headed out into the city.  I found my car, got in, started her up and  turned onto a one-way street...in the wrong direction.

That’s when I pulled over to the curb, dropped my face in my hands and sobbed.

About ten minutes later, I pulled a U-turn and headed home.

When told him later about going the wrong way on the street, feeling lucky I hadn’t been ticketed, he said, “Mom, D.C. cops don’t care about traffic laws. They’re too busy watching for terrorists.” (Sigh.)

Now, 13 years later, I’m happy to report that all has worked out well. He got his bachelor’s and master’s degrees from GW, and is currently a Ph.D. candidate at Penn State in Harrisburg (all but dissertation).

This year he received a teaching award (something like ten awarded for the 6,000 or so grad student assistants at Penn State University). I'm not trying to brag....well, yeah, I am. I'm so proud of my "kid." :-) 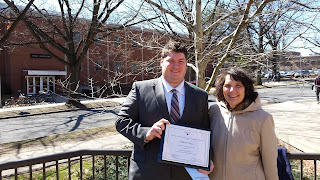 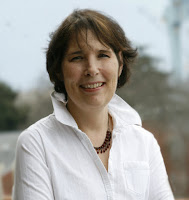 Leah writes stories of mystery and romance, good and evil and the redeeming power of love. For more, please go to leahstjames.com.

She hangs out mostly on Facebook with occasional spurts at Twitter (especially during college football season). You can check out her Pinterest boards here.
Posted by Leah St. James at 6:27 AM

Wonderful post, Leah. Now you've got me being nostalgic. Seeing our kids take that big step without us (worse than kindergarten) is such a scary, proud moment. You have a right to be proud of your son's accomplishments. You & your husband must have done a great job raising him.

You have a right to be proud! We haul Tara (and her mountain of stuff) to Berkeley tomorrow. No backwards on one way streets anticipated--my husband will be driving!

Heart-wrenching story, Leah. Goes to show that even a bright college freshman needs to be told what to do in a moment of pure teenage angst. Way to be tough when you had to be. How proud you are!

Fantastic story. We've done the drop off four times. Each was different in a wonderful, bittersweet way. Great come back there - Tough! You're going. What else could you say!? Congratulations on having one great and smart kid!

I love your story - it takes me back to our drop off in '04. I'm so glad I'm not the only one whose brilliant child had last minute nerves about going to college. I tried not to dwell on the fact that I was leaving my precious baby on the South Side of Chicago. I'm sure you felt the same way about D.C. Happily, they're both alive, well and thoroughly educated!

Great post, Leah. Had a similar experience when my son went away to prep school at age 15. Alls well that ends well.

Diane, It really was so much scarier than kindergarten, wasn't it? I think about parents whose children are heading off to the military, and how much more difficult that must be.

Good luck with Tara's move-in day today, Jannine! I expect to hear some good stories at some point. :-)

Rolynn, "Teenage angst" was a perfect description! Boy, I'm glad those years are behind me.

Each time is different, Margo. You're right. I only ended up doing it one more time with my #1 son. He came home after his freshman year, moved back for sophomore year and never moved back home after that. (I've tried to NOT take it personally, but rather as a reflection of how well he'd adjusted!) :-)

Yes, Alison, the South Side of Chicago would be pretty darn scary. I'm glad to hear your story ended well also!

Thanks, Brenda. Prep school at age 15--now that would have given me more than a few grays!

Sorry I'm late to comment. What a heartwarming story. I'm sure you are so proud of your son, and I bet he's equally proud of you.

Thank you, Alicia. He is proud, but has declined to read any of my romance stories, and I'm just fine with that. :-)