My Daddy, My Hero by Alicia Dean

I thought since Veterans Day falls in November, and our posts are about giving thanks, it would be fitting to write about my dad. He was a World War II Veteran (way before he met my mother and they had me and my five siblings). He never talked to us kids about his experiences over there. He would discuss the war in general, but not in personal terms. I always wondered if it was because he wanted to protect us, or if it was because the memories were just too horrifying. I suspect it might have been a combination of both. Since he never spoke of it, I had no idea that he was one of Darby’s Rangers. I only learned that a week ago on Veteran’s Day when I posted his military picture on Facebook and my cousin told me in the comments. That’s something pretty special, pretty impressive, yet he never boasted about it that I know of.

Here he is when he was seventeen. He enlisted in the army when he was sixteen (he lied about his age), in 1941, and went to war. 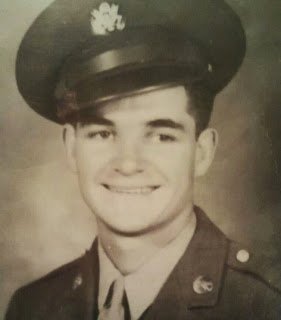 As impressed as I am about my dad’s service to his country, I’m most impressed at the kind of husband, father, and grandfather he was. Although we like to paint people as perfect in our memories, I know he was far from perfect, but he was everything I could want in a father. Daddy was gentle, funny, strict, protective, encouraging, and very proud of his children. He passed away on December 21, 1994 (Yes, four days before Christmas. That was the worst Christmas of my life), before I became published, but I know he would have been extremely proud of me. His name was Dean Robertson (actually Doffies Dean Robertson, but no one other than his family called him Doffies). I took his name, Dean, as my pen name when I started writing. I thought maybe somehow he knows I’m paying tribute to him in a small way. I would not be who I am or where I am without him. (Or without my mother, but that’s for a different post. :))

I have some amazing memories of my father. Among them, watching major league baseball with him and my sisters (it’s odd, but out of the six siblings, only one is a boy, and he is the only one of us who does not like sports). When we were young, each year on our birthday, Dad would take the birthday child out to dinner, and only the birthday child. In a household of six kids, that was quite a treat. When we were sick, Mom would always hold us or sit by our bedside, give us medicine, and do her best to make us feel better, while Dad would go to the store and get us whatever we wanted/needed (within limits, we didn’t have a lot of money growing up). They were quite a team. :)

One thing that stands out in my mind about Dad was his quick wit. He was so funny, everyone thought so, that was kind of his ‘thing.’ I know there are funnier stories, but most of them are ‘you had to be there’ kind of stories, or would involve a lengthy explanation. So, I’ll share this little tidbit:

Dad, Mom, myself, and a few of the other kids went to Mr. Burger drive through and Dad ordered for us. The girl said, “Would you like your drinks in a sack?” And Dad said, “No thank you, we’d rather have them in cups.” LOL. Not the funniest thing he ever said, but it was cute and quick-witted.

I could go on and on about my dad, how he played guitar and golf equally well, how much he adored his grandchildren and how much they adored him, how precious he was to his nieces and nephews, how many friends he had who loved him dearly, etc, etc, but you would just have had to know him to really understand. And those who did know him were very fortunate.

On the night he died, I was working at General Motors and my then-husband called to let me know Dad had had a heart attack, and I needed to get to the hospital. By the time I arrived, he was gone. I didn’t even get to say goodbye. That was torturous to me. The man who had given me such a wonderful childhood, who had been so loving, was gone. And I hadn’t had the opportunity to tell him how much he meant to me. For weeks I didn’t sleep well. I was antsy and sad and dissatisfied. One night I got out of bed and wrote the below poem. I am far from a poet, and I know this isn’t even real ‘poetry,’ but for me, it was cathartic. I was finally able to sleep, but I still haven’t stopped grieving.

Had I Known That You Were Leaving

God called you home so quickly,
There were no warning signs
I only wish I'd known that day,
I was seeing you for the last time

Had I known that you were leaving,
I'd have sat with you a while
I would have told you funny stories,
anything to make you smile

Had I known that you were leaving,
I'd have kissed you tenderly
I would have hugged you very tightly,
and held you close to me

Had I known that you were leaving,
I would have told you how I feel
That I can't imagine life without you,
even now it seems unreal

Had I known that you were leaving,
I'd have held your hand in mine
I would have pressed it tightly to my cheek,
felt your warmth just one last time

But maybe it was best this way,
that God was the only one to know
For had I known that you were leaving,
I'd have never let you go

Our parents never leave us. Even when they pass, they live on in our memories, our thoughts. I feel my mother's presence every day. From your lovely essay, I know you feel your father's presence as well. Thank you so much for writing this powerful essay and heart-rending poem.

Thank you, ladies. yes, Betsy, I feel his presence very strongly. He was so special. Fortunately, I still have my mom. She's in a nursing home, but I go see her once a week. She still talks about Dad with a spark in her eye and tells the story of when they first met over and over. :) Thanks for the kind words.

I've lost both my parents far too young. Thanks for the lovely share, Alicia. :)

What a lovely tribute to your dad. Thanks for sharing him with us, Ally.

A lovely tribute and poem. Made me cry.

Beautiful, Ally. Don't doubt for a moment that your dad isn't still with you. Thanks for sharing.

Lovely tribute to your dad, Alicia. He sounds like a great father. You mentioned he was 16 when he enlisted. I can't imagine letting my son go off to war at that age. Any age, but not so young.

Thanks all...yes, Margo. I feel like maybe he's with me and knows what's happening in my life. It's comforting to think so, anyway. Yes, Diane, much too young. He came from a very poor, very bad home life, and he needed to help support his siblings. I don't think his parents protested much, if at all.

This was hard for me to read, but so very beautiful. I lost my father in February at the age of 85 and was lucky enough to see him several times toward the end. I can only imagine what you went through losing your dad so unexpectedly.

What a lovely tribute. :-) Thanks for sharing your memories of your dad. I feel better for having read it.

Alison, I'm so sorry. I know how difficult a time you must be having. I lost my dad 19 years ago, and the wound is still there, it's just not as fresh. It's never easy to give them up, is it? It was very difficult. I never expected to hear that kind of news when I got to the hospital. Thanks for your kind words.

Aw, Leah. You're a sweetheart. Thank you for allowing me to share my memories of my dad. I have tons of good ones. :-) Thanks!

i understand this, so deeply in my heart.
Hugs. A beautiful tribute.
--Kara

Thank you, Kara. Big hugs to you.

Loved your post, Alicia. Your poem hit home and touched me deeply. I'm sure your dad is smiling down at you.
Thank you

Wonderful tribute. My father was my biggest hero, too. Having a dad like him really solidified my ideas of what I wanted in a husband and the type of man who appeals to me in books. I owe him so much.

What a sweet tribute to your dad! He sounds like a very special man and I know he must have given you a lot of love because you are a very giving, generous and loving person. The story about the drive-through and wanting the drinks in a cup cracked me up!
He would definitely be proud of you, and you were lucky to have each other for so long. xx

I can verify this story since I am one of the five siblings mentioned. This is an amazing tribute to daddy!! And its 100% accurate. He was so, so funny! So, so loving...just amazing in every way. I will never know how he did it, but he did!! I remember reading this poem for the first time. We were all grieving & hurting so bad! But...you put on paper what we were feeling & thinking but didn't know how to release it. You took care of that for all 6 of us. For that & so many other reasons...I love you, my precious sister!!!

Thank you, Rose. I'm glad the poem touched you. I'm sure he is too. It's strange how I still miss him after all these years. I guess it never completely goes away.

Thanks, Patricia. It's great to be able to say that about your father. We're luck, aren't we?

Aw, Joya. You're so sweet. Thank you so much for the kind words. Yes, he was very, very special. Everyone adored him. My mother is an amazing person too.

LOL. Yeah, Dad had a lot of little zingers.

I love you too, Ruth. Thank you for sharing your thoughts. And for confirming my story. This is a group of writers, so we seldom tell the truth ;-) At least they know this isn't fiction. LOL.

It is this type of interesting thing with this post of yours. I had been interested with all the topic along with the flow in the story. Keep up to date the truly amazing work.
toga costume

Oh, wow. I'm crying at work--and this time it's not because of the middle school kids. What a lovely post, and a beautiful tribute to your father, Alicia. I can definitely see the family resemblance. And now I know where that quick wit of yours originated. "Would you like your drinks in a bag?" LOLOL!

I didn't mean to make you cry, Anna. :-) He was something else, that's for sure. Thank you for the kind words. LOL. yeah, the poor girl was a little confused. That was in the day before drink carriers, and when Dad said that, she paused, then said, "Oh, we'll put them in cups first, sir." Hahaha.