Back in college I ran with a very different group of friends. We were all into the "California thing," whatever that was. For some, it was sex, drugs and rock and roll. For others it was nude beaches. And for yet others it was looking for a new spiritualism, because organized religion didn't fit our needs.

I studied Zen and Yoga, not so very different in their approaches to meditation. I learned to sit for long periods, emptying my mind and concentrating on being in the here and now. I read Carlos Castanada and wondered if his Yaqui shaman was real or fantasy. I didn't believe he turned into a crow, but I thought some of his teachings could be real. At least, they resonated with me in my search for the spirit world.

Thanksgiving of our senior year, when the hippie movement was in high gear, my friend Jackson invited the group to his family celebration in Arizona. Hey, from UCLA to Arizona wasn't much of a trip. We fell into two beat up cars and headed east. I knew Jackson was raised on the res, as he called a reservation. I imagined noble Indians (they weren't Native Americans back them) living in simple houses, living simple lives. I didn't imagine house trailers and grinding poverty. I didn't imagine chronic alcoholism and unemployment. 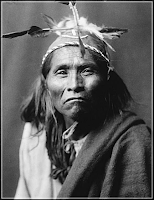 Jackson told us about his childhood on the road to the res. "It wasn't all bad," he said. "Just wait till you meet Great Uncle." And then he said nothing more.

We buzzed in the back seat about this great uncle. Was he a chief? Was he a shaman? Was he a medicine man?

Turned out, he was both a shaman and a medicine man. The closest thing the extended family had to medicine was the traditional medicines Great Uncle's grandmother had taught him. It was his status as a shaman that drew us to him. We wanted to see images, feel connected to the earth in ways we'd never experienced. And we did.

One night, Great Uncle took the group out to a small rocky outcrop a few miles from the cluster of trailers. We rode horseback under a waxing moon. After tethering the horses, Great Uncle lit a fire and started chanting. I didn't need to understand his words to feel them powerfully in my soul. He passed around small peyote buttons and showed us how to chew them. We did.

The next day we shared the drug-induced images. Some were terrifying. Great Uncle helped two of the group understand what they feared. Two saw a kaleidoscope of colors, swirls and whirls of light and sound. My image was nearly silent. I felt the earth's heart beating under my body. I saw distant lights and half-formed beings. Great Uncle said I had connected with the spirit world, which was neither dark nor light, solid nor amorphous.

I don't think I spoke two words for a day after Great Uncle interpreted our dreams. I have never forgotten what he said, how kind his age-dimmed eyes were. He taught us to see with different senses, with different eyes and to accept what we saw. Great Uncle passed into the spirit world the next summer. His family guessed his age at somewhere past 80, but he had no records to prove it.

Long gone, Great Uncle lives on in my heart. (And no, this is not a picture of Great Uncle, but it could be.)
Posted by Betsy Ashton at 12:30 AM

What a great experience. You're right, one to never forget. We are so fortunate to have so much live in our hearts

Betsy, you're one cool lady. I'm enjoying your stories from your youth. What an experience!

Thanks for sharing. Sometimes the things that touch our hearts are the hardest to describe and share.

Jannine, I'm not sure my mother was too thrilled when I took off for the res, so I never told her about the peyote. Somethings were best not talked about...

Oh wow, you've had such an interesting life. What an experience that must have been. Thanks for sharing!

What a neat story, Betsy!