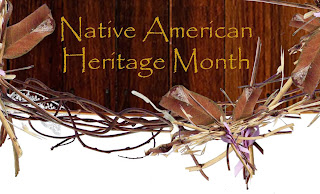 The month of November is a lot of things. For some, it's a time to write with National Novel Writing Month kicking off on November 1. For others, it's a time for family with Thanksgiving right around the corner. For others, it's time to hit the stores because the Christmas holidays are coming up fast (if those early holiday commercials are any indication). It's important, though, particularly for me, to remember throughout all of this that November is also Native American Indian Heritage Month. I can't trace my ancestry back to those Indians who helped the pilgrims all those years ago...but my mother's family does have some ties with the Cherokee of Tennessee. That being said, I'd like to dedicate my post this month to Native American culture and its role in shaping the spirit of western lore....

I happen to write western fiction. Western romance, that is. Contemporary western romance. But if you go out west where cowboys drove their horses and cattle, even today you'll find heavy traces of the Ol' West. I think that's why we still find cowboys and ranches and rodeos so alluring. It's that fascinating whisper of what was. So much of fiction set throughout the West is derived from its people, culture, but maybe especially its setting. While researching my next western romance trilogy (yay!), I discovered an irresistible story backdrop - the Black Hills.

The Black Hills is one of the most storied mountain ranges in the American West. The knuckles of the range itself reach across the border of South Dakota into Wyoming. In contrast to other western mountain ranges, it is small (Harney Peak, the highest summit, is only 7,244 feet) and remote – far removed from the Rocky Mountains. An “island of trees in a sea of grass,” the Black Hills is home to the tallest peaks of continental North America east of the Rockies. Because they are covered in trees, the mountains appear dark in the distance. Therefore, the Lakota named the region HeSapa, or “Black Mountains.”

The Black Hills were first inhabited by Native Americans around 7000 BC. Among the tribes that called the range home were the Arikara, Cheyenne, Crow, Kiowa, and Pawnee. Finally, in the eighteenth century the Lakota made the Black Hills their home by driving out the other tribes. Much of Lakota culture is central to the Black Hills. Both the Cheyenne and the Lakota believed that the region was the axis mundi, or "sacred center of the world." However, in the eighteenth and nineteenth centuries, the discovery of gold caused many European Americans to flock to the Black Hills. Soon after, the last major Indian War on the Great Plains, known as the Black Hills War, unleashed. In violation of a treaty with the Native Americans, the United States seized control of the land. As late as 1980, the Supreme Court ruled that the Black Hills had been taken illegally from the tribes. The Lakota refused a settlement of one-hundred-and-six million dollars, citing that they wanted the return of the Black Hills to their people. To this day, they persist in their quest to reclaim their land.

In the late nineteenth century, thousands of gold miners descended on the mountain range. In 1880, there was no part of the Dakota Territory more densely populated than the Black Hills. The cities of Deadwood, Central City, and Lead formed amidst the great surge of pioneers. Railroads also began to crop up. Since 1880, the gold mines of the Black Hills have earned four million dollars a year with an additional three million dollars in silver.

The Black Hills are covered mostly in fragrant Ponderosa Pine and Black Hills Spruce. Though scattered throughout the range are picturesque grasslands in lieu of forests, home to mountain meadows or “open parks.” The wildlife of the Black Hills is very diverse. It is actually known as a “mixing and meeting place” where species from all parts of the north, south, east, and west go to mingle. For example, both the forest and grasslands create great habitats for American bison, a variety of deer, mountain lions, prairie dogs, marmots and fox squirrels in particular. The creeks that run through the Black Hills are known for their trout fishing.

Tourism is a large part of the Black Hills economy. The range is home to Custer State Park, South Dakota’s largest state park and one of the largest in the United States. In August, the Sturgis Motorcycle Rally takes place on the scenic roadways scattered throughout the Black Hills. In 2005, more than 550,000 bikers took part in the rally, bringing more tourism and revenue to the area. Famous sightseeing gems like Mount Rushmore National Memorial, Wind Cave National Park, Jewel Cave National Monument, Harney Peak, Bear Butte State Park, Devils Tower National Monument, The Crazy Horse Memorial (which is the largest sculpture in the world), and George S. Mickelson Trail also bring people from all around the world to the Black Hills.

Another vital part of the Black Hills community and economy is sheep and cattle ranching. And yes, Roses, here we find our cowboys! It's not hard for me to imagine my trilogy of heroes and their dude ranch nestled in a picturesque valley with those wondrous "Black Mountains" on the horizon and all that history and ghosts from the past waiting to be uncovered. I really can't wait to explore both the characters and those beautiful Black Hills - their landscape and history. 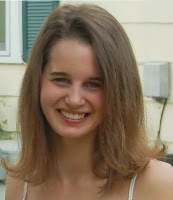 Amber Leigh Williams lives on the Gulf Coast. A southern girl at heart, she loves beach days, the smell of real books, relaxing at her family’s lakehouse, and spending time with her husband, Jacob, and their sweet, blue-eyed boy. When she’s not running after her young son and three, large dogs, she can usually be found reading a good romance or cooking up a new dish in her kitchen. She is represented by Joyce Holland of the D4EO Literary Agency. Find her on the web at www.amberleighwilliams.com!
Posted by Amber Leigh Williams at 1:00 AM

Thanks for that bit of history on a fascinating area, Amber. I love the whole idea of the old west, and this seems like a perfect setting for your new trilogy--even if it is modern cowboys!

Thanks for sharing such interesting facts about the Dakotas. I've been there and the scenery is striking. Love 2 movies set in S.D. North by Northwest and the 2nd National Treasure movie.

Great information about the area, Amber. Thank you. This summer, we plan to make a long awaited, and twice postponed, trip to the Black Hills. You've given us a start on what to see. Best of luck with the series.

Jannine, it is the perfect setting, isn't it? It's been a long time since I've been this excited about a story's setting. The cowboy characters aren't half bad either, lol ;)

Diane, I wish I could visit the Black Hills before writing my cowboy trilogy. If the hub hadn't given up his motorcycle in the spring, I'd be really tempted to join the motorcycle rally.

I visited the area about ten years ago, before the Crazy Horse Monument was completed. I'd love to return and see it now. The prairie dogs at Devil's Tower, too! And if we're citing movies, don't forget that sci-fi hit, filmed at Devil's tower - oh, gosh, now I forget. Wasn't it Close Encounters? of the Third Kind? Anyway - love the post! Thanks.

Thanks Ashantay, I would love to see the Crazy Horse Monument as well as Devil's Tower! I'm glad you enjoyed the post :-)

Oh my...sounds fascinating. I bet it's a beautiful area...and so rich with history. Thanks for giving us a glimpse!