Join The Roses in welcoming our guest, JoAnne Myers today!

When it comes to fiction writing, almost anything goes. That is why I love writing paranormal and fantasy stories. The author can go completely over the edge and make something unbelievable seem believable. When it comes to ghost stories, I get a lot of my inspiration from real life experiences. Not necessarily my own either. I watch television programs that partake of the supernatural and paranormal flare. Programs from ordinary people who claim they experienced either an afterlife experience, or a haunting.
Some of my stories from my upcoming release “Wicked Intentions” is based on actual hauntings. Some stories I read about in the newspaper, and others I watched on true life experience programs. So the next time you get “writer’s block” try switching on the television. You might find something to jolt your inspiration. 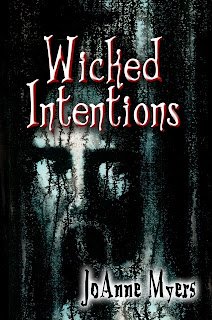 Blurbs for Wicked Intentions-available now
BLOOD TIES- word count 15, 902
After the mysterious disappearance of twenty-six year old wife and mother Lisa Smalley, her twin, Attorney Audra Roper, begins having dark and disturbing visions of Lisa’s disappearance. Trying to survive while looking for Lisa, Audra’s life becomes a roller coaster of risks, heartbreak, and intrigue.
THE HAUNTING OF BARB MARIE- word count 9,845
Even as a child, Barb Marie saw dead people. This took an unhealthy toil on her throughout her childhood and young adulthood.
SUMMER WIND-word count 13,039
When twenty-nine year old Ginger discovers the old mansion Summer Wind, she is mysteriously drawn to it.  Immediately, the haunting’s have a negative and profound effect on the family.
THE TRUTH BEHIND THE LIES-laying the Norfolk ghost to rest
Solving the brutal murder of American born Ruthie Geil becomes a gauntlet of attacks and more murders for Federal Police Inspector Ian Christian. Between the victims family, ex-lovers, and ghostly occurrences on Norfolk Island, the killer is closer than anyone realizes.
THE LEGEND OF LAKE MANOR-word count 8,297
For the young psychic Cassandra Lopez, coming to the infamous and haunted mansion Lake Manor, was more like a mission.
THE APARTMENT-word count 5,188
When young newlyweds Bill and Gayle move into their new apartment, their lives are plagued with sightings of evil ghosts that threaten their marriage and lives.
DARK VISIONS-word count 5,170
When Carrie Reynold’s starts having nightmares on her twenty-sixth birthday, she believes her “dark visions” can solve the twenty year disappearance of her father.
Also available:
“Murder Most Foul,” available here: www.melange-books.com/authors/joannemyers/MMF.html
Here is the link to buy it directly from LULU:
http://www.lulu.com/shop/joanne-myers/murder-most-foul/paperback/product-21183493.html
BLURB: When two dismembered torsos wash up on the banks of the local river in the small industrial town of Pleasant Valley, residents are horrified. Between contradicting statements, police ineptitude, lust, lies, manipulation, incest, the motorcycle gang The Devil’s Disciples, crooked cops, and a botched crime scene, everyone becomes a suspect.
The young beautiful Jackie Reeves, a registered nurse, believes the killer is a man from her past. She contacts the dangerously handsome FBI Agent Walker Harmon. An arrest is made, but Harmon and Jackie believe an innocent man is being railroaded by local cops. Determined to find the truth, before anymore killings, Agent Harmon and Jackie are forced to run a gauntlet of deep trouble and turmoil, which marks them for death.
Other books soon available:
"LOVES', MYTHS' AND MONSTERS'," a fantasy anthology due out January 2014
“FLAGITIOUS,” a crime and paranormal novella collection due out 2014
"THE CRIME OF THE CENTURY," a biography true-crime available January 30, 2013
"TWISTED LOVE," a true-crime anthology due out 2014
Email: joannetucker98@yahoo.com

My website Blog: http://www.booksandpaintingsbyjoanne.com/page2
Posted by Brenda Whiteside at 6:00 AM

Sounds like some scary stuff, Joanne! I like ghost stories and finally wrote a ghost into one of my books. I discovered it isn't easy portraying a ghost! Thanks for visiting us today.

Thanks for sharing a little about your stories.

Scary stuff, indeed. Great design on your cover. I may get inspired and write a ghost story someday. Good to have you here!