The Nations In Me

At this stage of the generations of my family, I am quite a mixture of nationalities. The list goes something like this: German, Irish, Dutch, English, Souix, and two other tribes of Native American. I'm not sure what those other two tribes are but would like to find out someday. I'm sure that the intermingling of the Euroamerican with the Native American was frowned upon.

The next generation, my son, Nick and my daughter Amanda, have all of the above plus their father was 100% Italian, so that is added to their line. My younger daughter, Jen, is Scandinavian and English from her father. At least now, there is not much said against the mixing of nationalities.

The real mix is my granddaughter, Halle, Amanda's daughter. She is as follows: German, Irish, Dutch, English, Souix plus two other tribes of Native American, Italian, with Japanese, Chinese, and Filipino from her father. It's hard to believe there can be so many nationalities in one young girl. We joke that she can have World War 3 all by herself. If she should marry a man of Russian decent, I think her children will have the world pretty much covered.

The Native American was treated poorly by settlers and the government. In the late 1800s, it was becoming more and more difficult for the tribes to remain on their own land. In the west, the Paiute tribes in Oregon were struggling against the white man as well as each other. It was a difficult time for them. For a greater understanding of the situation, read more about the Bannon - Paiute War HERE. 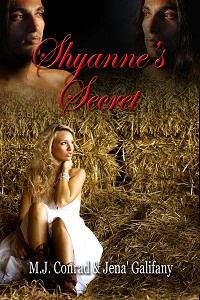 It was during this time in history that my novel "Shyanne's Secret" takes place. Here is a taste of the story.


Cole wasn't ready to face Rita after the morning he'd had.  He'd spent several minutes at a creek washing the mud out of his hair and off his face, clothes and the horse before he continued home.  None of them had scored a direct hit but had only splattered him.  He made his way toward home, not in the mood for a rematch with Dex.  After he dropped off the kitchen supplies on the porch, he continued into the barn to unload the bags of oats and other working items. Just because his Pa was gone didn't mean he'd let the farm fall to ruin or the animals starve. He moved past the variety of trees around the perimeter of the property and through the barn. He unhitched the gray, led him to his stall and brushed him down. He wanted to be alone, sort out his thoughts while he cleaned stalls.

By afternoon, as he walked through the cool of the barn, he inventoried the unfinished work that awaited him.  He was hot, tired and frustrated about what he should do with his life.  Should he be the one to leave, or should Rita go back to A.J.? After all, it was his father's property and didn't that make it his now that Pa was dead? If only the grant office would make up its mind. His half-blood status was being weighed over his right to inherit from his white father. Cole hated the idea that he might need Rita to claim the land so he wouldn't lose it. She could sign it over to him, then be on her way elsewhere, if it came down to that.

He wiped his brow on his shoulder and climbed the ladder to the loft.  He tossed his jacket into a corner that was piled with loose hay. He rolled up his sleeves, and sat on the pallet situated along the wall.  He closed his eyes, and recalled the hot summer days that he'd spent up here, listening to his Pa talk about how he and his friend, Martin Marshall had traveled out to Oregon for the free land the government was giving away.  The two friends had become brothers-in law when they'd married sisters; pretty squaws from a local tribe of Paiutes, when they found out they could get six hundred forty acres, a double portion of land if they had wives.

Pa told him how he'd come to love that pretty little Indian lady after he convinced her that he'd never sell her. She was terrified the day her daddy sold her to Seth and her sister to Uncle Martin. She thought he'd bought her for a slave.  Seth had trouble convincing her that he'd made her his wife. Seth and Martin both had trouble convincing the community to accept their wives, and more problems when they'd had to convince the town council to allow their sons born a few months apart to be taught in the school with the white children. That only lasted until Cole and Will were twelve. So much for an education, but they got the basics and learned to work the farms instead.

When Cole's parents were threatened, Uncle Martin got nervous and sent his wife and Will to stay with the tribe for safety. Cole missed his cousin but Seth couldn't do without his help. Cole felt he'd lost half of his spirit. The cousins were close and looked like twins, except that Will, the bolder of the two, was a bit taller and Cole's hair was a shade or two darker. They looked so much alike they delighted in causing minor trouble that the other would be blamed for. Four months after the Jackson murders, Uncle Martin brought his wife home but Will chose to stay on to learn more about his mother's people.

The gray plow horse in the stall below nickered, reminding Cole where he was. He missed sitting up here listening to his daddy talk. Opening the buttons on his shirt, he pulled out the turquoise stone that hung on a thin leather thong around his neck, a talisman his mother had gifted him with years ago. He held it in his hand when he missed her, and wished he could bring her back.

He collapsed on his back, one arm across his forehead as he contemplated the picture he'd drawn on the barn wall with a piece of charcoal when he was eight. Pa thought it was so grand he'd burned it into the wood so it would never fade. Cole once more envied the freedom that the wild mustang enjoyed.  In the midst of his thoughts, he remembered a certain smile and the kind blue eyes of Shyanne Bennett.

He wanted to talk to her, say the things he had never said to any girl before.  He wanted to tell her how beautiful her blue eyes are; how much he'd like to touch her golden hair, how much he wanted to be loved by someone – anyone.  If that someone could be Shyanne Bennett, nothing else would matter.  He closed his eyes, and savored his memories. 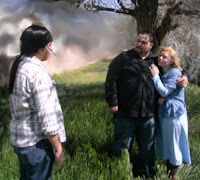 BACK COVER BLURB:
Cole Jackson promised to take care of Shyanne Bennett, to keep her secret. It was a promise he intended to keep—and then her father lynched him. It might take time, but he'll find a way.

Shyanne Bennett loved Cole Jackson, that sassy half-blood. She lost her mind when he died to keep her secret. Cole promised to take care of her but how can he once Harvey Bennett hung him? Maybe her heart will find solace in becoming the wife of his look-alike cousin, Will Marshall. And then again, maybe the heartache will only begin again.

From my family to yours, I pray you have a safe and special Thanksgiving.

Cheers!
Posted by JenaGalifany at 6:39 AM

A safe and special Thanksgiving back to you and yours, Jena. The blurb sounds fascinating. A blending of genres in and around the blending of nationalities we all come from.

Sounds like your family is an interesting mix. At this point, I imagine most of us are "mutts." I'm a lot English with Swedish, Danish, German, and French thrown in in dabs. Happy Thanksgiving back at you!

Nice post...and your book sounds very intriguing. I think I have a lot of the same Nationalities you do. Happy Thanksgiving to you!

Thank you for your kind words, Ladies. Have a good day.

A wonderful blurb. Adding this to my to be read list.
I'm 100% Polish.