Plymouth, Schlymouth...Virginia had the first Thanksgiving! by Leah St. James

If you were taught the same history lessons I was, you learned that Thanksgiving is the commemoration of a shared meal between the Pilgrims at Plymouth, Mass., and their neighboring Native Americans (the Wampanoag) in 1621. As the quick version of the story goes, the settlers were low on food, the “Indians” came by with some of theirs, and they sat down to a shared meal and gave thanks.

I have fun memories of sitting down in a classroom to our pretend Thanksgiving meal, half of us dressed in Pilgrim garb and the other half in “Indian” garb, all somehow crafted from construction paper.  (Teachers are amazing, aren’t they?)

Mixed in was the romantic story of “Indian” Princess Pocahontas who pleaded with her father, Chief Powhatan, to save the life of the captured Englishman Cpt. John Smith.

As a kid, I never quite got it that that famous incident with Pocahontas and John Smith happened about a decade earlier, and hundreds of miles away. In fact, they had nothing to do with Thanksgiving, other than the fact that both took place in southeastern Virginia near the Jamestown settlement.

You read that right. If you have a chance to travel to southeastern Virginia, to the site of the Berkeley Plantation on the James River, you’ll find a slight variation to the story. In fact, you’ll find a plaque claiming bragging rights as the “first official Thanksgiving” in the New World.

So how did that happen? A group of 38 English settlers, led by Capt. John Woodlief, made ground about 20 miles upriver from the Jamestown settlement in a plot of land now known as Berkeley Plantation (home of two U.S. presidents, btw). The group’s charter called for an annual observation of thanks to mark their safe arrival. This from a Wikipedia article: "Wee ordaine that the day of our ships arrival at the place assigned for plantacon in the land of Virginia shall be yearly and perpetually keept holy as a day of thanksgiving to Almighty God.”

Oh, okay…I cede the point to the Plymouth contingent that their later celebration is probably the root of our traditional meal. And I acknowledge that the Spanish explorers probably did the same as the Jamestown settlers about a century or so earlier, not to mention the custom of many Native American peoples to give thanks for a successful harvest (and more).

But as a Virginian from the Tidewater area (albeit one transplanted from New Jersey), I feel duty bound to uphold my region’s claim. (And if I could find that photo I took of the plaque, I'd post it here....)

In the meantime, here’s a link to Berkeley Plantation’s website where you’ll find the following illustration: 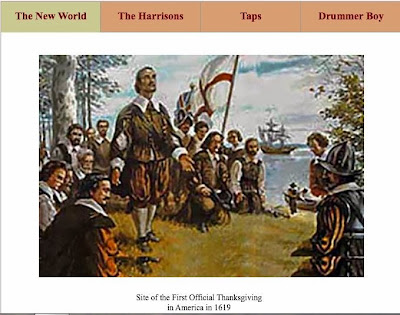 You can read more about the real “first” thanksgiving here and here.

You can read more about those other upstarts here:

Whatever side you fall on, if any, I wish you a joyous day of giving thanks with loved ones, full bellies, and, of course, that most American of pastimes—football.
Posted by Leah St. James at 3:00 AM

Nothing wrong with learning the truth. Thanks for sharing!
However you look at it, Thanksgiving is for sharing too.

What fun! I love to learn new facts. Thanks for sharing.

Fascinating...I had no idea! I would love to visit that plantation in Virginia. Sounds like it would be beautiful and rich with history. Thanks for sharing the little known nugget. Happy Thanksgiving!

It's interesting how certain groups get all the credit. Pilgrims, Columbus...what about the poor Vikings? I wonder if they had Thanksgiving? Thanks for the history lesson!

Great point, Margo! Hope you have a wonderful holiday.

Thanks for stopping by, Barbara. I'm a history nut, especially American history (although far, far from an expert). I love learning those individual stories that remind me that historical figures were living, breathing people who had feelings and heartache and joys, just like we do.

Alicia, I'd love to show you around if you ever do get to visit Virginia. I live near what's called the Historic Triangle, the area between Yorktown, Jamestown and Williamsburg. Lots of neat stuff to do.

Jannine, I was thinking the same thing after I posted this piece. What about the Vikings?! I might have to do some research! :-)

Fantastic, Leah. I would love to do that. Thanks for the offer.