The First Cowboy to Fall by Donna Michaels

Happy November, everyone! Using this month’s theme topics, my post about my upcoming Christmas release (available for preorder) could actually ‘fall’ into a few of the categories.
Fall into Winter:
HARLAND COUNTY CHRISTMAS takes place from the end of August to December, spanning through fall into winter.
Blurb
Accounting major Jen has one more year to earn her Masters before she graduates and moves out of Harland County to find a corporate job and maybe a good-looking businessman to boot. Cowboys were handsome and fun, but they didn’t stick. Neither did ranch hands. Experience has taught her they come and go, and some took a piece of her heart with them. Well, no more handsome, sexy, cowboys. She wanted a stay around, stable, lifetime type of guy.
Then she returns to the family ranch after a ‘hurrah to summer’ weekend with friends to discover Brock, the hot, one-night stand she’d given herself permission to enjoy, is the new ranch hand. And dang it, she’s just as drawn to his sexy grin, gorgeous green eyes and quiet strength. As the summer ends, classes resume, and the holidays near, the handsome, alpha cowboy has her rethinking her future. So does the unborn baby she’s carrying. Maybe sticking around Harland County isn’t so bad—if she could get Brock to stay, and break out of the ‘leave Jen and move on to another ranch’ mold.


Fall Overboard:
Set in Texas, this novella has my hero Brock Kincaid falling ‘overboard’ into a sea of debt his grandmother incurred from his late brother’s illness.  He did not plan to fall ‘over-his-head’ in love with the heroine. But, that’s just how I like to roll.


After the Delaneys left, he helped Jen carry the tea and glasses into the house and had to fight the urge to touch the woman. She’d been beautiful, and sweet, and caring, and he just wanted to soak it all in. Jennifer Dalton was a breath of fresh air he hadn’t realized he’d desperately needed.
He set the glasses in the sink and turned to find her watching him by the center island, appreciation swimming in her eyes.
“Thank you.”
He reeled back. “For what?”
“For being so nice to the Delaneys.” She set the pitcher on the butcher block counter and smiled. “Some people have trouble.”
“I know,” he agreed, completely floored by her insight. “I had a younger brother with special needs, and believe me, I’m well aware of the narrow-mindedness of the human race.”
Frowning, she stepped close to touch his arm, her fingers warm, and soft, and reassuring. “Where people mean?”
“Some were downright rude, others were very nice. Like you.” He cupped her face and stared into her fathomless eyes. Those gorgeous, sapphire eyes. “Cody would’ve liked you.”
Smiling, tears spilled down her face. “I’m glad.”
His heart cracked open. He was falling. Sunk. So far over the damn edge he couldn’t find a foothold. Pulling her close, he brought his mouth down on hers, tasting and drinking in her sweet essence. This is what he’d needed. This was what had haunted him for weeks now. Her hot, sweet taste, bold tongue, warm curves. She moaned and burrowed closer, slipping her hands under his shirt, touching, stroking him everywhere as he returned the favor.


Fall from Grace:
My heroine Jen Dalton never intended to fall from grace but her anxiety over her deployed cousin, raised as her brother, coupled with a margarita or three, add in a sexy, kind, concerned stranger, and they equal her first ever one-night stand.


Jen’s insides twisted into a tight knot at the mention of her cousin. He grew up at Shadow Rock, and was more like a brother than cousin. She loved Kade just as much as Kevin, and now he was in harm’s way.
Again.
The horse-whisperer had joined the Texas Army National Guard before he’d graduated high school, and eleven years later, he was still in. This was his third deployment, and with each one, she worried more, slept less, and admittedly wasn’t handling this one well. Always glued to the TV for updates. Days.
Nights.
Registering for classes had even been tough, especially with the mention of casualties in battle on the news. How the heck was she supposed to concentrate after hearing that? She’d managed, barely, then allowed her roommate and friends to persuade her to join them for a much needed ‘summer hurrah’ last weekend.  But, even at the laidback gulf resort, her gaze had been glued to the TV above the outdoor bar.
Until he sat down next to her.
Not her type. Hair a little darker than Sonny’s, smoldering green eyes, strong jaw covered in five-o’clock shadow, which were all actually pretty great, really great. The guy was gorgeous. It was the T-shirt, Levis and Stetson she didn’t like. He was a cowboy.
She swore off cowboys. And ranch hands. And any guy with anything to do with the rodeo circuit.
Especially clowns.  No clowns. They were just…wrong.
But he wasn’t. No. The stranger was a little bit of all right, and by morning, he was no longer a stranger. About the only thing they hadn’t shared were names. He’d called her sapphire and she’d called him cowboy, but once they’d gotten a room, they hadn’t done much talking.
HARLAND COUNTY CHRISTMAS
Prequel Novella 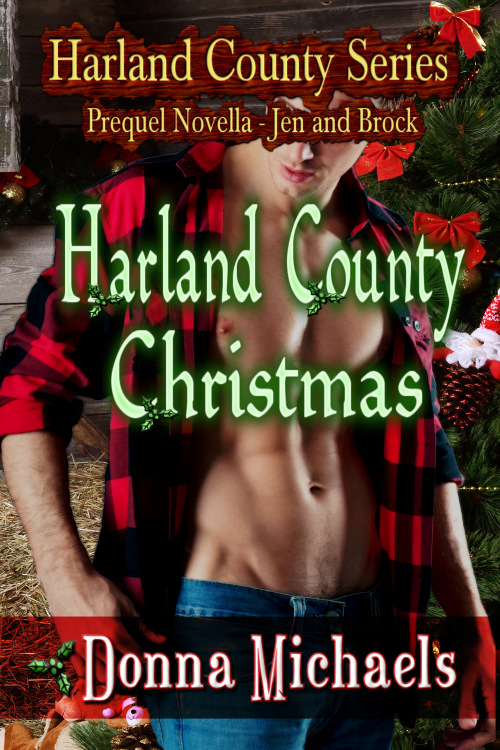 Releases Dec. 1st and is available for PreOrder  now!
http://www.amazon.com/dp/B00O3PON5G

If you've read HER UNIFORM COWBOY or HER FOREVER COWBOY and feel one deserves a vote, I'd sure appreciate the support! And if you like them both, but aren't sure which to pick, then I'd like to ask you to please vote for HER UNIFORM COWBOY to give the National Guard some recognition. Thank you!!

Voting is open until midnight November 21st!
http://btsemag.com/redcarpet/2014_ReadersChoice_Romance.html
Thanks for reading,
~Donna
Posted by Donna Michaels at 1:30 AM

Sounds like a great addition to your series, Donna. Best of luck!

Nothing beats an early Christmas present. Good luck with you newest book.

Make that your newest book. Hate it when that happens. ;-)

looking forward to reading this. the excerpts are great.

Love how you incorporated "falling" into your excerpts. Looking forward to reading this. Best wishes, Donna.

Thank you so much, everyone! It was fun revisiting the cowboys (who'd already had their stories) and 'see' them before they were tamed. hehe